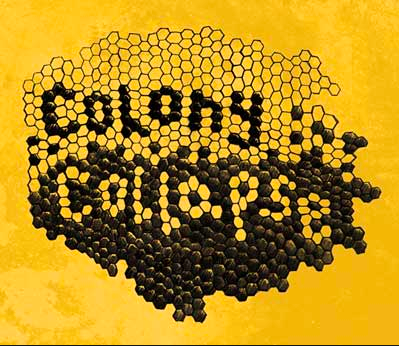 Honey bees are pollinators that have a strong influence on ecological relationships, ecosystem conservation and genetic variation in plants, with pollination occurring in a variety of ways: wind, animals, self-pollination and sexual reproduction. According to Greenpeace, an estimated 87.5% of flowering plants are pollinated by animals, and can increase fruit or seed in 75% of the world’s food crops1. Greenpeace also shows that although grains such as wheat, rice and corn rely mainly on wind for pollination, nutrient-rich fruit and vegetable crops, along with some fodder crops, rely on insects. Of all insect pollinators, bees are the leading species2.

The pollination process is integral to the production of our food supply and economy. According to the U.S. Department of Agriculture, “more than three-fourths of the world’s flowering plants rely on pollinators…[helping] produce one out of every three bites of food Americans eat” (Yearly Survey Shows Better Results for Pollinators, but Losses Remain Significant.” United States Department of Agriculture Agricultural Research Service. United States Department of Agriculture Agricultural Research Service)). Bees secure global diversity and food security for humans. A. mellifera, specifically, pollinates over 130 different species of fruits and vegetables, and is responsible for pollinating approximately 80% of all American agricultural food crops, worth an estimated $40 billion USD per year3. Thus, the effect of bees on the economy, as well as on ecosystem diversity, is significant.

Farmers use fungicides and pesticides to increase yield of production. These pesticides, including neonicotinoids, pyrethroids, cyclodienes, organophosphates, carbamates and oxadiazoles, have been shown to have an effect on the “enzyme activity, development, oviposition behavior, offspring sex ratios, mobility, navigation and orientation, feeding behavior, learning and immune function” of bees (Pettis 2013). This exposure to pesticides, along with the effects of invasive parasites, climate change and habitat loss, contributes to the declining global bee populations that have been occurring since 2006, especially in North America and Europe. Neonicotinoids in particular have received notable attention due to their potential risks to the ecosystem, as “chemicals persist in the environment, thereby promoting their contact with non-target organisms such as pollinating bees” (Williams 2015).

In order to investigate the actual impacts of the pesticides, scientists gathered pollen from different crops such as almonds, apples, blueberries, cranberries, cucumbers, pumpkins, and watermelons. While analyzing the pesticide concentration in each pollen sample, the scientists put the main focus on the total number of pesticides, dividing the results into 10 different categories: insecticides, fungicides, herbicides, carbamates, cyclodienes, formamidines, neonicotinoids, organophosphates, oxadiazines and pyrethroids. Scientists also collected 210 healthy honey bees from Bee Research Laboratory. The bees in the experimental trials were all equally healthy, which effectively made the honey bee’s initial health a control variable. Bees were fed pollen for 2-4 days in order to examine the impact of the pesticides ((Pettis, J. S., Lichtenberg, E. M., Andree, M., Stitzinger, J., Rose, R., & VanEngelsdorp, D. (2013, July 24)). 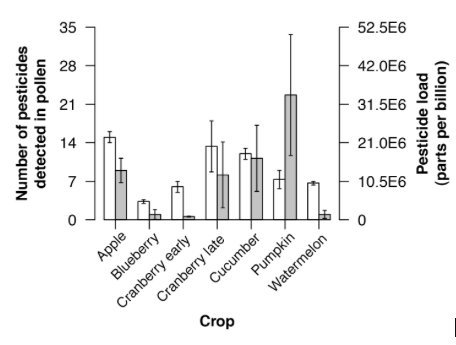 35 different pesticides were detected in the sampled pollen, including high fungicide loads. The insecticides esfenvalerate and phosmet were at a concentration higher than their median lethal dose in at least one pollen sample. While fungicides are typically seen as fairly safe for honey bees, we found an increased probability of Nosema infection in bees that consumed pollen with a higher fungicide load. Nosema infections contain intracellular parasites that can multiply in living honey bees, and deteriorate their immune systems. Once the bees are affected, they have difficulty reproducing and nurturing offspring. Infection in autumn can also lead to poor overwintering and performance in spring. Queen bees can also be superseded when affected.

It is interesting that in general, there were a lot of fungicides found in pollens. The research suggests that exposure to heavy fungicide loads can make bees more sensitive, increasing their risk of being infected by the Nosema disease. Scientists also found that a few pesticides, such as Esfenvalerate and coumaphos, play a role in Colony Collapse Disorder, one of the main threats to bee colonies. These results suggest that insecticides used to help the growth of plants are actually detrimental to pollinator’s health.

What is concerning is not only the fact that 35 pesticides were found from the pollens, but also the fact that the concentration of some pesticides were very high. Esfenalvalerate, for example, was “measured at 0.216 ppm n pollen collected by bees in a cucumber field, and phosmet (LD50?=?8.83 ppm) at 14.7 ppm in one apple orchard”4.  Data of the scientists suggest that some of the bee colonies are being exposed to dangerously high concentration of pesticide loads. Moreover, research suggests that simultaneous exposure to pesticides can have lethal effects on development, reproduction, learning and memory, and foraging behavior.

Apart from Nosema infection, insecticides like neonicotinoids have also produced detrimental effects on the queen bee’s health, which is crucial to the survival of bee colonies. As noted in a study conducted to show the effect of neonicotinoid exposure to queen bees, “queen failure has been proposed to be a major driver of managed honey bee colony losses, yet few data exist concerning effects of environmental stressors on queens” (Williams 2015). As such, the study focuses on the reproductive success, anatomy and physiology of the queens after being exposed to the pesticides. The hypothesis of this study was that “exposure to field-realistic concentrations of neonicotinoid pesticides would significantly reduce honey bee queen performance due to possible changes in behavior, and reproductive anatomy and physiology”4. This hypothesis was tested by exposing “developing honey bee queens to environmentally-relevant concentrations of the common neonicotinoid pesticides thiamethoxam and clothianidin”4. Both pesticides are widely applied in global agro-ecosystems and are accessible to pollinators such as social bees, but are currently subjected to two years of restricted use in the European Union because of concerns over their safety. The basic procedure that followed is that queens were allowed to sexually mature, and the production of worker bee offspring was observed for 4 weeks. Data shows that 25% fewer queens were alive than in the controls, with 38% fewer queens in the experimental trials producing worker bees than in the controls4. There was also 34% less reproductive success in the queen bees that had been exposed to neonicotinoid doses4.

The results show the fragility of queen physiology, anatomy and reproductive success. By being exposed to field-realistic doses of neonicotinoids, the development of social queen bees were severely hindered. Even within 4 weeks’ time, there were very notable effects. One change in anatomy that occurred was ovariole hyperplasia in the neonicotinoid-exposed queen bees. The larger ovary sizes suggests that neonicotinoid has a direct impact on the reproductive systems of queen bees, although it cannot be determined through this study exactly how this may impact reproductive processes. The decrease in stored spermatozoa and spermatozoa quality can be inferred to be a limiting factor to queen longevity, since queen bees that do not properly or successfully develop anatomically and sexually are often replaced in bee colonies. These findings show that even common pesticides can have significant effects on queen anatomy and physiology. As a result, in order to protect Apis mellifera, it is necessary for greater knowledge on lethal and sub lethal pesticide doses, as well as greater evaluation of pesticide safety.

Given the available data, if no actions are taken to protect Apis mellifera colonies, within twenty years, some U.S. states will no longer have any Apis mellifera colonies. Looking at Figure 1, some states have already lost more than half of their honey bee colonies. Humans will lose one of the few pollinators on Earth, endangering more than just our food sources. Plants that need the help of honey bees will have difficulty reproducing, which may lead to decreased species diversity in plants. Fewer plants would mean less energy for consumers ranging from insects to humans. There would be less energy in the ecosystem in general, as primary producers number will significantly decrease, which would eventually lead to decrease in energy levels in the food web. The ecosystem would not be able to function as it did before in homeostasis.

Given the available data, if no actions are taken to protect Apis mellifera colonies, within twenty years, some U.S. states will no longer have any Apis mellifera colonies, which would have a disastrous impact on global ecosystems. To protect Apis mellifera, the U.S. can follow in the steps of the European Union, which has placed a ban on 3 types of neonicotinoids that have proven to have detrimental effects. As summarized in the queen bee study4, neonicotinoids can have a significant impact on bee development, maturity and behaviour, and can affect the success of bee colonies. As a result of concerns on reduced bee diversity and distribution, the E.U., as of December 1st, 2013, has restricted the use of clothianidin, imidacloprid and thiamethoxam in seed coatings. According to the Pesticide Action Network Europe, they have a table listing pesticides that could be replaced by natural predators or other alternatives.

Additionally, the U.S. could also place greater regulation measures on farmers of key food crops, limiting the amount of pesticide and pesticide categories that can be used within specific periods of time. Another potential solution would be for the U.S. to increase knowledge on the subject and educate the farmers on the effects of pesticide use on the environment and its included species. Since the primary motivation behind pesticide use is to increase farming productivity, farmers should be aware that such practices not only endanger bees, but also risk biomagnification, which increases pesticide load concentration down the food chain.

Admittedly, it is hard for the EPA to make new laws. This is because the process for restricting chemical use under the Toxic Substances Control Act (TSCA) can take decades. The companies have around 7 years to stop using the chemical that is harmful and are given another 5 extra years if the company wishes to extend their time. Moreover, the Environmental Protection Agency that “administers TSCA, often works with companies on voluntary phase-out programs — which also take years to complete — as it has with the flame retardants known as polybrominated diphenyl ethers or PBDEs”5. We must be more vocal about making these changes sooner rather than later.

And yet, individual states and lobbyists can certainly take action as well. For instance, California did pass their own state law in order to regulate the use of chemicals, and in June, legislation was sent to President Barack Obama in order to get his signature approving the expanded power of the EPA. Passing new laws and increasing understanding of the impact pesticides are having on bees should be done immediately so that the EPA can better control chemical usage and a provide safer environment for us, and the insects that help pollinate our planet, to live in6.

Moreover, the latest version of the law, recently passed in June (No: 114-182.), grants the EPA greater power to examine the effects of around 2,000 chemicals. The EPA now also has the final say over decisions made by states. It seems that government is making huge progress, until one figures out that the government is not funding the EPA to carry out all the examinations. “The bill doesn’t provide EPA enough money to get through this enormous backlog of old, and in some cases, very dangerous chemicals to assess whether they need to be regulated or even banned,” said Scott Faber, vice president of government affairs at the Environmental Working Group, taking the EPA “decades to get through the thousand most dangerous chemicals that EPA itself has said need urgent review” ((Scialla, (2016, June 22)). It seems like there are still many steps that the government has to take, although hopefully these are measures that will lead to far-reaching solutions.