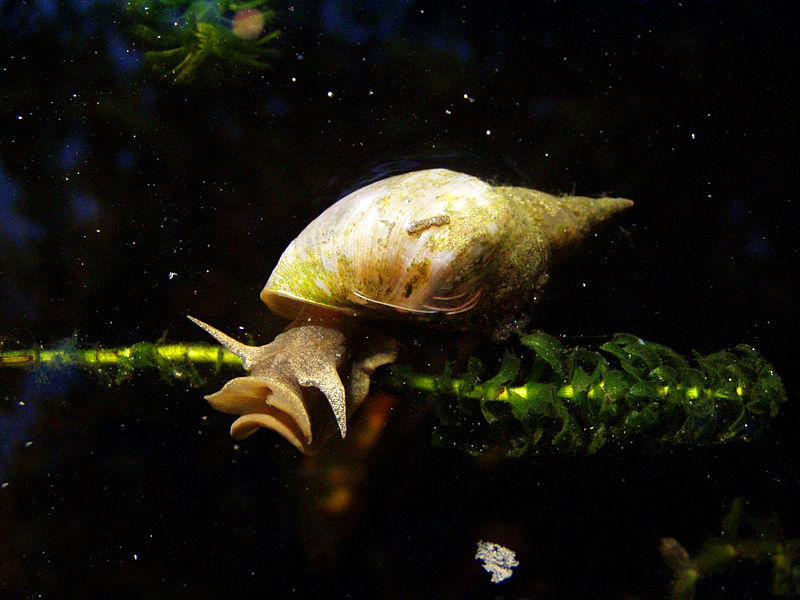 Bisphenol-A (BPA), used in the production of polycarbonates and resins, which are used in many common household items, is a ubiquitous endocrine disruptor, and can be found in the urine of 93% of the U.S. population. Many effects have been found on this chemical, including adipogenesis. However, these studies, mostly done on rodents, have had varied results. Establishing the effects of this chemical is still something that has yet to be done.

Previous animal and human epidemiologic studies have shown that BPA is an endocrine disruptor and is associated with many different negative effects. The purpose of this project was to test the effects of BPA on snails, Lymnaea stagnalis, which have not been used as animal models before, by measuring change in growth rate (mass).

We divided the snails into four groups: one control without BPA, and three study groups with different concentrations of BPA of 0.4

g/L, which is similar to the concentration found in human urine. We monitored the growth of the snails periodically for up to 30 days.

We found the snails in the higher concentrations of BPA grew much faster during the first 30 days. The average starting masses were the same in each group. After 24 days, the growth rate in the control tank was 57% and in the 1.2

g/L tank was 327%. However, during the second month of observation, the mass of snails in BPA began to fall. The growth rate in the control tank over the next 36 days was 80% from the original, in the 1.2

The results of this study indicate that BPA causes an increased growth rate. In addition, there is a linear relationship between BPA concentrations and growth rates.

We see items all the time that say “BPA Free,” but what does that mean? What is BPA and why do manufacturers care about it? We decided to look into it.

BPA is used in the production of polycarbonate plastics, which are used in numerous consumer products including food and containers and the lining of food and beverage metal cans. Small amounts of the BPA can leak out of the material in food and water and 93% of the U.S. population has detectable levels of BPA in their urine1.

BPA has been noted for many negative effects through animal, particularly mouse studies234. These include effects on the endocrine system, the brain, and adipogenesis. Through observational studies done on humans, higher-than-average BPA concentrations in the urine have been linked to obesity, diabetes, and heart disease, among many other diseases and conditions. This is very serious, as BPA is ubiquitous, being found in many items, particularly plastic containers and the lining of metal cans.

There are multiple explanations existing as to why BPA causes fat accumulation. One is that levels of adiponectin, a hormone regulating glucose levels and fatty acid breakdown, are lowered by even small amounts of BPA3. Another is that levels of leptin, an enzyme regulating hunger and metabolism, are increased by BPA5. These results could explain how BPA has an effect on adipogenesis.

Despite all this, animal study results (which constitute a majority of all studies conducted) have had varying results, raising much controversy over the mechanisms of toxicity of BPA6. As mentioned previously, most animal studies have been done with mice, although there are studies that have been done with other species. We are trying to diversify the studies, and at the same time see whether aquatic species such as snails are affected by BPA. Maybe this will give us a better understanding of this chemical, which can be used in terms of its effect on humans. Thus, we used freshwater snails Lymnaea stagnalis as our animal model.

We conducted this study using great pond snails which were ordered from Carolina Biological Supply. The tanks we used were 0.5 gallon plastic tanks (Petco). We used aerators to provide them oxygen. We used twenty-eight snails, which were separated into four groups based on size. We did this by first taking all of the snails and grouping them into seven groups of four. Each group of four had snails of about the same size. Next, we took one snail from each of the seven groups, to form four groups of seven snails-our final groups. This way we have four groups, and for each snail in a particular group, there are snails of corresponding size in the other three groups. Their initial masses were taken prior to placing them in the BPA (Table 1).

Because of BPA’s lipophilic effect, we dissolved it in methanol at a stock solution of 3

g/L. These concentrations were used because they are similar to the average concentrations of BPA found in human urine. Methanol was added to the study group, an amount equal to the amount of stock solution used in the highest level of BPA. Putting methanol in the control group took out the possibility that the methanol would cause any abnormal effect in the BPA groups.

We measured the mass of the snails a total of six times for a total of 30 days with measurements every 7 to 12 days. We used a triple beam balance for measurements. Before weighing them we blot dried them with a sponge. During each measurement, we changed their water and put in more BPA for the study groups and methanol for the control groups.

We observed that the snails in the BPA concentrations grew faster than the control group for the first month (Table 1). What’s more, the higher the concentration, the faster the growth, meaning there was a linear dose-dependency effect, something, which has been mentioned before in previous studies, that has been difficult to achieve6.

After the fifth week, continuing to observe the snails, we observed another surprising result. The masses of the snails in BPA began to fall. The higher the concentration of BPA, the faster their masses fell. In the control group, the snails continued normal growth rates from the previous five weeks for three more weeks, before they too began to lose mass (Figures 1 and 2). The snails in the BPA group died first by concentration, followed by the control group.

g/L), grew 327% in the first 24 days of measurements, where their masses peaked. From there, there masses went down. However, the control group continued to grow at a steady rate. At day 60, when we considered the snails in the BPA to be dead, the control group was still growing.

As we mentioned in the introduction, BPA has been noted for many different negative effects. With the faster mass growth, there are a number of possibilities as to what could have caused it. One hypothesis is that it was caused by adipogenesis. There are multiple explanations existing as to why BPA causes the accumulation of fat. One is that levels of adiponectin, a hormone regulating glucose levels and fatty acid breakdown, are lowered by even small amounts of BPA3. Another is that levels of leptin, an enzyme regulating hunger and metabolism, are increased by BPA5. These explanations could show how BPA has an effect on adipogenesis.

Much attention for root causes of the obesity epidemic problem has been on high caloric food intake and sedentary lifestyle. While lifestyle and dietary factors play a big role, our study provides evidence that environmental factors such as BPA may also play a role. We showed that BPA has an effect on a snails’ growth.

BPA’s rise has been in correlation with obesity’s rise. As manufacturing and production of plastics and other materials increases in our fast-developing world, so has the increase of diseases like obesity. There is no doubt that all this production has its toll. BPA-containing baby bottles have been banned in Canada, Europe, and recently in the U.S., after the FDA initially declared BPA safe in 200811. There is growing evidence showing that at current concentrations, severe negative effects from BPA can take place. There is still not yet enough strong, consistent evidence to prove anything. At this point, we are still far from that. However, we believe that eventually, the negative effects of BPA will be realized, and steps will be taken in the U.S. and countries around the world to restrict its use.

There may have been variables affecting our results. One is that the snails are much smaller than us humans, so the effect on them is much more dramatic, although we used a low concentration. Also, snails are more distant from humans than mice, which were commonly used in other studies. The way snails react to BPA may not be the way humans react. Despite these variables, we still have an accurate experiment with accurate results based on our methods.

We conclude that BPA has an effect on the growth of Lymnaea stagnalis. Also, there is a linear dose-dependency of BPA effect, where the higher the concentration, the more severe the effects. Our conclusions are in concurrence with those of Rubin et al., 20017 and Masuno et al., 200511, among others812.