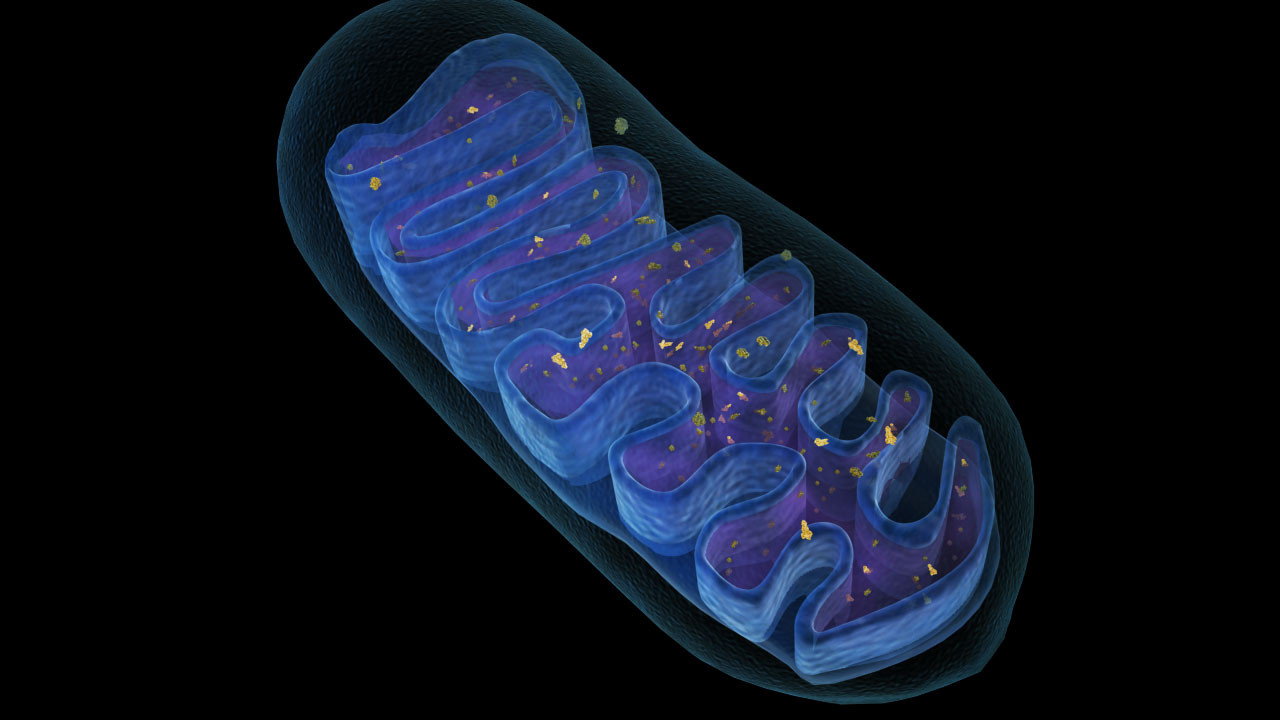 The mitochondria are a membrane-bound organelle essential in cellular respiration. Meaningful advancements in the understanding of the structure and functionality of the mitochondrion have been completed only in the last century. However, retrospection and analysis of relevant discoveries can lead to future breakthroughs in the comprehension of the role of the “cellular powerhouse.”

Eukaryotic cells necessitate cellular energy in order to facilitate life functions. Energy in eukaryotic cells is created by the process of cellular respiration; a metabolic operation consisting of aerobic pathways for complex catabolism of carbohydrates and sugars, and ending with the synthesis of cellular energy in the form of ATP (adenosine triphosphate) via oxidation reactions. The mitochondrion is the “cellular powerhouse” in that it houses and expedites the synthesis of ATP from ADP1. The structural anatomy of this intracellular organelle is quite elaborate. Mitochondria are enclosed by two membranes, (inner and outer membranes) but are not considered part of the endomembrane system1. Likewise, mitochondria have a separate genome, which is inherited from the mother. MtDNA (mitochondrial deoxyribonucleic acid) consists of 13 protein-encoding zones, along with 22 tRNA-encoding genes. The supposed theory that mitochondria originated as bacterial cells was updated by the serial endosymbiotic theory in the 1960’s by Margulis. In terms of size, mitochondria are approximately 1-10µm long and within their internal membranes contain mitochondrial matrix. The matrix is composed of enzymes and semi-autonomous genetic information and protein-creating ribosomes. Surface area within the organelle is increased via the cristae1. Over the last century and a quarter, enormous developments in the recognition of structure and functionality of the mitochondrion were made. The progress has not stopped. Currently, mitochondrial biology is centered around the identification of certain genetic mutations that can be the cause of disease through out the entire organism.

Developments in the discovery of the mitochondrion began in the 1890’s with observation of small bacteria-like granules in hepatic cells. In 1890, German pathologist, Richard Altmann observed these granules and began speculation as to what they were and how they played a role in the cell. Altmann coined the term “nucleic acid” however; he referred to mitochondria as “bioblasts.” Subsequently, Carl Benda used a crystal violet stain to observe the granules (mitochondria) and confirm Altmann’s theory. Benda referred to the granules as “mitochondria.” Towards the beginning of the 20th century, a specific stain, Janus Green B was introduced by the German biologist, Leonor Michaelis. Mitochondrial staining using the Janus Green B functioned by the reduction of the dye via the reducing agents: mitochondrial enzymes. This reaction however was not fully appreciated until the mid 1900’s2.

During the 1940s and ‘50s, new biomedical technology such as the electron microscope was introduced to cellular and molecular biology labs, enabling more accurate observational data to be complied. Biotechnology allowed for fractionating sub-cellular components for more in-depth research. At first however, the scientific community rejected many studies involving the qualitative and quantitative observations of mitochondrial physiology on an isolation-from-system basis. The Bensley and Hoerr 1932 hypothesis was quickly disregarded by cytologists because the rodent hepatic cells used in the study failed to stain with the mitochondrial-specific Janus Green B.3. The theory was eventually considered a pioneering work in the study of organelles isolated from the entire cellular system. Based on these findings, Albert Claude and other contemporary cytologists (Schneider, Hogeboom, Kennedy) managed to isolate cellular components, including mitochondria, via differential centrifugation of cell homogenates4. Subsequently, enzymatic activity of succinate oxidase and cytochrome oxidase (from Keilin and Warburg) were identified – an early progress in the theories of enzyme-driven catabolism involved in cellular respiration. Lehninger demonstrated that enzymes responsible for the citric acid cycle (later known as Krebs cycle) and oxidation of fatty acids were generalized in the mitochondria.  Lehninger also added that Nicotinamide adenine dinucleotide (NADH) was added externally during the energy-synthetizing process.

Toward the mid 1960’s, Racker debunked the true role of granules found in the inner membrane of the mitochondrion, a problem proposed by the negative staining techniques of Fernandez and Moran in 1962. Racker explained that the particles were identical to the structures of ATPase (identified in isolation). This enzyme has been shown to be a part of the ATP synthase complex, which is involved in oxidative phosphorylation5. Further studies, such as those of Mitchell in the late 1960’s, aimed at the identification of the submicroscopic structures of the mitochondrion and the role of the electron transfer chain (which has been proven to contain enzymes and proteins essential for oxidation reactions).

STRUCTURE OF MITOCHONDRIA VIA ELECTRON MICROSCOPY

In 1953, George Emil Palade, a Romanian-American cytologist published a study elucidating his electron microscopy results. Palade sectioned pancreatic tissue and observed via an electron micrograph (Figure 1) the inner and outer membrane of the mitochondrion as well as the internal convolutions, which he called, “cristae mitochondria.” These cristae were observed to be dotted with proteins including enzymes such as ATP synthase and cytochrome c oxidase, which have an integral role in electron transport chain). Palade’s findings mark the beginning of the “modern” era in mitochondrial biology in that the biochemical as well as physical structure of the organelle was understood.

The early 1950’s saw the realization of the mitochondrion as the “energy-powerhouse” of the cell. Despite the confirmed theory that the organelle was involved in respiration, research continued in figuring out answers to the question, “how does the mitochondrion generate energy?” Aforementioned cytologists such as Lehninger and Keilin facilitated discussions on the role of enzymatic catalysts in the process of phosphorylation and production of ATP. Britton Chance used spectrophotometric techniques to identify individual components of the transport chain2. After the introduction of electron spin resonance, Beinert observed that ionic particles aid in the transfer chain. Coenzymes as well as protein complexes were found to oxidize NADH and reduce oxygen within the matrix of the mitochondria as quoted by Hatefi6. Hatefi elaborates on the transport chain and oxidative phosphorylation in his 1985 publication, “The Mitochondrial Electron Transport and Oxidative Phosphorylation System.”

In order to truly understand the phenomenon of the phosphorylation from adenosine diphosphate (ADP) to adenosine triphosphate (ATP), the inner membrane must be viewed as an intact system. Pullman in 1960’s discovered a catalytic component of the enzyme ATP synthase in bovine myocardial mitochondria. Mitchell, during the same time, devised the chemiosmotic hypothesis, in which hydrogen ions (H+) are transferred across the inner membrane. Mitchell explained that this active transport provides energy for the coenzymes and ATP synthase to synthesize energy. Chemiosmosis is now a commonly cited theory.7 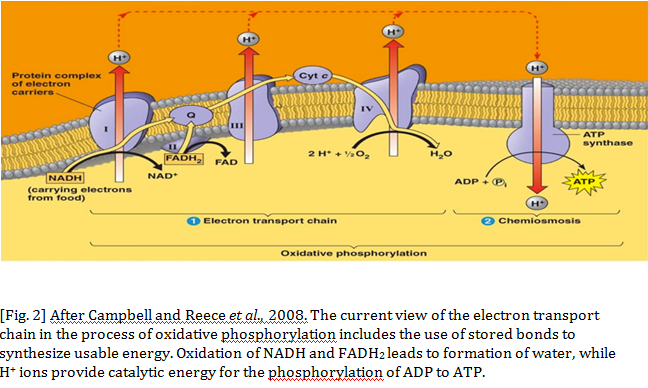 In the 1960’s, Lynn Margulis unified both Portier and Mereschovsky’s ideologies in one endosymbiotic theory of the development of eukaryotic mitochondria. Margulis concluded that due to mitochondria’s separate genetic information and autonomous ribosomes, mitochondria were bacterial cells in the early eukaryotes. Over time, the bacterial cells evolved into the energy factories we know today as mitochondria. The scientific community at first readily disagreed with this finding, however today; the endosymbiotic theory is commonly accepted because of subsequent microscopic and comparative molecular experimentation which supported the evolutionary ideology.

THE MITOCHONDRIAL GENOME AND MUTATIONS

Though incipient mutational genetic studies in mitochondria were completed as early as the 1970’s with cytologists and molecular biologists like Nass and Wintersberger, more comprehensive genetic experiments were carried out from the 1980’s to the present. MtRNA or mitochondrial RNA synthesis was observed and described by Linnane, while Tzagoloff made significant contributions to the discovery of polypeptides and nucleotides within the mitochondrial genetic structure. Anderson completed a bovine gene sequencing and analysis in 19812.

The genetic focus began to shift towards mutation around the turn of the century. Westermann completed nonessential gene isolation most effectively in 2002. Isolation of deletions in yeast mitochondrial genes yielded a significant find of truly essential genes involved in respiration. “A total of 341 open reading frames were identified to be essential for cellular respiration in that they encode proteins responsible for the replication, transcription and translation.”8.

Genetic studies are continuing in the field of mitochondrial biology. However, the standard has now shifted to mitochondrial relationships with other intracellular organelles such as the endoplasmic reticulum9.

Current studies in mitochondrial biology revolve mostly around identifying pathogenic mutations in the organelle (such as mutations in tRNAsLeu URR codon,  genetic translocations in encephalopathy, etc.) that can lead to health concerns on the scale of the entire body.

Contemporaneous research efforts aim to elucidate the enigma of maternally transmitted tRNA mutations10. Levinger in 2012 identified that diseases such as muscular myopathies as well as deafness can be attributed in part to t-loop mutations (mutations in the enzymatic origins of telomerase which are considered congenital) and poor enzyme-substrate binding with tRNA binding zones.

With new technological advancements in the field of cellular biology and biotechnology, we are able to quickly progress research efforts in the domain of mitochondrial studies. Currently, research efforts are concentrated in the identification of the role of mitochondrial genes, enzymes, and substrates in many diseases. In the future, the scientific community will be able to revolutionize biology textbooks and biochemistry laboratories alike by analyzing historical breakthroughs and applying newly discovered knowledge and techniques to contemporary issues.