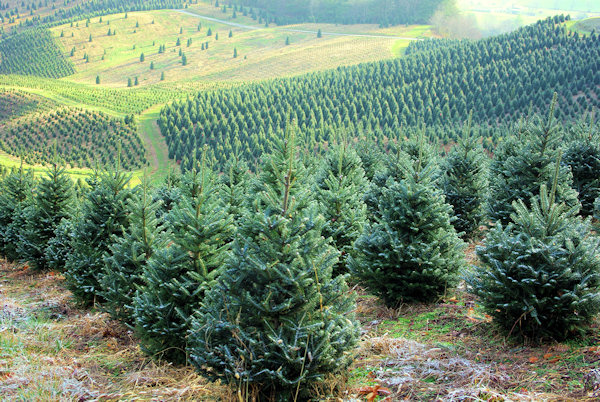 Household air samples were taken from families in the Washington Township, New Jersey area both before and during the winter holiday season.  Data shows that there is a substantial (100%) increase in the number of mold spores in the air when a family introduces a live Christmas tree into the home.  Families that use artificial Christmas trees also experienced an increase in mold, and those that did not use any type of tree during the winter holiday season did not see an appreciable increase in airborne mold.  42% of participants with underlying respiratory disorders (such as allergies) experienced an increase in their symptoms when there was a live tree, versus 13% if an artificial tree was used.  These results indicate live Christmas trees carry mold which causes a seasonal flare-up of allergy symptoms in susceptible individuals.

The worsening of respiratory symptoms in patients during the Christmas holiday season has been noted in the literature since at least 1930, when the primary suspect for this phenomenon was proposed to be the live Christmas tree itself1.  In 1970, Wyse and Malloch took bark scrapings from 10 live conifers and determined that the primary molds carried by the trees were Penicillium spinulosum, Epiconccum nigrum, and Alternaria tenuis2.  Kurlandsky et al. definitively proved that these conifer-associated molds were of the species that are responsible for symptoms in those patients with underlying respiratory disorder3.  The timing of the mold production was shown by Watson, Rockwell, and Santilli, and indicated that one live coniferous tree in an apartment could be a significant source of airborne mold spores, with peak production of airborne mold occurring between one and two weeks after the tree was installed indoors4.

Here, a novel large-scale study was undertaken to determine the average percent increase in household mold during the winter holiday season in three groups – those with live trees, those with artificial trees, and those without trees – and to determine which type of holiday decorating was associated with an increase in the symptoms of those people with diagnosed respiratory disorders.  This work was conducted by high school students at West Morris Central High School and involved participation of 90 families in the Washington Township, New Jersey area.  This work was funded by a 2014 BASF Science Education Grant.

Ninety families were asked to voluntarily participate in this double-blind study.  In November, 2014 all volunteers were provided with a Cornmeal Yeast Agar (CYA) plate and instructed to place the plate in the home where the main winter holiday decorations (such as a tree) would be placed the following month.  The agar was exposed to the household air for 24 hours, held at 4 degrees Celsius (39.2°F) until returned to the laboratory, and then incubated at 22 degrees Celsius (71.6°F) for approximately one week.  Number of mold spores was determined by visual identification.  No attempt was made to distinguish among different mold species.  After holiday decorations were set up in the house, volunteers were instructed to wait one week (to allow germination of possible mold spores), then repeat the procedure with a second CYA plate.  Volunteers responded to a questionnaire regarding the type of their holiday decorations (live tree, artificial tree or no tree).  They also enumerated the number of people in the household that have been previously diagnosed with respiratory disorders, and the number of those people who experienced an increase in their respiratory symptoms when either the first plate or the second plate was in their home.

Figure 1 shows a typical CYA plate after both exposure to household air and incubation to allow for microbial growth.  Molds were visually distinguished from bacteria by colony morphology. 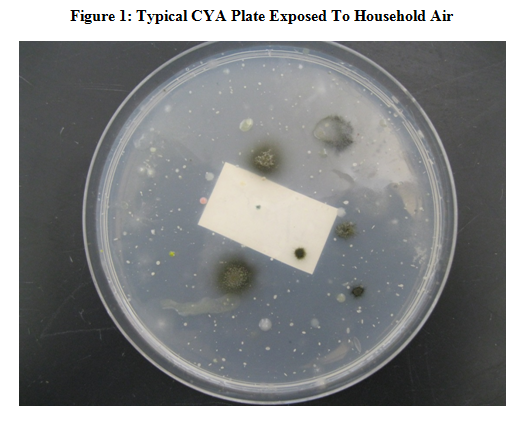 Both Table 1 and Figure 2 describe the mean number of molds found on the plates both before holiday decorations (Plate 1) and after holiday decorations (Plate 2).  In comparison to the baseline (before decorations) the amount of mold doubles after a live tree is installed in the house.  A chi-square test was performed, finding this level significantly higher than baseline, X2 (1, N = 39) = 11.00, p < 0.05).  Households with artificial trees also experienced an increase in the number of airborne mold. 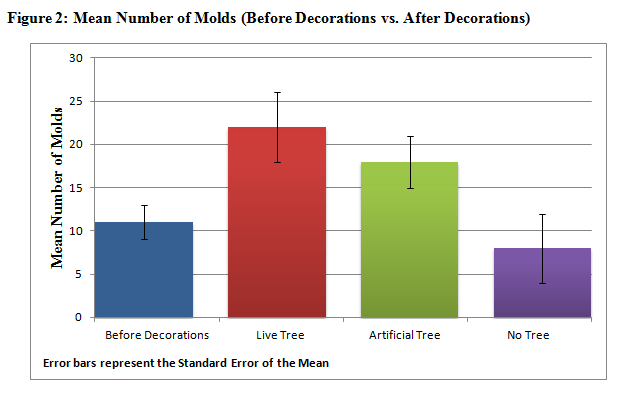 Table 2 and Figure 3 display the data surrounding the participants with respiratory disorders and their symptoms. Overall, as mold counts rose above baseline, so did the percentage of people experiencing symptoms. The most dramatic increase in symptoms was in the live Christmas tree group.  8% of participants that had underlying respiratory disorders and that used live Christmas trees experienced problematic symptoms before setting up decorations.  However, one week after setting up decorations, this number quintupled to 42%. 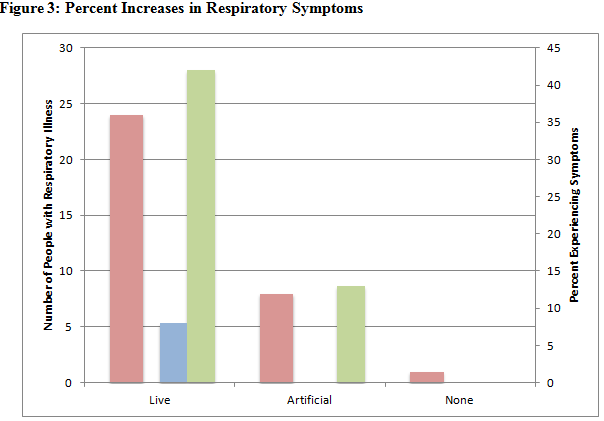 This experiment supports the observation that people with respiratory disorders experience an increase in their symptoms during the holiday season, and that the increase is directly correlated with introducing a live Christmas tree (and the mold it carries) into the home.  This group suggests that while mold spores are generally dormant in the winter, bringing a live tree indoors creates a false spring.  Molds germinate, and within one week they are producing airborne spores that aggravate the symptoms of respiratory disorders.  Using an artificial tree is shown here as a better alternative to a live tree to reduce symptoms, but mold (possibly from storage of the tree) can still aggravate symptoms.   Further studies should explore options to decrease the number of tree mold to levels that do not aggravate respiratory symptoms.