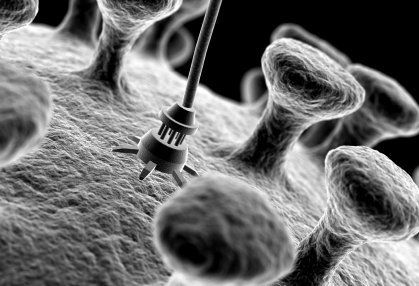 Many of you may be familiar with the standard chemotherapy and radiation therapy treatments used for cancer treatment. However, much of the research over the past decade has pointed to the arrival of a new approach to cancer treatment—the use of nanotechnology.

Nanotechnology is a new branch of science that engineers on the atomic and molecular level to create particles and structures with novel physical and chemical properties1. Although we often hear of nanotechnology being incorporated into systems like computers or even microscopes, this new technology may be our “magic bullet” for the world’s longstanding cancer struggle. The new technology has much potential use in the diagnosis and treatment of cancer.

Currently, nanotechnology in the field of cancer is working towards the development of nanoparticles or vectors that target cancerous cells with drugs and imaging agents, and nanosensors that can detect biological signs of cancer1.

Nanosensors are particles engineered to target specific molecules and biological matter in order to detect and analyze matter on the nano-scale. For example, nanocrystals can be used to label certain cells and tissues by emitting light of a certain wavelength2. Recently in 2010, Yale scientists have developed the first nanosensor that can detect cancer in “whole blood” (in the actual human) without having to extract and purify blood from a patient. The sensor can be used to detect breast cancer and prostate cancer in the bloodstream, in quantities as low as several nanograms3. In the same year, a research team from the Israel Institute of Technology used nanosensors made of gold nanoparticles to differentiate between healthy patients and patients with lung, breast, prostate, or colorectal cancers through the analysis of a single exhaled breath4. Thus, these promising new sensors may be utilized as detectors for various types of cancers in their early stages and in multiple body fluids—possibly improving the chances of full recovery through early diagnosis.

In addition to nanosensors, nanovectors, otherwise known as “nanoparticles,” are being developed as delivery agents for both anti-cancer drugs and imaging agents. The reason? Scientists are constantly struggling to find effective means of delivering anti-cancer treatment (e.g. radiation or drugs) directly to specific tumor sites—slight miscalculations and imprecision in the administration of these agents can easily affect the healthy neighboring tissues. Standard treatments like ionizing radiation and sometimes even chemotherapy may affect normal tissues in addition to cancerous tumors. Nanotechnology has the potential of overcoming these prior difficulties by crafting “nanoparticles” that have properties that allow them specifically target cancer cells once absorbed into the body1.

Most cancer-targeted nanoparticles are referred to as “Nanocarriers.” While standard chemotherapy delivers anticancer agents or drugs through injection and pill, the development of nanocarriers may render standard chemotherapy moot5. Nanocarriers are nanoparticles that can carry and deliver anticancer drugs with high-specificity to cancer cells. Advantages over free drugs are numerous; if built well, nanocarriers can protect drugs from degrading, protect drugs from interacting with non-cancerous environments, enhance absorption of drugs into tumors, and target specific cancer pathways within the body. Currently, typical nanocarriers are built from natural and synthetic polymers and lipid molecules. However, other nanocarriers include nanoshells built from gold and silica, gold nanoparticles, nanocages, and other materials6.

Despite its promising future, most nanoparticles and sensors are still in development phase. Various cancers and even tumors are extremely heterogeneous in composition; thus, each nanocarrier often has to be tailored specifically to the pharmacokinetics (bodily pathways) of a specific individual and specific tumors. As a result, one type of nanocarrier may not be universally potent for a wide patient population as its effectiveness varies from individual to individual. As a result, in-vivo (live) studies on actual patients are difficult because nanocarriers must be experimentally determined on a case-by-case basis6. As with most new and promising innovations in the medical field, widespread application may require a few more decades of further research and development. Nevertheless, although we are still far from a panacea, this coming decade holds much promise for the future of cancer nanotechnology.