Alzheimer’s Disease (AD), the most common cause of dementia, is a neurodegenerative condition characterized by neurosynaptic loss. Induced pluripotent stem cells (iPSCs) have the potential to become neurons and can be used to model AD and its molecular mechanisms. Organoids, tissue constructs derived from stem cells, can be used in the laboratory to mimic the human brain for exploratory studies. Lastly, stem cells have the potential to treat neurodegenerative diseases like AD by repairing and/or replacing diseased neurons. This review summarizes recent developments in Alzheimer’s related-stem cell research and considers the challenges associated with using stem cell technology in neurodegenerative disease models.

Approximately 5.8 million older adults in America live with Alzheimer’s disease, a figure that is estimated to increase to nearly 14 million by 2050 [1]. Alzheimer’s Disease (AD) is the most common cause of dementia, making up 60-80% of all dementia cases (Figure 1) [1]. AD is characterized by the accumulation of beta-amyloid peptide in the brain, which leads to the formation of beta-amyloid plaques [1, 2]. Buildup of tau protein in the neurons also causes neurofibrillary tangles to form [1, 2]. Beta-amyloid plaques and tau neurofibrillary tangles are toxic to neurons and promote brain cell necrosis, or death, especially in parts of the brain important for memory like the hippocampus [1, 2]. For this reason, adults with Alzheimer’s have more decline in their learning and memory than other cognitive domains like language and executive function. 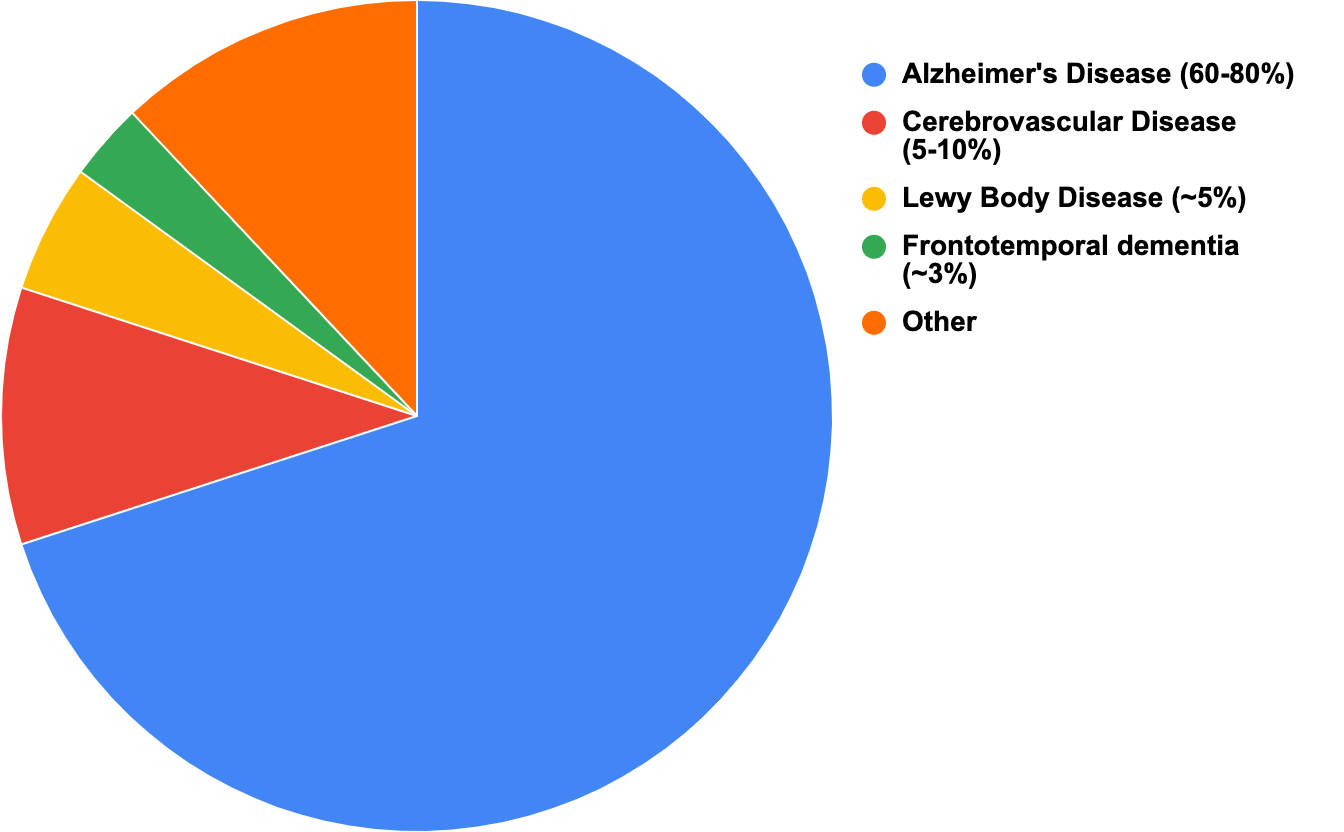 Figure 1: Most common causes of dementia among US adults aged 65 or older

Stem cells are undifferentiated cells that lack a specific function or structure; they have the potential to become other kinds of cells in the body. Stem cells can replace worn out cells when they die and can even be used to create new tissues to replace damaged organs. Some stem cells are naturally occurring in the body, while others can be manufactured in the lab. For example, induced pluripotent stem cells (iPSCs) are made in a lab by combining regular cells with transcription factors. iPSCs can differentiate into many different cell types like neurons, liver cells, and even muscle cells. iPSCs are helpful for disease modeling due to their ability to generate cell types affected by disease.

iPSCs may be an attractive option for overcoming barriers in researching Alzheimer’s. The early, inherited form of AD is associated with mutations in the amyloid protein precursor (APP), presenilin-1 (PSEN1), and presenilin-2 (PSEN2) genes [2]. Mutations in these genes are a known cause of familial, early-onset AD and lead to overproduction of beta-amyloid, which is characteristic of AD [2]. Stem cells can thus be used to model familial variants of Alzheimer’s. Unfortunately, the majority of AD cases are “sporadic” or late-onset and not inherited. Sporadic AD has more diverse pathology. Although mutations in genes like apolipoprotein-E4 (ApoE4) gene greatly increase one’s risk of developing Alzheimer’s, no single gene causes sporadic AD [2, 3]. Many factors contribute to the accumulation of beta-amyloid protein plaques, buildup of tau neurofibrillary tangles, and the presence of activated microglia—or central nervous system (CNS) macrophages—all of which produce neuroinflammation in the brain leading to cell death [3].

Because AD is caused by numerous factors, stem cell therapy may be better than traditional medications that are currently being studied for treatment of AD. Stem cells can target neuron loss instead of focusing on buildup of just amyloid or just tau protein [4]. With stem cell differentiation, one could possibly generate specialized neurons in brain areas most affected by Alzheimer’s like the neocortex and hippocampus [4].

The Role of Stem Cells in Understanding Alzheimer’s

Organoids are three-dimensional in vitro tissue constructs grown from stem cells that researchers can use to model organs. Cerebral organoids consist of neurons and glia much like our brains, and thus allow us to visualize and better understand the cellular and structural complexity of the human brain [5]. One could argue that cerebral organoids should be used in AD research.

There are some limitations to using organoids to model AD. Compared to the human brain, organoids lack oxygen and other necessary nutrients making them prone to cell death and necrosis. Some of these limitations have been addressed with recent advances in technology. The development of 3D-printed bioreactors to support organoid cells, in particular, offers a solution for continued organoid research [4, 5]. 3D bioprinting can be used to model vascularization of the tissue, thereby preventing cell death.

As mentioned earlier, iPSCs may be useful in modeling AD. They first came to public knowledge in 2007. Shinya Yamanaka et al. showed that one could turn already differentiated living cells into pluripotent cells with the ability to become several different cell types upon addition of a few transcription factors [6]. For example, if you take a muscle cell and expose it to the Yamanaka factors, that muscle cell can become an iPSC (Figure 2). This iPSC is now capable of becoming a neuron, heart cell, pancreatic cell, etc. iPSCs are important because their pluripotent potential can be used to research the development of various diseases. However, some limitations associated with iPSCs include their structure, which is less organized than other stem cell types and their ability to divide uncontrollably. 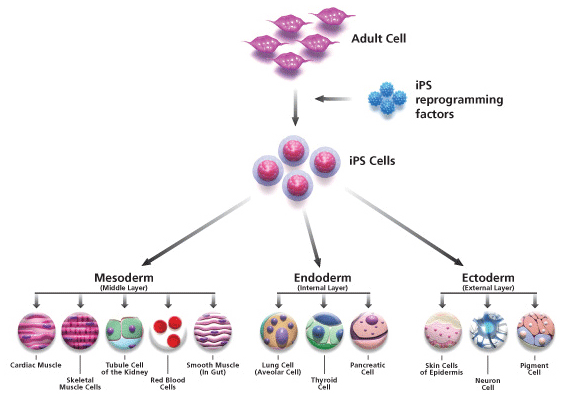 In the case of AD, iPSCs can be used to form neurons that encode for AD, either sporadic or familial AD depending on the genes chosen [7]. You may recall from the introduction that familial AD is associated with the following mutations: presenilin 1 (PS1), presenilin 2 (PS2), and amyloid precursor protein (APP) mutation. Some researchers have already begun looking at how to utilize iPSCs in their Alzheimer’s research.

In 2011, Yagi et al. generated iPSCs from skin and connective tissue cells in AD patients with PS1 and PS2 mutations [8]. These iPSCs were then converted into neurons that had increased levels of beta-amyloid secretion just like the regular neurons of AD patients [8]. Yagi et al’s study demonstrated that iPSC-derived neurons from AD patients model behaved similar to regular AD neurons [8]. We can use these iPSC-derived neurons from AD patients to conduct further studies about the disease and to test certain therapies [8, 9].

The Role of Stem Cells in Treating Alzheimer’s

Stem cells may also have the potential to treat Alzheimer’s. Stem cell treatments are already being used to treat certain cancers and blood disorders. Two types of stem cell treatnent are endogenous and exogenous therapy. Endogenous therapy is the creation of new cells to replace diseased or dead cells. Neural stem cells can be activated to create new neurons in the diseased brain, thereby counteracting neuron loss [7, 10]. In AD, the hippocampus is one of the first brain areas to suffer from damage, hence why adults with AD experience memory loss [1, 11]. New neurons in the hippocampus already decline with normal aging [11]. Stem cells can thus be used to create new neurons in the hippocampus once stimulated with the following factors: brain-derived neurotrophic, insulin, nerve, and vascular endothelial growth factors [3, 11, 12]. There are challenges with the endogenous approach. For one, simply replacing dead neurons with new neurons does not improve memory. We know this because the adult brain produces a smaller number of new neurons at baseline, but memory still declines with age. Also, the number of neurons lost by the time patients with AD are diagnosed is so great that it is difficult to create enough neurons to compensate.

Another approach to stem cell treatment is exogenous therapy. Exogenous therapy refers to stem cells repairing or changing diseased cells [3]. In 2009, Moghadam et al. used neural precursor cells (NPCs) to treat AD in rats, and found that after transplantation, there was a significant improvement in rodents’ memory [13]. Tang et al. showed similar improvements in memory after transplanting NPCs directly into the hippocampus of AD models [7, 14]. In a mouse model by Blurton-Jones et al., the improvement in cognition following transplantation of NSCs was thought to be mediated by brain derived neurotrophic factor [7, 15]. Recent animal studies suggest that exogenous repair may one day be a viable option for treatment of memory deficits in AD.

There is no effective treatment to prevent or slow the progression of Alzheimer’s. Stem cell strategies like exogenous neuron repair and endogenous neuro-replacement have the potential to advance our understanding of AD pathogenesis and treatment. Further research with iPSCs in particular is needed to increase our understanding of AD mechanisms and to identify possible targets for future drug therapy.

I would like to thank my mentor, Dr. Deborah Oyeyemi, for all the guidance she has given me during the development of this research review paper. I would also like to give recognition to the authors of the numerous papers I read for providing a better understanding of stem cell research in neurodegenerative diseases. 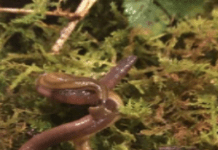