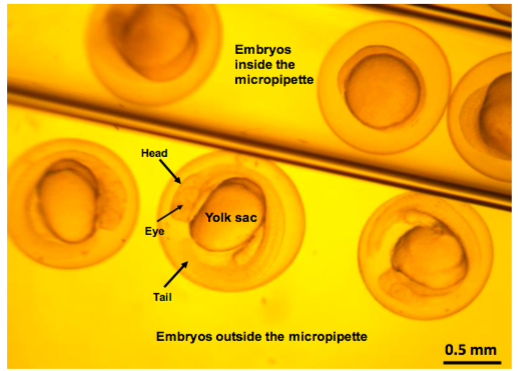 Embryos undergo special morphogenesis, forming stereotyped embryonic structures, such as morula, blastula, gastrula, etc., across all different vertebrate species, an indication of a conserved mechanism for embryogenesis. Generation, maintenance and dynamics of these embryonic structures involve coordinated mechanical forces. However, due to lack of available methods, little is known about how these forces are generated and what roles they play during embryonic development and morphogenesis. Here we described a micropipette culture system, in which live embryos were loaded into a micropipette to study the effects of the micropipette- generated constraining forces on the embryo development during in vitro culture. It is interesting to find that the constraining forces disrupted the normal embryo development while the unperturbed control embryos were not affected. It is noted that the embryos under constraining forces failed to maintain the rhythmic rotational movements and subsequent hatching out from the zona pellucida. Therefore, early embryos are sensitive to the disruption of the mechanical forces, which can cause detrimental effects on normal embryo development.

Fertilized eggs undergo fast stereotypic mitotic divisions (called egg cleavage), forming 2-cell, 4-cell, morulae, blastocyst, etc., which eventually develop into a fully grown individual [1,2].Embryonic development is a very dynamic process, involving many mechanical forces working in a coordinated fashion to generate and maintain a certain morphology. In the case of zebrafish, the fast dividing and growing embryo undergoes dramatic morphological changes from a blastula embryo to an elongated larva with visible eyes, heart, and other organs. Apparently, every morphological change involves mechanical forces [3,4]. There have been reports showing that simply by changing the tensions of the physical surface where cells grow can change the cell fates, forming cells and tissues with distinct functions [5,6]. It is important to understand how mechanical forces contribute to the above described processes of embryonic development, what consequences it may have if these forces are disrupted. It is known that human embryos are vulnerable and prone to abnormalities during various stages of development, leading to arrest of development, miscarriages, or birth defects in new born children [7]. There are many factors, such as genetics, infected diseases, environmental factors, etc., which may contribute to the formation of defective embryos. However, little is known about how the mechanical forces control and regulate embryo development.

1. Fabrication of micropipettes for embryo culture

Glass pipettes were purchased from Fisher Scientific. To make micropipettes, a glass Pasteur pipette was pulled using two hands over a flame of a gas burner, making it thinner. Rotate the pipette on the flame until the middle of the pipette starts to melt and then pull in opposite directions, making the middle of the pipette thin enough to be able to hold the zebrafish embryo (with an inner diameter about 1-1.2 mm). The reason for choosing this diameter to make micropipette is that the diameter of the zebrafish fertilized eggs is around 0.7 mm [1], so the micropipette allows single embryos to be loaded one by one into the micropipette without crowding together.

Use a grind wheel to cut the micropipette (by scrolling around the pipette) at the right diameter with a length about 30 mm, so multiple embryos can be loaded in a single micropipette. The prepared micropipettes used for the experiments are as shown in Figure 1.

The fertilized eggs were purchased from Carolina Biological Supply Company. The eggs were shipped by overnight express in a temperature-controlled package handled by the company. After receiving the package, the eggs were washed with fresh prepared E3 zebrafish embryo culture medium, which is routinely used for zebrafish embryos handling and culture, with a simple composition of 34.8 g NaCl, 1.6 g KCl, 5.8 g CaCl2·2H2O, 9.78 g MgCl2·6H2O as described in Cold Spring Harbor Protocols [8]. Only embryos with normal morphology (smooth zona pellucida, regular round shape) were selected and used for experiments.

4. Culture and observation of embryo development

To observe and monitor the embryo development, an AmScope stereo microscope with digital imaging capabilities (7X-45X Trinocular Stereo Zoom Embryonic Microscope with a 14MP USB3.0 Camera (all AmScope products) was used to record movies, with a 2-minute interval. The temperature was maintained at 30°C during the process of movie recording. All the recorded movies were analyzed and compared between mechanical force-perturbed and non- perturbed control embryos.

1. Normal embryo development to larval stage in the in vitro culture system

First, to make sure whether our in vitro culture system can support normal embryo development and be used to evaluate the effects of perturbation of mechanical force on embryo development, the received fertilized eggs were first cultured in the 60 mm petri dish containing E3 medium without any perturbation. Ninety percent of the fertilized eggs (n=34) developed to stage (Figure 3A) and 70% of them successfully hatched out from zona pellucida (Figure 3B-E).

2. Effect of physical constraining forces on the embryo development

A total of 11 embryos were loaded into the straight-shaped micropipettes and 21 embryos were positioned outside the pipettes and cultured in the same petri dish under the same culture conditions as a control (In order to minimize the experimental errors between different experiments and to obtain an accurate comparison between the loaded and the control embryos). It was found that the embryos that were experiencing constraining forces from the micropipettes slowed down and eventually stopped development after 10 hours culture, while all the nonperturbed control embryos developed to the larval stage with clear head-tail formation (Figure 4). Consistently, all the embryos (n=9) cultured in the L-shaped micropipettes (also in the same petri dish) stopped development. Despite of culture time to 16 hours, the embryos inside the micropipettes could not be as developed as the control embryos (Figure 5), suggesting that the embryo development was completely suppressed, not justdelayed.

The experiments demonstrated unambiguously that both even or uneven lateral forces coming from the micropipette walls all suppressed the embryo development.

3. Disruption of the rhythmic embryo rotational movements by the constraining forces

To test the effect of the constraining forces on later stage embryos, the received early stage embryos were first cultured in E3 medium for overnight, with all embryos showing vigorous rotational movements. The rotational movements had a special pattern, with tail periodically beating which pushed the embryo moving forward, cycling inside the zona pellucida as indicated in Figure 6 (and supplemental data, video 3, 4).

Note the comparison of the average numbers of embryo rotations between the embryos inside and outside the micropipette during the 10.5-hour culture.

This is the first time micropipettes were used to study the effects of mechanical forces on embryo development and the preliminary results are exciting and encouraging. The results show that the developing zebrafish embryos are very sensitive to the perturbation of the mechanical forces. Even gentle pressure or squeezing by laterally constraining of the embryos can produce profound effects, slowing down and eventually suppressing the embryonic development. The observed disruption of embryo development can not be contributed to the embryo contacting or touching the glass micropipette which may be toxic to the embryos, because some of the control embryos outside the micropipettes were also in direct contact (on one side) to the glass micropipette and they all developed well to hatching stage. Therefore, just the contact with the micropipette without any constraining forces does not disrupt the normal embryo development.

Further experiments are needed to determine the effects of the lateral constraining forces at different temporal scales, and whether release of the constraining forces by removing the embryos out of the micropipette can rescue the temporarily suppressed embryo development.

It is interesting to notice the special patterns of rhythmic, long lasting rotational movements of zebrafish embryos during development inside the zona pellucida. It seems that the rotational movements originate from the tail beating which pushes the embryo moving forward with the head leading. Because the developing embryo is confined inside the zona pellucida, the tail beating-driven forward movements are manifested as circling movements, e.g. rotations. It is not known why the tail exhibits the periodic beating movements at such stage of embryo development. It seems that the muscle cells in the tail are self-exiting cells and contracting rhythmically just like heart muscles. This pattern of tail movements may play important roles for fish swimming after hatching out. But why this type of movements starts so early at stage when the embryo is still developing inside the zona pellucida? A most likely explanation is that the rhythmic tail movements may be beneficial for the wellbeing and healthy development for the embryos. This possibility is validated by our experiments since of the rhythmic tail movements by constraining the embryo in the narrow micropipette stopped the further development of embryo and failure to hatch out of the zona pellucida. It would be interesting to test in our future experiments whether release of the constrained embryos from the micropipettes would rescue the rhythmic rotations of the embryos and hatching out of the zona pellucida.

In experiments, we will consider designing methods to measure and determine how much forces are required to disrupt the normal embryo development. Though it is still technically challenging, recent reports have shown it is possible to measure the forces in the living tissues and embryos [9-11].