Ashwin Inala
NCSSM Online
North Carolina School of Science and Mathematics
Durham, North Carolina
February 25, 2017
Abstract:
Density functional theory is a computational technique of using elec-
tron density, not wavefunction, to predict properties of molecular systems. Over the
years, many scientists, such as Pierre Hohenberg, Erwin Schrodinger, and Walter
Kohn, have contributed to the fast growth of density functional theory. To find the
energy of system, scientists must approximate the exchange-correlation functional.
The various types of functionals that scientists use to predict the exchange-correlation
functional fall under three main categories: local density approximations, gradient-
corrected functionals, and hybrid functionals. From the review, it was found that
the PBE gradient-corrected functional and the PBE0 hybrid functional provide ac-
curate approximations for a variety of properties of a system. Overall, local density
approximations should not be the functional of choice to approximate the exchange-
correlation functional.
Key words:
Density Functional Theory, Local Density Approximations, Gradient-
Corrected Functionals, Hybrid Functionals, Electron Density

The density functional theory is now used by scientists around the world to determine the characteristics and properties of various molecules and atoms based on the electron density of the molecule. Some of these properties include the electronic structure of orbitals, atomic reactivity, and even the UV-Vis spectra. Unlike the wavefunction, electron density can be measured. Density functional theory has turned into the most popular way of computationally finding molecular properties for many reasons. The method has high structure accuracy, does an impressive job figuring out Gibbs free energy values for certain reactions, is not as difficult to run computationally as compared to other methods, and takes into account electron correlation, which provides an accurate representation of a system’s energy. The interaction that takes place between certain electrons in a give electronic structure is known as the electron correlation. Electron correlation can be used to find the discrepancies of the Hartree-Fock model. The Hartree-Fock method only finds repulsion energy as an average over the entire molecular orbital, which is not accurate. The correlation energy is determined by finding the difference between the true energy and the Hartree-Fock energy. The
idea that electrons are avoiding one another is known as dynamical correlation. One of the issues with density functional theory is that the scientist has to choose which DFT method to use for certain applications.
Two scientists have had a significant influence in popularizing the density functional theory in theoretical science: Pierre Hohenberg and Walter Kohn. They stated that the energy of the system in question could be found using the electron density functional, which is shown below (a functional is a function of a function).
E[p] represents the

energy of the system, Ts[p] repre-
sents the kinetic energy of the non-interacting system, J[p] represents the electrostatic distribution of the charge, and Exc[p], known as the exchange-correlation functional, represents the information that is not known about the system. Currently, scientists are approximating this exchange-correlation functional by trying out various functional methods, which is the topic of this paper.
Pierre C. Hohenberg, born in 1934 in France, is a world-renowned theoretical physicist. Earning his bachelor’s degree, master’s degree, and doctorate from Harvard University, Hohenberg began working at Bell Laboratories in Murray Hill, where from 1989 to 1995 he became the directer of the department of theoretical physics. Hohenberg has a unique fondness for his home country, as he was guess professor in Paris in 1963, 1964, and 1988. 2004 saw him advance to Senior Vice Provost of Research at NYU [1], but he soon stepped down to be a professor in the Physics Department. Hohenberg was a leading figure outside academia as well, as he was on the human rights committee of the New York Academy of Sciences and a proud member of the National Academy of Sciences and American Academy of Arts and Sciences. His theorems, with Walter Kohn, in a paper written in the Physical Review would give birth to the density functional theory we have today.
Walter Kohn, born in 1923 in Austria, is one of the most important people in the area of theoretical chemistry. After receiving a PhD from Harvard, in the field of physics, Kohn would go on to become a physics professor at Carnegie Mellon University, University of California at San Diego, and University of California at Santa Barbara [2]. Like Hohenberg, Kohn had a large impact outside of academia, as he was a member of the National Academy of Sciences and American Academy of Arts and Sciences. He is, however, best known for winning the 1998 Nobel Prize in Chemistry, who he shared with physicist John A. Pople. He was recognized with the prestigious award for his "development of the density functional theory”. He passed away last year due after his battle with jaw cancer.
Before the discovery of the density functional theory, scientists worked to find the wavefunction of a system, as with it they could completely describe the properties of that molecular system. Every single particle of an atom is given a specific wavefunction, which gives all the calculable information about the particle. The Schrodinger equation, in layman’s terms, predicts the behavior of a dynamic system in the future. It represents how a wavefunction of a system changes and evolves over time. In order to find the wavefunction in the Schrodinger equation, the computer needs initial numbers, which are found using basis set and basis functions. In the Schrodinger equation, which is shown below, the H stands for the Hamiltonian.
Named after the 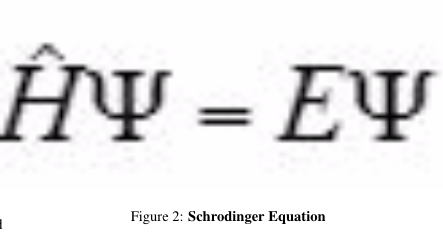 physicist William Rowan Hamilton,
the Hamiltonian acts as an operator, just like how
the plus sign and minus sign work. The energy (E)
of the system can be found by performing the Hamil-
tonian on the wave-function (also called psi and symbolized as). The Schrodinger equation is known as an eigenfunction. In an eigenfunction, the operation that takes place on the left-hand side of the equation results in the same operation times some constant value on the other side of the equation. In the Schrodinger equation, the constant value is the energy of the system.
Of course, there were issues surrounding solely using the wavefunction to provide information about a certain system. First of all, the wavefunction is not something that can be physically analyzed or quantified in a laboratory setting. It is also a function that is confusing, due it having multi-dimensions. In addition, only the square of the wavefunction has any physical value, as it gives information about the probability density. The probability density is made up of numerous variables, adding to the complexity of this technique. There are other ways of making predictions in quantum mechanics, including path integral formulation and matrix mechanics.
Erwin Schrodinger, born in 1887 in Austria, made significant contributions to quantum mechanics. Earning a doctorate from the University of Vienna in 1910, he later went on to serve in the military during World War I. At the University of Zurich in 1926, Schrodinger published his work that would set the stage for the rise of quantum wave mechanics. He stated that matter particles, in some circumstances, behave like waves. His equation, the Schrodinger equation, outlines how a wave equation can predict the behaviour of a certain system. Schrodinger argued that his equation could also determine measurable energies of a system. Not surprisingly, many physicists around the world did not believe Schrodinger’s work and were very reluctant to accept his theory. His most well known objection has become known as Schrodinger’s cat, which states a that poisonous flask, a cat, and a radioactive source are placed in a box. In the event of a decaying atom, the cat is killed due to the release of the poison. When someone opens the box, the cat will be either alive or dead, not both dead and alive, supporting Schrodinger’s claim that questions the validity
of quantum superposition. 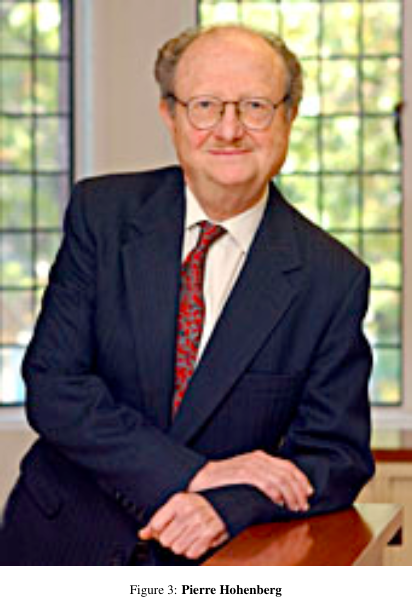 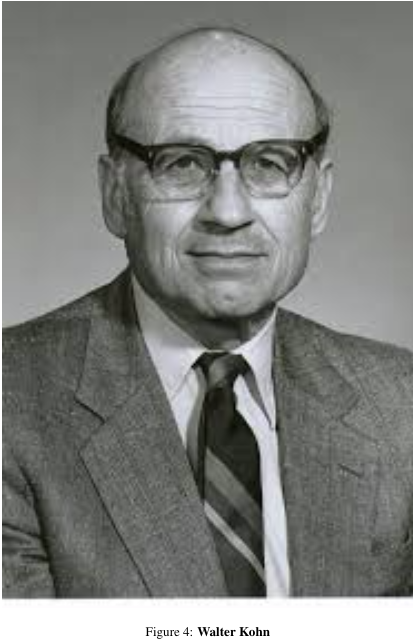 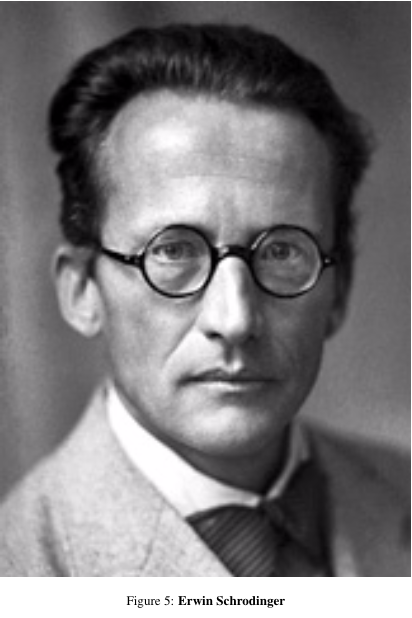 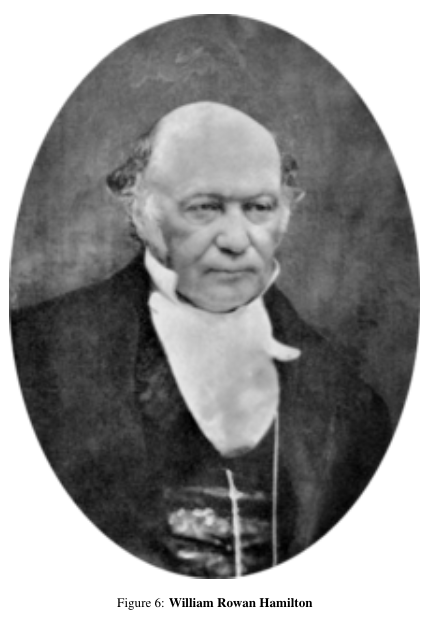 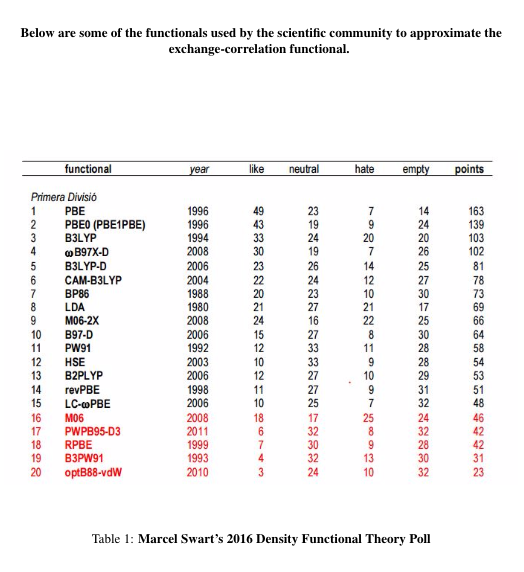 Schrodinger would go on to win the 1933 Nobel Prize in Physics, along with Paul Adrien Maurice Dirac, ”for the discovery of new productive forms of atomic theory” [3]. His novel What is Life? was one of the earliest attempts to explain genetic structure and added new interest into the field. The last true Renaissance man, Schrodinger, throughout his illustrious life, changed science into what it is today.
William Rowan Hamilton, born in 1805 in Ireland, is well known for his work that paved the road for the rise of quantum mechanics and quantum relativity theory. At Trinity College, he was Professor of Astronomy, the last position he had before he went to Dunsink Observatory [4]. Hamilton’s tweaking of classical mechanics gave scientists new ways to use motion equations.
In this paper, I take a look at the various functionals used to approximate the exchange-correlation functional, which finishes the electron density functional that provides us with the energy of the system in question.

In Marcel Swart’s 2016 density functional theory poll, BLYP was ranked the third most popular functional in the second division. For compounds that contain metals and transition metals, this functional provides accurate energy values. However, when dealing with organic systems, BLYP is not very accurate. BLYP should especially not be used to find these molecular properties: excitation energy, spin state splittings, and chiroptical properties.

A type of gradient-corrected functional, BP86 has a Becke88 exchange functional and a Perdew correlation functional. In Marcel Swart’s 2016 density functional theory poll, BP86 was ranked the seventh most popular functional in the first division. BP86 accurately predicts molecular geometries, transition metals, and relativistic elements. Scientists don’t use it when trying to find spin state splittings or anything related to nuclear magnetic spectroscopy.

In Marcel Swart’s 2016 density functional theory poll, PBE was ranked the most popular functional in the first division. There is a reason why this functional is so popular, as it very accurate in predicting reaction barriers, transition elements, main group elements, relativistic elements, and properties related to nuclear magnetic spectroscopy. However, PBE should not be used to find excitation energies. 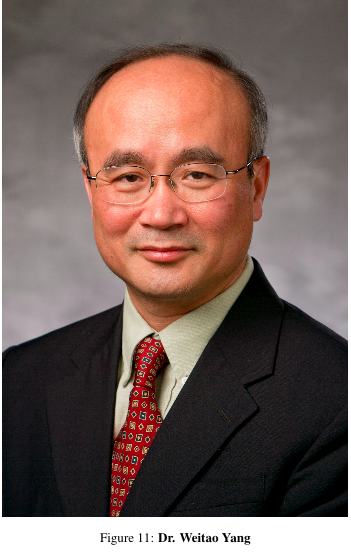 For those in the computational chemistry field, hybrid functionals are the most popular and common type of DFT method. They are even sometimes known as ACM functionals, which stands for adiabatic connection method. Hybrid functionals are very accurate at predicting the change of Gibb’s free energy in a system and at finding a geometry optimization but are more computationally costly than local density approximations and gradient-corrected functionals. These types of functionals bring together ab initio methods (majority of the time Hartree-Fock methods) and density functional theory mathematics. In other words, a hybrid functional is a functional that has electron correlation, exchange energy with a density functional theory approximation, and exchange energy with a Hartree-Fock approximation all combined together [7]. Ab initio methods are those in which Schrodinger equation is used to create the entire model mathematically. More specifically, Hartree-Fock methods take into consideration the average effect of correlation of one electron on another electron in a system. Hybrid functionals usually overpredict bond lengths of molecules.

As the search for the best functional to approximate the exchange-correlation functional progresses, it can be said that the easiest way to get a PhD in chemistry is to create a better functional than those that exist today. From the information in the previous section, it can be seen that the two best functionals are the PBE gradient-corrected functional and PBE0 hybrid functional, due to their versatility to find numerous properties of a system. Whenever in doubt about what functional to use for a given system, the B3LYP hybrid functional, as well as the two functionals stated above, should be chosen. Keeping in mind that each functional class has certain applications and scenarios it works best in, in general, scientists should stick away from local density approximations, due to their primitiveness and by the availability of more useful functionals. As density functional theory continues to grow and become more and more popular, the field of computational chemistry will soon be pushed into the spotlight.

The author thanks Mr. Robert Gotwals for his assistance with this paper. 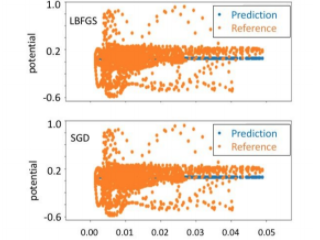