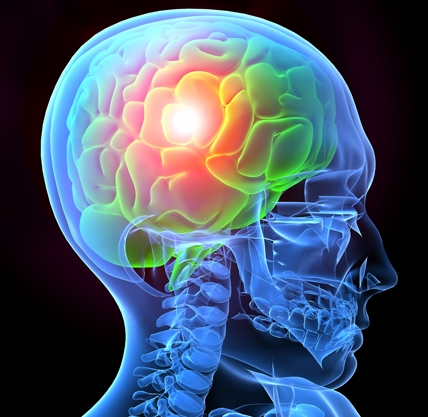 Background: Traumatic brain injury (TBI) is a major issue in young children with current treatment limited to rest. TBI’s negative health effects may be mitigated by decreasing associated inflammation.  Progesterone is a hormone with potential to decrease inflammation.   Microglia are brain macrophages that mediate inflammation and express Iba1 and ED1 proteins during active inflammation.  Injured axons express APP. By targeting ED1, Iba1, and APP through immunohistochemistry, the degree of inflammation and axonal injury can be measured.

Hypothesis: Inflammation and axonal injury, as measured by Iba1, ED1, and APP levels, will decrease when progesterone is administered following injury.

How does progesterone affect inflammation and axonal injury in neonatal rat brain injury?

Traumatic brain injury (TBI) is a major medical problem with limited therapeutic options. The current treatment approach is one consisting primarily of stabilization and rest. Progesterone is a hormone that has the potential to decrease inflammation, injury, and risk of death from TBI. However, while the majority of TBI related ER visits are for children ages 0-4, almost all of these studies have been done on adults and thus progesterone’s effect on TBI in the developing brain remains unknown.

Progesterone is a steroid hormone that occurs naturally in the body. The hormone is more prominent in females and is involved in reproduction. Progesterone is secreted by the corpus luteum in the menstrual cycle and helps maintain the endometrium during pregnancy.6  There are small amounts of progesterone in both male and female brains.8 Progesterone is produced in the brain, adrenal glands, and testes in males.21 Traumatic brain injuries (TBI) are a very prominent issue, with 1.5 – 2 million occurring every year in America alone.7 Currently, treatment of TBI is very limited and consists mostly of stabilization and rest.7  However, a link has been found between progesterone and brain injuries.  In recent studies conducted by Wright et al.10  adults with brain trauma were injected with progesterone. The progesterone had no negative effects and was found to be potentially beneficial in decreasing injury.  In addition, the hormone has been shown to reduce brain swelling and the risk of death in brain trauma patients by 40%.8  There have also been studies showing progesterone’s potential to reduce inflammation. Progesterone has been shown to modulate cytokines that promote microglial activation. A reduction in cytokine levels inhibits the immune system and lowers activation of microglia, which in turn decreases axonal injury and brain damage.18

Immunohistochemistry is a staining technique used to diagnose disease, make drugs, and advance biological research. Immunohistochemistry utilizes the specificity of antibodies, types of proteins found in the immune system. Each antibody has a different shape causing it to only be able to bind to a specific antigen (foreign particle). Immunohistochemistry staining uses antibodies that are specific to the protein or cell that is targeted. In this process, tissue is treated with a primary antibody that binds to the target cell or protein in the tissue. In order to visualize where the primary antibody attached, a secondary antibody that is specific to the first is then applied that contains an indicator. The secondary antibody binds to the first, and allows quantification of the amount of the target protein.3

Progesterone may have anti-inflammatory effects. Inflammation is a part of the primary immune response and is an important cause of axonal injury. Microglia are macrophages that are involved in the primary immune defense of the brain and central nervous system. Microglia become activated with trauma and migrate towards injury. Its presence in brain tissue can be used as an inflammatory marker.1 A double immunostaining with Iba1 and ED1 can be used to mark the microglia in the brain. Iba1 is a calcium binding protein specifically expressed in microglia.17  ED1 is a glycoprotein that is found on the cell membranes of active microglia. 16 Expression of Iba1 occurs on all microglia (active or inactive) that migrate towards trauma.11

Neurons are cells specific to the brain and nervous system. Axons carry electrical impulses from neuron to neuron.  Many axons are located in the white matter tracts of the brain. Head trauma can cause damage to axons in the brain.13 Amyloid precursor protein (APP) is a membrane protein located in the synapses of neurons. Its function is not entirely known, but it is thought to help regulate synapse formation and neural plasticity.20 An APP immunohistochemistry can be used to label injured axons.2

To obtain the tissue for the immunohistochemistries, pregnant mother rats were ordered from Charles River Laboratories, and they gave birth to litters. Thirty two rats, both males and females, were used (at such a young age there is no significant difference in sex).6  The rats were divided into 6 groups. Sham rats (uninjured animals) were to be given either a placebo (sesame oil) or 8 mg/kg of progesterone. Animals that were to be injured were to be given either the placebo, 4 mg/kg progesterone, 8 mg/kg progesterone, or 16 mg/kg progesterone. Since steroid hormones like progesterone are nonpolar, they can dissolve in nonpolar oils. Sesame oil was the vehicle (medium to carry the drug) used to deliver progesterone into the rats and has no effect on the brain. Thus, it can be used as a placebo. Rat age, species, severity of brain injury, temperature, and location were controlled for.

Eleven day old rats were injured by lateral controlled cortical impact injury and their brains were obtained with a standard procedure. When the rats reached 11 days old, a craniotomy was performed on them by personnel trained for IACUC approved protocol. Caps were placed in the rats’ heads at a set position and the caps were latched to the end of a water tube on a machine. A pendulum starting at a specific angle (to control the severity of the injury) was released, hitting the water tube and sending a pressure wave to the rats’ heads, causing TBI. Both the sham and injured animals received this treatment, but the pendulum was never released for the shams so that they did not get TBI. The rats were then treated with their specific amount of progesterone or placebo every day for 7 days following injury. The rats were then perfused and euthanized. Their brains were extracted and sliced to appropriate thickness.

ED1 staining marks microglial activation and inflammation in the white matter. The average percentage area of the white matter stained with ED1 for each tissue is shown in Figure 1. 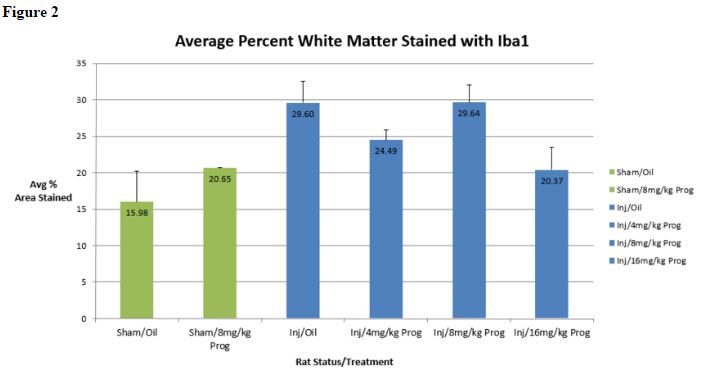 Iba1 staining marks microglial migration and inflammation in the white matter. Figure 2 shows the average percent area of the white matter stained with Iba1 for each group.

Similar to ED1, there appears to be an increased prevalence (as measured by percentage of stained area) of Iba1 in injured rats, compared to the shams.

In the injured rats, progesterone led to a numerical reduction of Iba1 staining at the 4mg/kg and 16mg/kg level compared to oil (placebo) but did not appear to do so at the 8mg/kg concentration.

Main Finding: Rats treated with 16 mg/kg progesterone had smaller percentage white matter staining of and Iba1 (29.6% vs. 20.37%) as compared to placebo.

Statistical Analysis of ED1 and Iba1

An ANOVA, analysis of variance, was performed for both the Iba1 and ED1 data sets. A significant difference (p<0.05) for both antibodies was noted between each group of rats tested (p=.0001).  This significance allows the development of the conclusion that the percentage of staining was in fact different between groups. Therefore, given the numerical reduction in Iba1 and ED1 with high dose progesterone, it is likely that high dose progesterone did provide activity in modulating the inflammatory response. 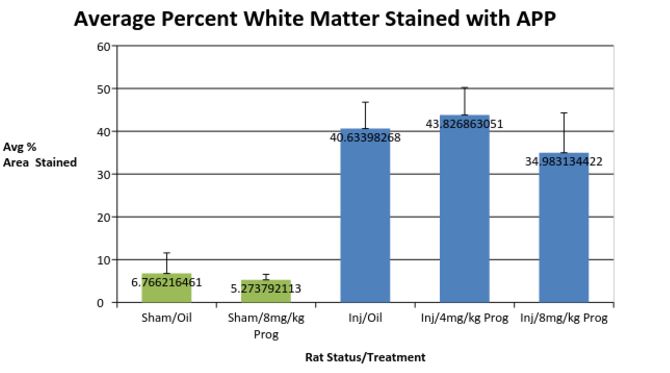 A Kruskal-Wallis Test (nonparametric ANOVA), was performed for the APP data set.

A significant difference (p<0.05) for was noted between each group of rats tested.  This significance allows the development of the conclusion that the percentage of staining was in fact different between groups. Therefore, given the numerical reduction in APP levels with high dose progesterone, it is likely that progesterone provided activity in decreasing axonal injury.

The hypotheses “If progesterone is administered to neonatal rats with brain injuries, then a decrease in inflammation, as measured with Iba1 and ED1 levels, and a decrease in axonal injury, as measured with APP levels, will be observed” is accepted. A drug effect was seen in ED1 staining with 16 mg/kg Progesterone in injured neonates. A drug effect was also seen in Iba1 staining in the 4 mg/kg and 16 mg/kg Progesterone in injured neonates.  High dose progesterone also reduced APP staining. High dose progesterone in neonates, as seen in previous studies in adults, appears to have a beneficial effect in reducing markers of inflammation and axonal injury and should be further explored as a possible therapeutic option in young children.

There were some sources of error in this project that could have skewed the data.  The 8mg/kg progesterone group for the Iba1 injured animals and shams did not appear to have a numerical effect on the percent staining. The drug may have been in too low of a quantity to have an effect, or it may have been a defective drug. Alternatively, the rats in this subgroup may have been subjected to extraneous, unknown variables. Additionally, tracing of the white matter as well as counting of APP staining, used to determine the percentage of area stained for each antibody, was performed by hand. This manual system may have led to inconsistencies in the data. However, given that the experimental design was a blinded, randomized, placebo design, the impact of any tracing errors should be neutralized and consistent across all subgroups. Future experimentation could include a retest of the effect of Iba1 with 8mg/kg of progesterone, using new animals.

Research was completed at Raghupathi Lab in Drexel School of Medicine. Special thanks to mentors Ramesh Raghupathi, PhD and Laura Krafjack, PhD candidate.