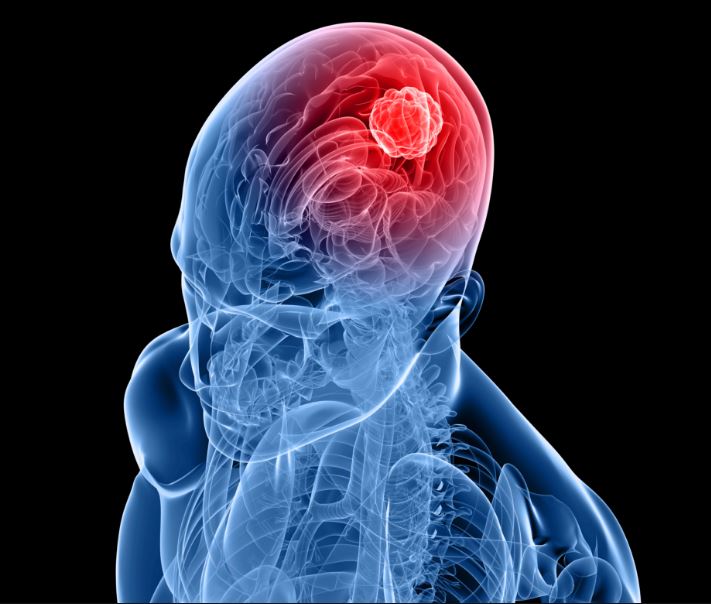 Glioblastoma (GBM) is the most common primary brain tumor in the US and European countries and also the deadliest.  Glioblastoma cells exhibit a different gene expression profile from normal cells. There are 601 known mutations in GBM tumors. The aim of this study was to identify the most important proteins in the glioblastoma pathway that lack drug treatments. A total of 15 proteins were identified as pathway starters or driver proteins and 52 proteins were identified as passenger proteins using 3 databases. Protein-protein interaction maps and heatmaps were created and proteins were ranked based on the number of connections each protein exhibited. The top 9 proteins were identified that are important in GBM pathway. Then a protein-drug interaction map and heat map were created to find influential disease-causing proteins that currently lack drug treatments. Through this method, TERT, MDM2, and RB1 were found to be important proteins that lacked drug treatments. Drug development is needed to target these genes and a multiple target approach is needed since more than one pathway is involved in all GBMs. This could lead to new therapeutic options for glioblastoma.

Glioblastoma Multiforme (GBM) is the most malignant form of brain tumor with a median survival of 15 months. 1 The annual incidence of GBM is 3.19 per 100,000 people in the USA.2  Glioblastoma is caused by over-expression of oncogenes, inactivation of tumor-suppressor genes, and dysregulation of signaling proteins. A number of abnormalities in protein pathways lead to the development and growth of this tumor. There are 601 known mutations in GBM tumors, some of which regulate the key steps that contribute to tumor development and growth.3  For this reason, I used a computational method to find the most important proteins in GBM for future drug research. The current treatment of GBM includes surgical resection of the tumor, followed by radiation and chemotherapy. Surgical treatment of cancerous tumors usually involves the removal of some normal tissue surrounding the tumor, in order to ensure that there are no microscopic remnants of the tumor. This helps in preventing recurrence of these tumors.  GBM is extremely hard to remove completely by surgery because of its ill-defined boundaries and location. An attempt to remove normal brain tissue surrounding the tumor can lead to serious neurological sequelae. Therefore, radiation and chemotherapy are given to kill the remaining tumor tissue. Radiation has similar limitation as surgery because it can destroy normal brain tissue also. Chemotherapy, given in the form of drugs, targets various proteins involved in the tumor development and growth pathway in order to prevent recurrence. The five-year survival rate with current treatment regimens is only 4-5% and the median survival is 15 months. 1 There is an unmet and urgent clinical need for new drug development in this area.

Three databases were studied to identify driver genes or pathway starters in glioblastoma. A starter or driver protein is the main protein that initiates a cellular pathway. A passenger protein is a protein that plays a minor role somewhere along the cellular pathway, but is not essential to it. These databases were KEGG (Kyoto Encyclopedia of Genes and genomes), COSMIC (Catalogue Of Somatic Mutations In Cancer), and TCGA (The Cancer Genome Atlas)4,5,6 A total of 15 pathway starter proteins were recorded using these databases. These 15 proteins are EGFR, PDGFRA, PTEN, PIK3CA, PIK3R1, H3F3A, TERT, RB1, MDM2, CHEK2, CDK4, CDKN2A, TP53, NF1, and IDH1. From these sources, 52 other proteins were also identified as important in glioblastoma pathways but were not pathway starters. These are the so called passenger proteins.

Protein-protein interaction (PPI) maps were created using the STRING (Search Tool for the Retrieval of Interacting Genes/Proteins) database.7 PPIs occur when proteins bind together to perform their biological function that are important in signal transduction pathways inside the cell.8 PPI map depicts these various interactions by creating a node on the graph for each protein and connecting the two nodes with an edge if the proteins interact. STRING is a database of known and predicted protein interactions. In STRING, PPIs are predicted based on the following: 1) Genomic context, 2) Co-expression, 3) High throughput experiments, and 4) Database mining. Proteins with the greatest number of connections to other proteins should logically have a greater degree of influence in protein pathways.

The set of protein pathway starters was then compared against the list of proteins that have existing drug treatment options to see where future development is needed. This was done using the database Cmaps (connectivity maps) and Dgidb (Drug gene interaction database).10,11,12 These databases display proteins with drugs that target cells with that particular protein mutation. The set of 9 important driver proteins were searched and downloaded and the number of FDA approved drugs that target each protein were recorded from the databases mentioned above. Also the number of evidence articles and average drug associations for each drug was recorded. Drug association refers to how effective the drug is in targeting cells with a mutation in that protein. The average drug association is the sum of the associations for all protein-drug interactions divided by the number of protein-drug interactions for a particular protein.A heat map and graph was then created to determine areas where drug development is lacking. 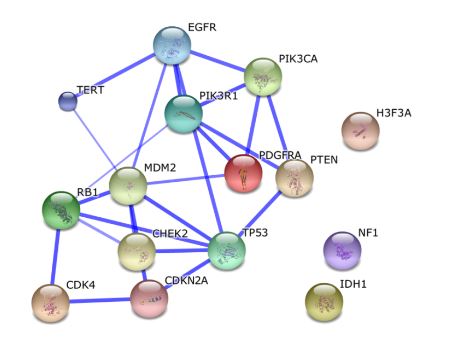 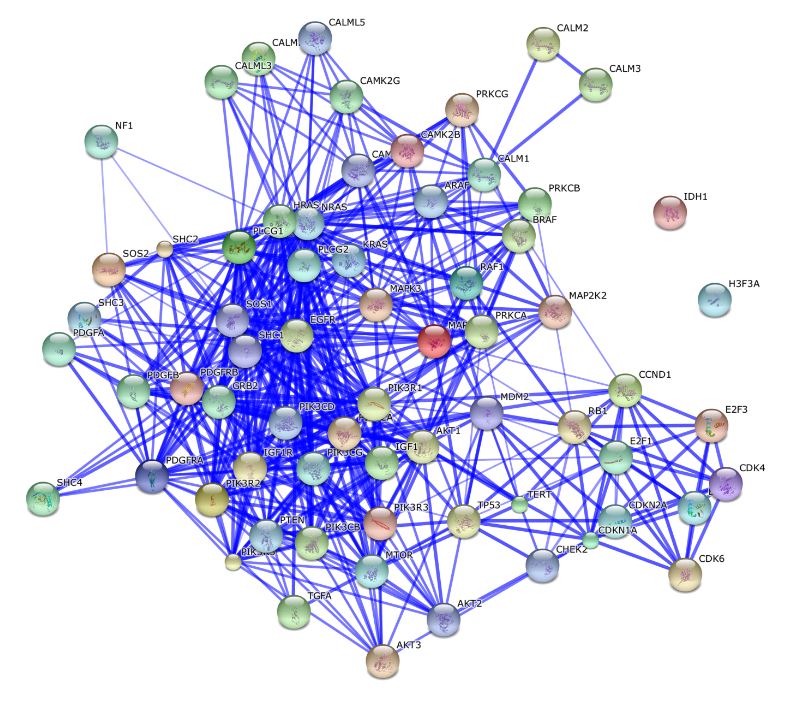 Figure 2: A protein-protein interaction network of all proteins involved in the GBM pathway identified in this study.

A heat map is visualization for a matrix that shows a correlation between a protein and a factor by color, with higher correlations depicted by using darker colors.9

Table 1: Heat map to predict the importance of proteins in GBM pathway 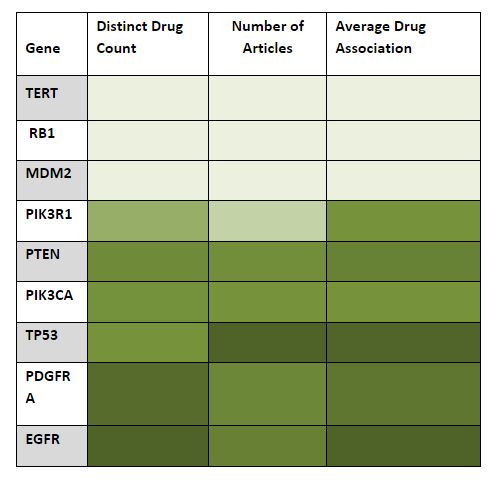 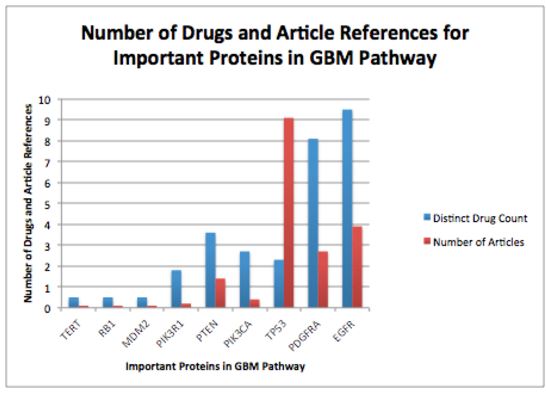 Figure 3:  A bar-graph showing nine important proteins in GBM pathway on the x-axis and the number of drugs and number of article references on the y-axis.

A drug-protein interaction map and heat map was created and TERT, MDM2, and RB1 were found to be important proteins that lacked drug treatments.

Through this method, TERT, MDM2, and RB1 were found to be important proteins in glioblastoma pathway that lacked drug treatment. PPI maps and heatmaps can help bring attention to new drug targets, as well as rank these drug targets in order of influence in their cancerous pathway. Drug development is needed to target these genes that lack drugs treatment and multiple target approach need to be used. This could lead to new therapeutic options for glioblastoma. Since more than one pathway is involved in all GBMs, multiple target approach is needed with combination of drugs.  Computational, mathematical and statistical methods need to be brought to the forefront of medical research in order to gain control and fight against cancer.