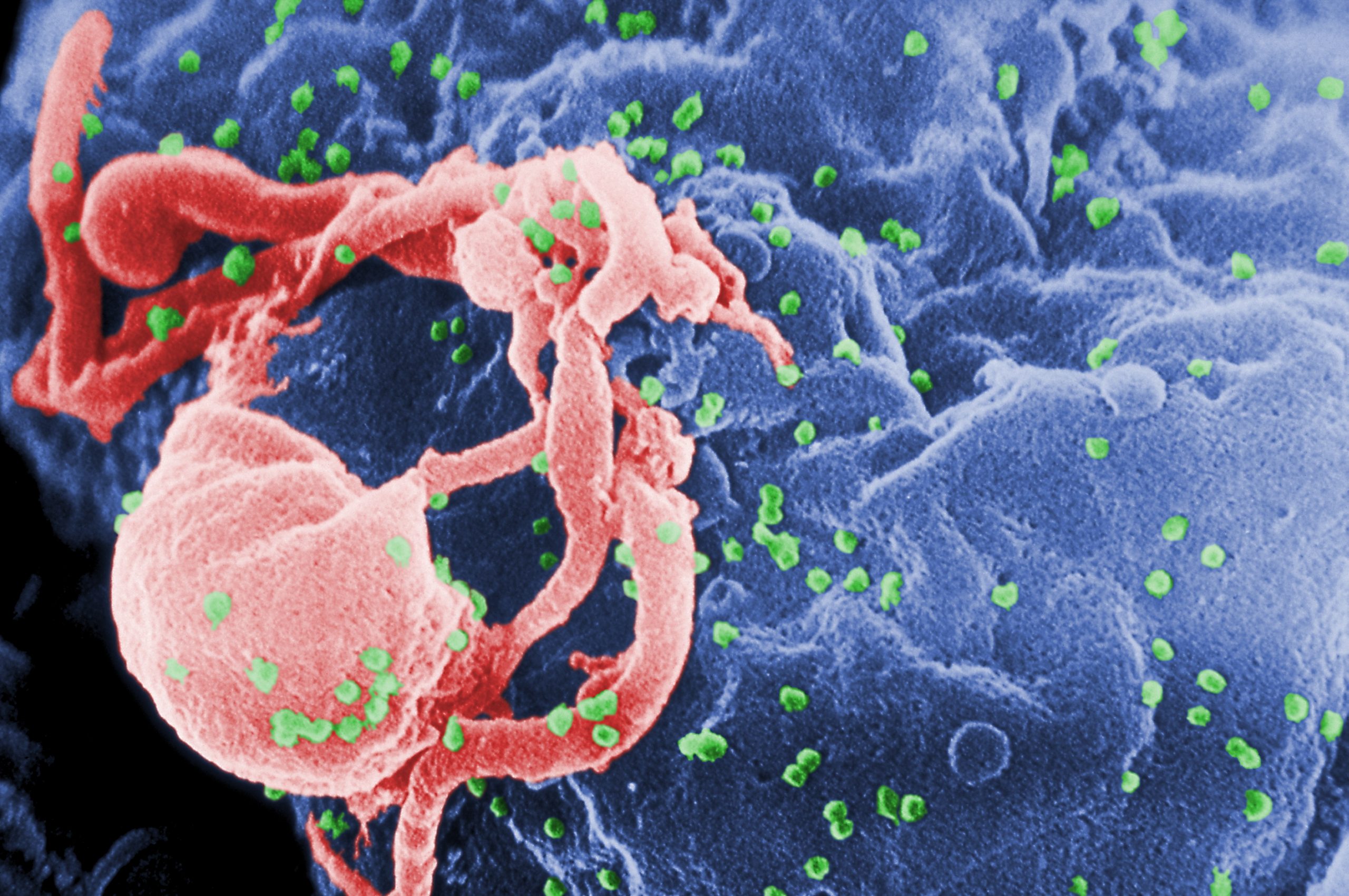 AIDS is a deadly condition that kills millions of people every year. When the immune system is disabled by the Human immunodeficiency virus (HIV), AIDS can occur. This often leads to death. Understanding the life cycle of HIV can introduce possible drugs or vaccines, which could prevent the immune system from being invaded by HIV.

HIV is a retrovirus, which is a virus that contains single stranded RNA (ssRNA). An HIV retrovirus destroys cells of the immune system that have CD4 receptors on their plasma membrane. CD4 receptors are proteins present on the surface of Thymus lymphocytes (T cells). A macrophage is a monocyte that also has CD4 receptors. Macrophages ingest foreign material, which is an important function in the immune response to foreign invaders. If there is a low concentration of macrophages, the immune system cannot respond to threats. An HIV retrovirus is not a cell because the retrovirus can only replicate if it obtains a host that can provide various materials necessary for the replication of the retrovirus. The viral envelope surrounding it is one ten thousandth of a millimeter in diameter and made up of two layers of fatty molecules called phospholipids. Also, embedded into the envelopes surface are two glycoproteins called gp120 and gp41 (the number in these two glycoproteins stand for the molecular weight in kilodaltons). The core of the HIV retrovirus is made of a capsid protein structure, which is structured with several oligomeric subunits. The capsid protein structure contains two single stranded RNAs and a few different enzymes, such as two reverse transcriptase, integrase, and protease. These materials will all be utilized for the replication of the retrovirus.

The beginning of the reproduction cycle of the HIV retrovirus begins with the attachment of a gp120 to a CD4 receptor on a host cell, such as the helper T lymphocyte. The attachment of a gp120 and a CD4 receptor must have the assistance of an envelope protein. After this attachment, gp120 attaches to one of two chemokine co-receptors on the cell (CCR5 or CXCR). The attached gp120 and co-receptor undergo a conformational change. After the conformational change of gp120, gp41 has the ability to make a structural change. The structural change allows the attachment to the cell by using spring mechanisms. These mechanisms snap shut forming what is known as the “trimmer of hair pins” that imitate grappling hooks. When the “trimmer of hairpins” hook onto the host cell’s membrane, the viral envelope fuses to the host cell. After the fusion of the viral lipid membrane into the cell’s plasma membrane, the capsid protein structure enters the cell’s cytoplasm.

During entry, the capsid protein structure is digested by cellular enzymes, allowing the viral material to freely move about the cell’s cytoplasm. Before integrase enzyme can splice genetic information into a chromosome in the nucleus, viral enzymes must first convert viral single stranded RNA (ssRNA) into double stranded DNA (dsDNA). The dsDNA is the genetic information that will be spliced into a chromosome in the nucleus.

The viral enzyme reverse transcriptase catalyzes the synthesis of a DNA strand complementary to the viral ssRNA through reverse transcription. Reverse transcriptase has a very high error rate, which creates mutations in the copied DNA.  The mutations cause various types of HIV, which enables HIV to adapt to drugs quickly. This explains the reason why it is difficult to treat HIV.  After the viral ssRNA is copied into complementary DNA (cDNA), the ssRNA is destroyed by another viral enzyme, called ribonuclease. Next, transcriptase of the cell unknowingly catalyzes the synthesis of a second DNA strand complementary to the first. This creates a viral dsDNA by transcription. The dsDNA is moved into a circular loop so that integrase can hydrolyze the dinucleotides on both 3’ ends. This modification is necessary so that the dsDNA can be spliced into the dsDNA of the host cell.

The viral dsDNA is then guided to the nucleus by a pre-integration complex where it enters a nuclear pore. Viral integrase enzymes splice the viral dsDNA into the cell’s chromosomal DNA and repair mechanisms of the host cell fill in the missing base pairs. The integrated viral DNA is known as a provirus, meaning that the viral dsDNA will never leave the host genome. The provirus is capable of replicating independently from the chromosomal DNA, which explains why the synthesis of viral mRNA is so unique.  The cell’s RNA polymerase then transcribes the proviral dsDNA into RNA molecules via protein biosynthesis. The RNA molecules will be used as mRNA for the synthesis of viral proteins and as genomes for the new virus particles that will make up the new capsid protein structure that will exit the cell by budding. The proviral mRNA molecules would go through translation within a ribosome to create a polypeptide chain. This process would take place in the cytoplasm or more likely in the rough endoplasmic reticulum (RER). Viral protease enzymes would then cut the polypeptide chain into individual viral proteins such as reverse transcriptase, protease, integrase, and proteins that form the capsid protein structure. Also, traveling to the RER mRNA would provide genetic instructions to create glycoproteins such as gp120 and gp41. The glycoproteins would travel to the Golgi apparatus in order to be modified with carbohydrates. The Golgi apparatus would provide a vesicle for transportation of the glycoproteins to the cell’s membrane. At the cell’s membrane capsid proteins would assemble around full-length viral ssRNA molecules, along with other viral components. The capsid protein structure would acquire parts of the cell’s outer envelope while experiencing a process called budding. HIV budding requires TSG101, a cellular molecule that arranges proteins into vesicles that bud into multivesicular bodies. The acquired envelope acts as a covering and is studded with glycoproteins, which were transported by vesicles of the Golgi apparatus. The addition of the glycoproteins creates an immature HIV retrovirus. After budding, the immature retrovirus begins to mature by several modifications guided by protease. This ends the reproduction cycle of the HIV retrovirus. Investigators are researching on how to eliminate TSG101 so that the HIV retrovirus cannot travel to other immune system cells.

Since the DNA in the host genome is a provirus, the cell will continue replicating HIV retroviruses.  HIV invades only cells that have CD4 receptors on their plasma membrane, which is only a percentage of the cells in the immune system. The lack of cells in the immune system allows common illnesses to destroy the immune system completely. There are a few treatments for HIV and the best idea is to stop HIV before it fuses into the host cell. Professor Peter S. Kim and his team of the Howard Hughes Medical Institute HHMI has identified D-peptide inhibitors of the HIV infection that bind to pockets of the T cell, which lays the ground work for the biological inhibitors of HIV entry.  His team also created compounds that fit into these pockets, when attached to a longer peptide, to block the reaction of gp41. His team tested their idea of protein inhibitors that bind to the C-terminal end of gp41, jamming the “trimmer of hairpins”. They synthesized a small protein that would attach to the C-terminal on gp41 called 5-Helix. As a result, 5-Helix isolated the HIV virus. Professor Kim believes 5-Helix is an effective treatment because it can be enlarged to reduce the possibility of the kidney from eliminating the 5-Helix protein. The treatment is also effective because carbohydrates molecules can be added to shield the protein from being eliminated by the immune system. As of now professor Peter S. Kim is experimenting on monkeys with his team.

Various drugs have been formed to prevent HIV reproduction by understanding the life cycle of the retrovirus. Three antiretroviral drugs are part of a treatment that must suppress viral replication. Through a therapy called Highly Active Antiretroviral Therapy HAART, these three drugs are used.  NRTIs, NNRTIs, and NtRTIs are antiretroviral drugs which, must be metabolized in the infected cell in order to become active. NRTIs are types of DNA building blocks that replace naturally occurring viral DNA building blocks. When the reverse transcriptase enzyme is building cDNA, the enzyme transcribes NRTI which blocks reverse transcriptase from building any farther..  Although NRTI seems effective, the HIV retrovirus has developed drug resistance mechanisms to NRTIs. NNRTI is another good idea on how to stop the creation of cDNA. NNRTI attaches tightly to a binding site on reverse transcriptase preventing the enzyme from synthesizing cDNA. Again, this drug seems effective but, the HIV retrovirus has developed a mechanism that stops the binding of NNRTI.