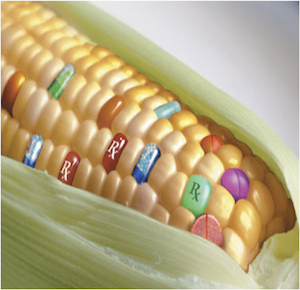 Imagine a huge field of verdant tobacco leaves. You may shake your head thinking that the leaves could soon become carcinogenic cigarettes. But what you probably do not know is that this tobacco is going to be used for a much better purpose. Surprisingly, it may be instrumental in the treatment of diseases such as cancer, anthrax and rabies and even the prevention of cavities. Instead of causing disease, tobacco has the potential to treat and cure it. This ability to treat illness lies in plantibodies, which are recombinant antibodies formed from human and plant genes.

An antibody is a molecular protein which fits with an antigen such as a tumor cell or foreign bacterium1. On the antibody there is a binding region, which is variable depending on the shape of the antigen which it will bind to.  Additionally there is a constant region which denotes the type of antibody. The binding region fits with its corresponding antigen and binds to it. T cells, also known as killer cells, then exterminate the antigens which have been flagged. When an antigen enters a host, antibodies that can bind to the foreign bodies are rapidly duplicated from B lymphocytes to combat and eradicate the pathogen2. However, sometimes the various components in this complex immune response are not produced or become diseased and if one is missing, problems will occur. Therefore, if a factor in the virtual assembly line of the immune system is not working, a person can fall ill.

In response to this lack of antibody production, scientists tried to come up with a way to counteract it. They knew that if a sick person received the specific antibodies to combat a certain pathogen, then the person could actually be treated. A number of years ago, scientists found that the constant region of a human antibody could be transgenically combined with the binding region of an animal host, such as a mouse, to create a recombinant antibody. Antibodies could be produced in the mouse and then extracted and administered to fight illness. This seemed like an excellent plan; however, reality was a little less perfect than the dream seemed to be.

When research on recombinant antibodies first commenced, everyone was starry-eyed. Finally a plentiful and hopefully affordable treatment for diseases such as cancer and diabetes was forthcoming! However, some serious problems arose. Although scientists could produce the antibodies, the process turned out to be very expensive and dreams of a cheap cure for terminal illnesses seemed to disappear3. More importantly, purifying the antibodies was problematic as different chemicals could cause issues in the antibody’s efficacy. Additionally, mammalian antibodies could carry pathogens deleterious to humans4. Finally, mammalian antibodies can be recognized by the human immune system as foreign and trigger a rejection response. As a result, a number of scientists soon believed that animal antibodies were not the best option for treating disease5.

However, there was still one more option outside of the animal world. Around 1990, plants were first considered as a potential host for producing antibodies and the term “plantibody” was coined5. Plantibodies work in a similar fashion to mammalian antibodies, but they have multiple advantages. First, plants are widespread, abundant, and grow quickly. Therefore, the cost of antibodies produced by them is substantially less than their animal counterparts. Second, plantibodies do not transfer pathogens to humans, although they must still undergo purification for certain substances that may affect them. They do not trigger immune responses which animal antibodies are prone to do. Plants also produce a relatively high yield of antibodies in a comparatively fast time6.

Amazingly, 360 million doses of plantibodies against anthrax can be produced from a single acre of tobacco7! Not only is tobacco so productive, but also corn is as well, providing 1.5 kg of antibodies per acre – a particularly high yield. According to Vikram M. Paradkar, a plantibodies scientist at Agracetus, a large lab that genetically modifies plants, “We could grow enough antibodies to supply the entire U.S. market for our cancer drug – tens of thousands of patients – on just 30 acres”8. This asset will prove most valuable in areas where space is limited or weather conditions may be less than ideal.

Although plantibodies have many advantages, there is a significant concern. Botanists worry that the plants carrying antibodies could contaminate food crop strains. There is the possibility that the purity of strains could be jeopardized. More importantly, scientific literature suggests that plants that do not serve as food for people or livestock, could be utilized9. Plants such as tobacco or moss fall under this category10.

Human diseases cannot be passed through, plantibodies but according to scientists, toxins from pesticides or fertilizers could be transmitted – just like any normal plant8.  However, this problem can be greatly reduced and almost eliminated by producing plants in contained areas such as greenhouses. In this way, plantibodies would not mix with other crop strains and the scientists could choose to forego spraying the plant hosts with fertilizers and pesticides. Fortunately, being contained in greenhouses would not hamper the plants’ production of plantibodies as large amounts of antibodies can be extracted from relatively small plots of land.

This is where tobacco comes in. According to the scientists, “tobacco has proven to be a promising alternative for the production of recombinant therapeutic proteins and offers numerous advantages over other plants as a host system”11. Although work has been done on soybeans, potatoes, corn, alfalfa and similar crops, tobacco seems to be a favorite12. It grows quickly and through numerous tests, has been shown to produce comparatively large amounts of antibodies. Additionally, tobacco is a non – food / non – feed crop, which means that if grown in a greenhouse, the use of tobacco as a host would eliminate the small chance of cross-contamination. Being a non-food / non-feed crop would also mean that the use of tobacco for antibody production would not remove any food staples from the industry or contribute in the slightest to a food shortage.

The first plantibody created from tobacco was called CaroRx. This antibody works to prevent the growth of certain bacterial colonies on human teeth and thereby prevent cavities.  A study was conducted in which four trial groups participated13. One group was given doses of saline solution as a placebo and the other groups were given either two, four or six doses of CaroRx. The results of the study showed that while the plantibodies did not completely eradicate the bacterial population, the group with 6 doses of CaroRx had significantly fewer bacterial colonies compared to the placebo group.

In another study conducted by biotechnologist Anna Hull and her associates14, plantibodies engineered to bind to Bacillus anthracis were extracted from transgenic strains of tobacco. These antibodies were then tested to see if they could indeed fight the bacterial disease, anthrax.  Five mice were either administered 180 micrograms of the plantibody or given a phosphate-buffered saline as a placebo. Soon after, the mice were all injected with a solution of the phosphate-buffered saline mixed with a lethal dose of anthrax spores. The rodents were carefully monitored for fourteen days. The experimental results showed that all mice given the placebo solution contracted the disease; however, the mice fortified with the plantibody never contracted the disease! This is strong evidence that the antibodies were effective in fighting the Bacillus anthracis strain and bodes well for the future if ever there is an anthrax epidemic, as there will be a cheap and effective prevention of the disease.

In a similar study, an antibody against the Lewis Y antigen was created in tobacco15. This antigen, which is found on tumor cells in colorectal, breast, lung and ovarian cancer, was injected into a group of mice. Afterwards, either plantibodies or mammalian – derived antibodies against the Lewis Y antigen were administered to a portion of the mice with the injected cancer cells every three days. As the scientists had hoped, there was no tumor formation in the groups being treated with antibodies of both kinds for the following three and a half weeks16. The control group experienced tumor growth by the tenth day after the first injection. At the twenty eight day mark there was some growth in the plantibody and mammalian antibody groups with a slightly greater tumor volume in the former. However, both antibody groups had much less cancer cell growth than the control group. Overall, the plantibody group had a definitive positive effect on the cancer-stricken mice.

A treatment or cure for rabies through plantibodies has also been investigated. According to pharmacist Kristi Monson and practicing doctor Arthur Schoenstadt, the current non-plantibody vaccine “works by stimulating a person’s immune system to produce antibodies that neutralize the [rabies] virus. The person develops a protective immune response before the virus reaches the brain and begins to actively replicate”17. In this way, if the body came in contact with rabies again, there would already be antibodies inside the body to combat them. Kisung Kop and his associates at the Biotechnology Foundation Laboratories at Thomas Jefferson University, say that current rabies vaccines may be difficult to obtain or patients may have an adverse reaction as a result of the vaccine18. Monson and Schoenstadt accede: “Some possible side effects of the vaccine can include fever, headache, nausea, dizziness, and pain or swelling at the injection site”19.  Kop and his fellow scientists have created a plantibody-based vaccine in tobacco and experimented on hamsters to identify whether it could effectively target rabies. According to Kisung Kop, the plantibody vaccine proved to be a “safe and economically feasible alternative to the current methods of antibody production in animal systems”18.

Antibodies against ovarian, testicular and colon cancer as well as melanoma, B-cell lymphoma and human papillomavirus have already been expressed in transgenic tobacco20. These plantibodies are currently being researched and are on their way to being approved for human use. Plantibodies called DoxoRx and RhinoRx for post-cancer therapy and rhinoviruses respectively are in various stages of completion. Already, CaroRx has been used in human trials and a tobacco plantibody against a poultry virus has been approved by the USDA21. It seems very likely that many vaccines and cures derived from plantibodies are on the brink of being introduced to the public or at least will be soon.

According to Keith Wycoff13, a scientist from Planet Biotechnology who is presently investigating plantibodies, “transgenic plants are currently the most productive and economical system” for making antibodies for human use13. This is true considering that not only tobacco, but also many other common plants such as corn, moss and soybeans have become hosts for antibodies and have the capacity to cure, treat or lessen the detrimental effects of multiple diseases. In light of both its numerous advantages and minimal disadvantages, it seems likely that the plantibody has the potential to be the panacea of the future.