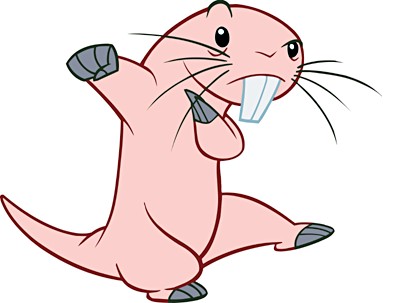 One may remember Rufus, the naked mole rat from Kim Possible – but that cute crime fighting sidekick was far from realistic.  At first sight, naked mole rats are just bags of skin with large incisors. They certainly would not win a beauty contest, but when it comes to survival of the fittest, these sand puppies come out on top.

Found in the grasslands of East Africa, they are one of two known species of eusocial mammals.  In other words, they have hive minds like ants and bees and live under the queen.  In this society, the fertile queen reproduces with a few chosen males, while the rest of the colony is comprised of workers and fighters.

Mole rats also have the ability to shut down their metabolisms if food is scarce – almost as if pausing their lives.  Because of this, they have extremely long life spans compared to other rodents their size – they can live for up to 30 years.

Eusociality and longevity are not the only things that set naked mole rats apart from all other animals – they are also resistant to cancer.

Scientists at the University of Rochester in New York have researched these creatures and can now explain why cancer has never been found in a naked mole rat.

Most mammals, like humans, have a gene, called p27, which stops or slows down the cell division cycle.  This can help stop the progression of cancer, but it usually acts too late, and most cancer cells can find a way to get around it.

The scientists at the University of Rochester have discovered that the naked mole rats’ cells contain another gene, called p16, which makes the cells “claustrophobic.”  This gene stops the reproduction of cells before it gets too crowded, preventing any uncontrolled cell growth.  Once a certain number of cells occupy a space, the cells simply refuse to replicate further.  This, in combination with the p27 gene, provides two separate defense mechanisms against cancer, effectively making the naked mole rat immune to any malignant growths.

This is a true eye opener for cancer researchers.  If the effect of the p16 gene could somehow be replicated in humans, cancer could not only be stopped in its tracks, but could be prevented entirely.