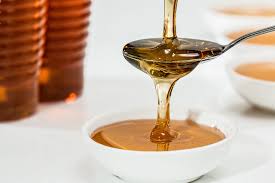 Since their discovery, antibiotics have been a major factor in modern medicine; however, they are overused, leading to a growing list of bacteria [1].  An alternative method for of bacterial infections is honey. Honey’s natural antimicrobial properties—specifically its high concentration of sugar and hydrogen peroxide, as well as its acidic pH, and the presence of polyphenols which act as antioxidants [2] —lead to it the potential for being a medicinal treatment [6].  It is known that hydrogen peroxide in honey is a product of the oxidation of glucose by glucose oxidase [6]. For the reaction to occur, however, oxygen must be available, meaning that hydrogen peroxide’s addition to antimicrobial activity is only usable in aerobic conditions.  This project aimed to determine whether honey would be an effective antimicrobial against Streptococcus and Clostridium perfringens under anaerobic conditions.  It was hypothesized that honey would be effective as an antimicrobial agent under anaerobic conditions, as the honey still maintains other antimicrobial .  Separate spot titers for each organism were performed on various honey concentrations, ranging from 0-20% (w/v), followed by colony counts. A Kruskal-Wallis analysis of variance (ANOVA) test was used to determine whether there was a statistically significant difference in the growth of each organism as the honey concentration increased.  In both cases, p > 0.05, indicating no statistically significant difference in organism growth between the honey concentrations, as when ? = (the significance level) 0.05. Other studies performed have shown the minimum inhibitory concentration (MIC) for S. aerobically on a variety of to be above 20% (w/v) [7, 9].  A study on the effectiveness of honey anaerobically against C. found the MIC to be 20% (w/v) [9].  Although different varieties of honey have different compositions and MICs, this suggests that the honey concentrations used in these trials may have been too low, and therefore, further testing should be done using higher concentrations of honey.

Since their discovery in 1928, antibiotics have had a major role in modern medicine, as they are used to prevent and treat infections.  However, they are overused, which is leading to an ever-growing list of bacteria [1].

Antibiotic resistance is the evolution of bacteria that results in weakened or eliminated effectiveness of antibiotics [3].  Antibiotic resistance can be attributed to overuse, inappropriate prescriptions, and extensive agricultural use [1]. Antibiotic resistant bacteria are a public health risk.  In the US alone each year, at minimum two million people are infected with them and twenty-three thousand people die as a result of infection [4]. With antibiotic use driving selective pressure for resistance, it is becoming important to explore alternatives to prescribed antibiotic regimens.

Preparation of the Organisms

To make agar solutions, 12.5 g of nutrient agar (Alpha Biosciences) was added to four flasks containing between 400 and 500 ml of dH2O, with dH2O volume varying based on concentration of honey to be added.  The solutions were heated until they became translucent and then autoclaved at 121°C for 30 minutes.  Once the autoclave finished, honey (Shaw Farm, Dracut, MA) was combined to the solutions to create varying honey concentrations (w/v).  Table 1 specifies the amount of honey added to dH2O to create each concentration.  The agar was then poured into sterile Petri dishes (Kord-Valmark) to solidify, and once solidified, stored in a 4°C refrigerator for later use.

A 0.5 McFarland standard was made of each , separately, in 9.9 mL sterile dH2O.  From the 0.5 McFarland standard solution, a 1:100 serial dilution was performed up-to and including 1:1010. Next, from each dilution tube, a spot titer was performed by pipetting 10 µl of each dilution tube to designated areas of the honey nutrient agar plates (0, 5, 10, and 20% [w/v] honey).  The plates were incubated anaerobically for twenty-four to forty-eight hours at 37°C. Once the incubation period had finished, colony counts were performed on plates that contained 25-250 colonies.  The CFU number was recorded. The CFU number was then divided by 0.01 and multiplied by the dilution factor to estimate the CFUs/ml (Tables 2-3).

Spot titers were performed using S. pyogenes and C. perfringens on agars with varying honey concentrations (w/v).  Table 2 contains the descriptive statistics for S. pyogenes.  The mean, standard error, standard deviation, and sample variance decrease while the honey concentration increases (Table 2).  Figure 1 shows the decrease in the mean CFUs/ml for S. pyogenes across the four different agar types, with the nutrient agar having the most growth, and the 20% (w/v) honey nutrient agar (20% Honey) having the least.

A Kruskal-Wallis analysis of variance (ANOVA) test was used to determine whether there was a statistically significant difference in the growth of each organism as the honey concentration increased.  Table 4 shows the p-values for both organisms with ? = 0.05. In both cases, p > 0.05, indicating no statistically significant difference in organism growth between the honey concentrations.

For both S. pyogenes and C. perfringens, the p-values showed that there was no statistically significant difference between the growth of the organisms on the different honey concentration agar plates, indicating that honey is ineffective under anaerobic conditions in concentrations between 0-20% (w/v) against S. pyogenes and C. perfringens.  Ineffectiveness could be attributed to multiple reasons.  The antimicrobial effectiveness of honey’s pH and osmolarity—both anaerobic antimicrobial factors—decreases as the concentration increases [6].  As the major antimicrobial factors are all diminished when dilute or not present anaerobically—osmolarity, pH, hydrogen peroxide—and bacterial growth is not prevented, the remaining factors are likely not enough to sustain an antimicrobial effect at these low concentrations (w/v).

A study by Oinaala et al. found that willow herb honey was effective anaerobically against C. perfringens; however, the minimal inhibitory concentration (MIC) of the honey used was 20% (w/v), meaning it was only more effective than the control (a sugar solution) until the concentrations of honey and sugar respectively reached 20% (w/v) [9].  Maddocks et al. found the MIC of manuka honey used aerobically against S. pyogenes to be 20% (w/v) [8], while Moussa et al. found the MIC of various honeys against S. pyogenes aerobically to be between 23-73% (w/v) [10].  Although different varieties of honey have different compositions and MICs, this suggests that the honey concentrations used in these trials may have been too low, and therefore, further testing should be done using higher concentrations of honey.

An additional limitation in this study is that serial dilutions and spot titers were used to assess the effectiveness of the honey anaerobically.  With serial dilutions, a 0.5 McFarland standard was used to visually estimate the number of bacterial within an impregnated solution by comparing the suspension to the standard [11]. Visual estimates are inherently subjective and improper determinations can therefore occur.  If an incorrect estimate of turbidity is made at the beginning of the serial dilution, subsequent serial dilutions will therefore also be incorrect, potentially creating extreme lack, or overgrowth, of colonies on the agar plates. Furthermore, after incubation, colony counts are performed on the spot titer plates.  Colony counts using spot titers are also subjective; they’re highly dependent on the light setting, eyesight, and personal determination of what is and is not a separate colony. The subjectivity of both the visualization of turbidity using the McFarland standard and the colony counts using the spot titer method explain the large variance within the data sets, therefore explaining why statistical tests failed to show significance despite an apparent reduction of growth as honey concentration increases.   Based on these observations, honey has been shown to be ineffective against S. pyogenes and C. perfringens anaerobically under concentrations of up to 20% (w/v).  Other studies show potential for higher honey concentrations to be effective, though further investigation is needed to confirm and is an area of future investigation.  Additionally, due to the inherent subjectivity of spot titers and visual examination of turbidity, alternative methods of testing are recommended for future testing.

The author thanks Professor Kimberly Gonzalez for assistance and support throughout the entire project.

An Examination of the Effectiveness of Honey as an Antimicrobial Agent against S. pyogenes and C. perfringens under Anaerobic Conditions
Download