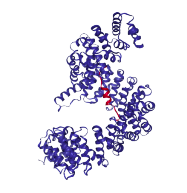 In the Fused in Sarcoma (FUS) protein, amyotrophic lateral sclerosis (ALS) linked mutations cluster in the C-terminal nuclear localization sequence (NLS), a domain that binds to transportin- 1 (TNPO1) for import of FUS into the nucleus. This project was conducted to gain a better understanding of the structural and functional effects of mutations in the NLS domain. It was hypothesized that the observed mutations would destabilize the FUS protein and inhibit important interactions between FUS and TNPO1. A structure of the FUS/TNPO1 complex was obtained from the Protein Data Bank. Twelve mutations identified in a study on the NLS domain were modeled in PyMOL and then analyzed. The stability of the mutants was determined by calculating theoretical free energy change (ddG) using the Site Directed Mutator server (SDM) and by examining Ramachandran plots created on the RAMPAGE program. Solvent accessibility percentages were obtained on SDM to determine the ligand accessible surface areas following mutation. The ddG values of seven mutants indicated decreased stability, but only two indicated such through their Ramachandran plots. Five of the mutants had reduced solvent accessibility percentages. In half of the mutants, the protein was destabilized and its interactions with TNPO1 were inhibited, possibly affecting transcription in the cell.

ALS is a neurodegenerative disorder affecting almost 30,000 individuals in the United States alone. The disease causes a deterioration of the body’s motor neurons, the nerve cells responsible for movement and coordination. [1]. Early on, symptoms such as weakness or stiffness in muscles may go unnoticed or be excused as results of age or minor illnesses. As the disease progresses, however, muscles atrophy more significantly. [2] People with ALS also experience difficulty eating, speaking, and breathing on their own, often requiring respirators in the later stages of the disease. [2]

No cure has been discovered for this disease, though two FDA-approved drugs, riluzole and edaravone, extend the patient’s life for some months. [3] Other medications may also be prescribed to ALS patients to control pain and symptoms of the disease. [3] Palliative care may also be used to alleviate patient discomfort. However, no medication exists that remedies preexisting damage or offers a permanent cure, and usually, individuals only survive three to five years after their initial diagnosis. [3]

Much is still unknown about the progression and cause of ALS. Diagnosis of the disease is especially difficult early in its progression, as its symptoms resemble many other neurodegenerative disorders. [4] Most cases of the disease (90-95%) are sporadic, showing no obvious genetic mutations in the patient’s genome. [4] Of the familial cases, twenty-nine genes have been linked to the disease, the most common being C9orf72, SOD1, TARDBP and FUS. [3]

This project investigated the FUS gene and the protein of the same name that it encodes. Features of the FUS protein include a N-terminal glutamine-glycine-serine-tyrosine rich domain, glycine-rich domain, RNA-recognition motif (RRM), zinc finger domain, C-terminal arginine- glycine-glycine (RGG)-rich domains, and a nuclear localization signaling (NLS) domain. [5] The FUS protein has many important functions in the cell, including DNA repair, transcription

regulation and RNA splicing, mRNA binding and transport from nucleus to cytoplasm, and stress response. [5]

ALS mutations have been found in the glycine-rich region of FUS and in its NLS domain. In this project, mutations in the NLS were observed in the FUS structure in complex with Transportin-1 (TNPO1). TNPO1 is a transport protein that binds to the NLS domain of FUS to aid in nuclear import of FUS, which must occur before its mRNA binding function can be carried out. [6] This project aimed to identify the effects of ALS-linked mutations in the NLS on the FUS/TNPO1 complex. It was hypothesized that NLS mutations would cause changes to the stability of FUS and negatively affect its interactions with TNPO1.

Table 1. Software and Databases Used to Complete this Project 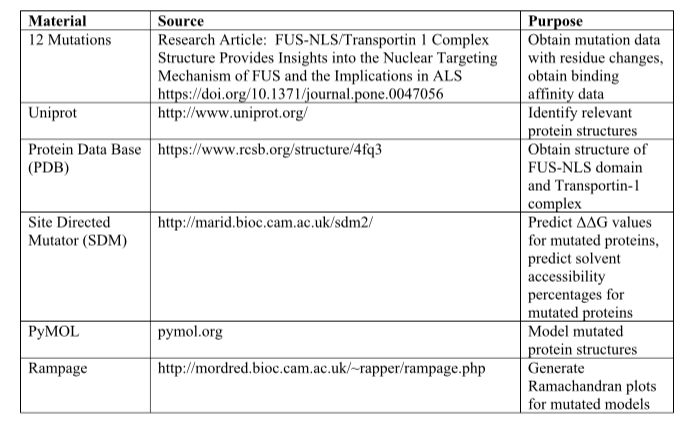 This project was conducted entirely on a computer using various protein analysis software. First, twelve ALS-linked mutations in the NLS domain of FUS were obtained from a study by researchers at the Chinese Academy of Sciences and the University of Kentucky in 2012, where the effects of said mutations on binding affinity were investigated. [6] Next, a structure of the NLS domain of FUS bound to TNPO1 (PDB ID: 4FQ3), which had been published by these same researchers, was identified using the Uniprot database and downloaded from the Protein Data Bank (PDB). [7,8]

whether a mutation causes an increase or decrease in the stability of a protein, while solvent accessibility percentages indicates what percent of the surface area of the protein is available for the ligand to bind to. The unmutated protein complex obtained from the PDB was put into the program, as well as the residue change of the mutation and the chain the mutation was on. All twelve mutations were on chain B of FUS. This information was entered into the server for each of the twelve mutations and the ddG values and solvent accessibility percentages of each were recorded. [9]

The PyMOL computer software, downloaded from pymol.org, was used to produce mutated models of the FUS/TNPO1 complex. In the program, the 4FQ3 PDB file of the complex was downloaded and the TNPO1 chains were removed, as all mutations were in the FUS protein. The Mutagenesis feature was used to manipulate the residues at the locations of the mutations. After one mutation was modified, the file was saved in PDB format. Then, the original, unmutated file was used to modify the next mutation, and so on for all twelve mutations. [10]

Once all PDB files for the mutations were produced, the RAMPAGE program, available online, was used to produce Ramachandran plots. These plots served as an indication of the stable conformation angles that existed for each residue that was mutated. First, the unmutated 4FQ3 PDB file was uploaded to produce a Ramachandran plot of a control. The program generated a list of the percentages of residues within the favored, allowed, and outlier regions of the plot. A decrease in the favored or allowed percentages indicated a decrease in the stability of the protein structure. Each mutation’s PDB file was uploaded to the program, Ramachandran plots were obtained, and the favored, allowed, and outlier percentages were recorded. [11]

The Ramachandran plots utilized the color coding key, pictured below

Below are representative Ramachandran plots for the unmutated protein, and the S513P, G515C, and R524S mutants. All other mutants not displayed had the same plots and favored, allowed, and outlier percentages as the G515C mutant. (Excepting G507D, which could not be plotted as the residue in the PDB file at location 507 was not present) 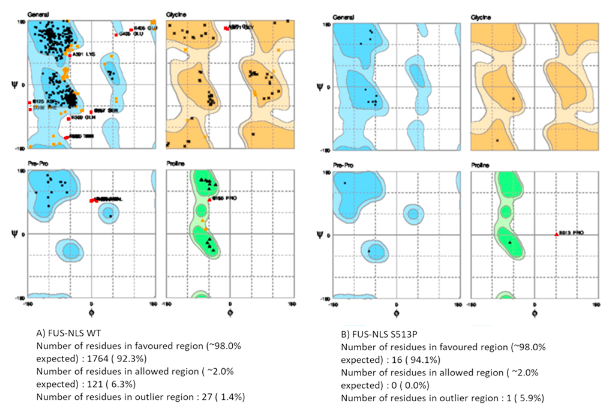 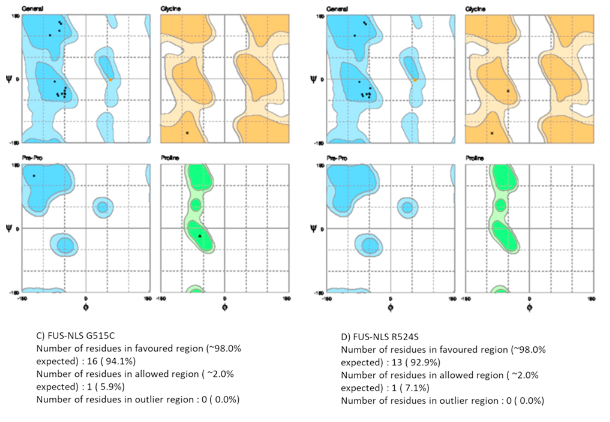 The percentage of residues in favored, allowed, and outlier regions were also produced for each plot.

Table 3. The percentages of residues in favored, allowed, and outlier regions for each of the mutations. Results could not be produced for mutation G507D as the location was not mapped in the original PDB file.

The hypothesis that NLS domain mutations would destabilize the protein and inhibit interactions with Transportin-1 was shown to be true for some, but not all the mutations that were investigated. The ddG values and the solvent accessibility percentages indicated changes in stability of the protein for seven and five mutants respectively. However, the Ramachandran plots only indicated changes in stable conformation angles for two mutants. Additionally, data could not be gathered on the G507D mutant as location 507 was not present in the 4FQ3 PDB file and as such, none of the programs could judge the effects of this mutation.

The ddG values that were produced by the Site Directed Mutator were negative if the stability of the protein decreased, and positive if it increased. Seven mutants (S513P, R524S, R518K, R521G, R514G, H517P, and R518G) had negative ddG values, indicating the protein was destabilized by those mutations. The H517P mutation resulted in the greatest change in stability (ddG = -1.67). It is unclear if people with this mutation experience earlier onset ALS or more intense symptoms. Of the mutants that decreased the protein’s stability, the R518K mutation appeared to have been modified the least, as it had a ddG value of -0.25. The remaining four mutants (G515C, K510E, R522G, and P525L) had positive ddG, indicating that these mutations caused an increase to the stability of the protein in some way. This could also yield a negative effect on the protein as an increased stability could interfere with the normal folding properties of the protein that allow it to fulfil its function.

Just under half of the mutants displayed lowered solvent accessibility percentages, indicating that the interactions between FUS and TNPO1 may be inhibited for those mutants. Five mutants S513P, R524S, R518K, H517P, and R518G had smaller surface areas open for the ligand to bind

to. Most likely, this difference in accessible area would affect the binding of TNPO1 to FUS, hindering the import of FUS into the nucleus, which would in turn disrupt the transportation of mRNA out of the nucleus. Of the mutants that had decreased accessibility percentages, H517P had the highest difference between the unmutated protein and the mutant, jumping from 67.1% solvent accessible to 47.9% solvent accessible. In conjunction with the fact that this same mutant also had the most negative ddG value, the data suggests that this mutation causes significant damage to the FUS protein’s function and interactions with TNPO1.

It should be noted that in the Ramachandran plot of the unmutated FUS/TNPO1 complex, an irregularly large number of residues were accounted for in the program, and the percentages of the favored, allowed, and outlier regions were slightly different from the majority of the mutations. It is possible an error occurred in the isolation of the FUS domain from the TNPO1 domain during manipulation of the model in PyMOL. This issue did not seem to occur in the mutated structures derived from the same isolated domain. However, the mutants were still consistent among themselves, other than the previously noted mutations which indicated changes in stability or affected protein interactions.

Because the NLS domain of FUS is vital in importing FUS into the nucleus so it can perform its regulatory functions in transcription, changes to this domain will most likely negatively affect this interaction. These three mutants appeared to have a significant effect on FUS stability and interaction with TNPO1, and it is likely that they also contribute to development of ALS through their destructive effects on FUS. Interpreting and understanding the negative effects of such mutations on FUS may be useful in future gene therapy treatments when targeting domains of the protein that cause ALS. Future extensions of this project could include analyzing patient data and identifying whether these mutations are more prevalent in certain groups, such as those of the same age, gender, etc, to further research what the mutations are targeting or have in common. Additionally, if similarities were identified between people with these mutations, personalized medical treatments could be developed that aim to remedy the changed stabilities or affected interactions caused by the mutants.

I would like to thank Ms. Siobhan Curran, my STEM project advisor and STEM teacher, for help with biological concepts and consistent guidance throughout this project and Ms. Meghan Franklin for her instruction in using PyMOL and advice on statistical data relevant to the project.