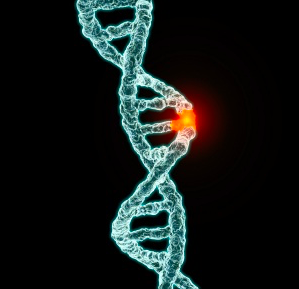 The single point mutation of KIT D816V is the common genetic mutation of Systemic Mastocytosis (SM) and other cancers such as Acute Myelogenous Leukemia (AML) and gastrointestinal stromal tumors. Real-time allele–specific relative quantification is a common technique for detecting mutant allele vs. wild-type allele despite having well-known limitations. Examples of limitations include an inability to perform absolute quantification and a lower sensitivity in reference to having a >1% sensitivity. However, digital PCR (dPCR) technology, with its natural absolute quantification and high precision, has a great advantage in mutation allele quantification. In this study, KIT D816V absolute quantification was evaluated by using a chip-based digital PCR system. Due to the absolute quantification embedded within the dPCR technology, the analytic sensitivity and linearity test can more easily be applied as quality testing methods using double-stranded gblock oligos. The digital PCR assay produced a high sensitivity with about 4log of dynamic ranges with 0.01% limit of detection (LOD) which is generally low enough for the detection of most patients exhibiting the mutation. Samples from six SM patients were used to perform this single-tube digital PCR, and the percentage of mutant allele was detected with higher sensitivity using dPCR than the Sanger sequencing assay. Six healthy donor patients with the wild-type KIT D816V allele were used to conduct the specificity study. 5 out of 6 were negative and 1 out of 6 showed a very low positive result due to either hypersensitivity using dPCR or a false calculation from Poisson distribution model in the software. A reproducibility test was run 3 times for 3 patients: high mutant allele, low mutant allele, and no mutation allele. Results were reasonably close with standard deviations (SD) of 0.09, 1.28, and 0.00, respectively. These SD values support the high reproducibility and precision of the dPCR assay. Therefore, a chip based digital PCR assay can be used to evaluate KIT D816V allele burden and monitor minimal residual disease (MRD) for target therapies.

KIT is a receptor tyrosine kinase that cascades a phosphorylation signal from the cell membrane into the cytoplasm. KIT signaling pathways play roles in many important cellular processes, such as cell proliferation, growth, and survival (Edling 2007). KIT gene mutations are associated with many key events of hematological cancers. One of the important KIT mutations is D816V (c.2447 A to T), which is a single-nucleotide polymorphism related to 90% of Systemic Mastocytosis (SM) cases and 30% of core-binding factor acute myeloid leukemia (CBF-AML) cases (Cairoli 2006). According to the WHO 2008 classification of myeloproliferative neoplasms, the presence of KIT D816V is one of the minor diagnosis criteria (Swerdlow 2008). D816V allele burden also correlates with the stages, and therefore treatment, of SM (Pardanni 2010). One of the most common methods to treat SM is using imatinib; however, some patient cases can become imatinib-resistant. As a potential solution, the FDA recently approved a new kinase inhibitor Rydapt (midostaurin)—an oral multi-kinase inhibitor for treatment of patients with advanced subtypes of SM such as aggressive systemic mastocytosis (ASM), SM with an associated hematologic neoplasm (SM-AHN), and mast cell leukemia (MCL) (Jawhar 2017; Kim 2017). Therefore, the detection of D816V is important not only for diagnosis, but also for the appropriate selection of different kinds of inhibitors once the SM becomes imatinib-resistant (Ustun 2011).

There are many methods used in clinical laboratories for D816V mutation detection, such as Sanger sequencing, allele specific PCR, RQ-PCR, etc. Digital PCR technology has recently been introduced into clinical laboratories (Lawrence 2014). To explore chip based digital PCR technology and to apply a quantitative detection of the D816V mutation, the analytical sensitivity and linearity, patient validation, and specificity and reproducibility experiments were performed. Chip based digital PCR was sourced from Thermo Fisher Scientific (Thermo Fisher Scientific, Grand Island, NY 14072 USA), termed Quantstudio 3D system. It has 20,000 partition wells for PCR reactions to increase assay sensitivity and specificity. Data was calculated using the Poisson distribution model (Thermo 2016).

Design of primers and probes

In each digital PCR reaction, 1µl of 40 ng/µl genomic DNA was used and if it was a gblock oligo, the input was 1µl of 1aM of gblock oligo. In the total 20 µl of reaction, there were 8.5 µl of molecular grade water, 10 µl of 2X digital PCR Master Mix buffer from Thermo Fisher Scientific, 0.5 µl of 40X primer and probe, and 1µl of template. The procedures were performed according to the Quantstudio 3D digital PCR system guide from Thermo Fisher Scientific. In brief, the chip was placed on the 40°C heat plate for 5 minutes, and at the same time the reaction mix was incubated at room temperature for 10 minutes. 15 µl of reaction mix was loaded into the sample loading blade. The sample loading blade was held at a 70-80° angle and was dragged on the chip. The chip was processed for 20 seconds after loading the sample. Then, the chip was covered with the case lid, filled with immersion fluid, and sealed using the chip sealant with an UV stylus treatment for 30 seconds. The chip was loaded on the flat block GeneAMP 9700 PCR instrument with the cycle condition: 96°C for 10 minutes, 40 cycles of 98°C for 30 seconds, 60°C for 2 minutes, and 10°C for final resting temperature. After PCR, the chip was inserted into the Quantstudio 3D instrument for image analysis and the data was transferred to a USB drive. The data analysis was done through the Quantstudio 3D analysisSuite software.

Wild type and mutant template gblock oligos at 1 aM concentration were used to perform a mixing experiment and produce a series of KIT D816V mutation percentage dilutions from 100%, 10%, 1%, 0.1%, 0.01%, and 0.001% mutation.  HMC-1.2 cell line DNA (40 ng/µl) which harbor heterozygous D816V mutation was diluted into D816V negative cell line HL-60 DNA with equal concentration. These included 100%, 80%, 50%, 30%, 10%, 1%, 0.1%, 0.01%, and 0.001% mutation dilution points. DPCR was performed on both series dilution from gblock oligos and cell line DNAs. The expected mutation percentage and dPCR quantitative mutation percentage were compared. The linearity and sensitivity were calculated based on these comparisons.

Six SM patient samples with 40 ng of DNA input were used to perform digital PCR to detect KIT D816V. The percentage of the mutation from digital PCR was compared to Sanger sequencing results. The specificity test used six normal donor samples without any KIT D816V mutation to conduct the digital PCR assay. 3 samples from SM patients were chosen to run digital PCR for three times. The results were evaluated for reproducibility.

Figure 1 shows a typical KIT D816V digital PCR result. The left side produced the chip image and right side produced each reaction well plot. Both gblock oligo and HMC 1.2 cell line digital PCR results are shown in Table 2. Gblock mutant oligo dilution with wild type gblock oligo correlated well between expected and experimental results. According to Figure 2, gblock dilution linearity was R2=0.9559. However, at the level of 0.01% dilution, the experimental result is 0.047%, which is about a  difference. At the 0.001% level dilution, the experimental result is 0.018% ,which is almost one away from the expected percentage. Similar to the gblock oligo dilution, the HMC 1.2 cell line DNA dilution has linearity of R2=0.953, which is less than gblock dilution linearity R2 value. The last two dilutions also showed a big difference between expected percentage and experimental percentage—0.005% vs. 0.0281% and 0.0005% vs. 0.0104%. 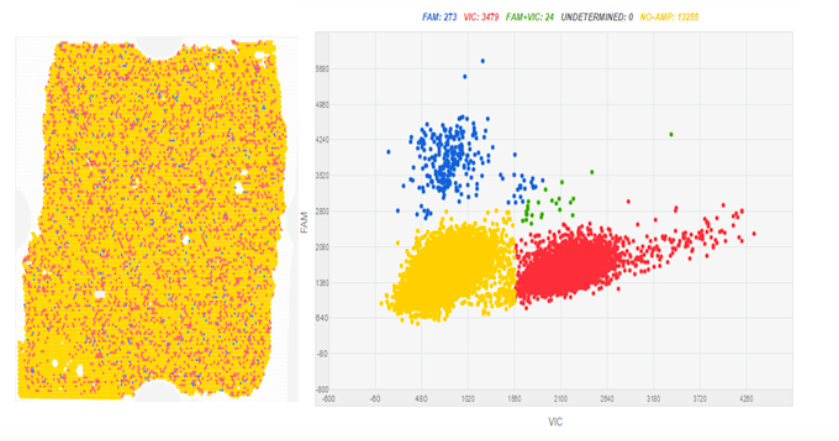 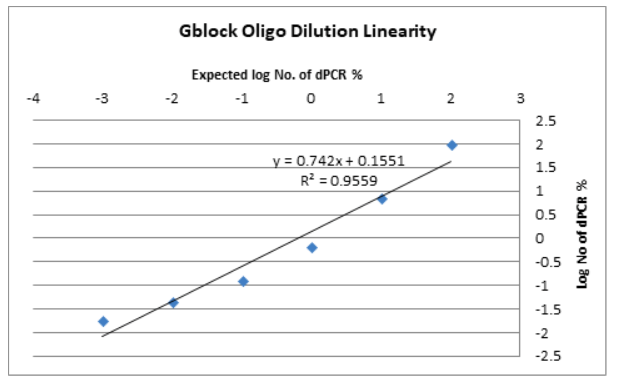 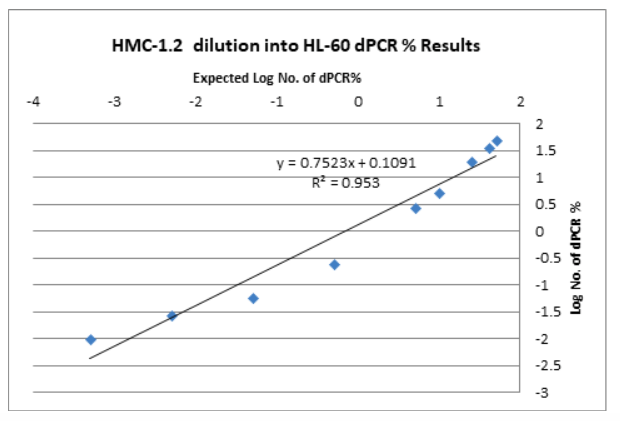 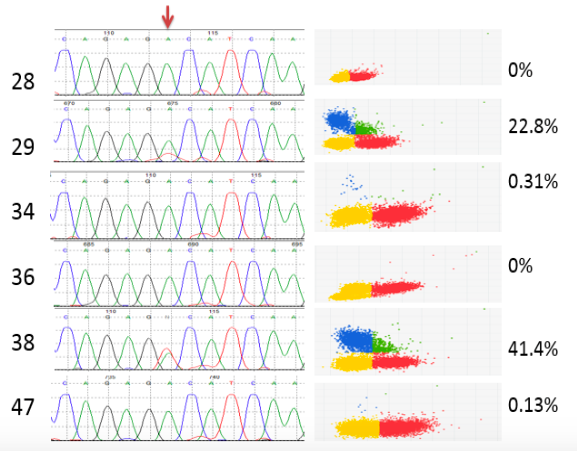 Digital PCR characterized by high sensitivity and reproducibility has been rapidly adopted in clinical laboratory settings (Thermo 2016). There are two major digital PCR platforms: droplet digital PCR, such as Bio-Rad QX-200 system (ddPCR), and microchip based digital PCR (cdPCR), such as the Thermo Fisher Quantstudio 3D digital PCR system. Both platforms can achieve similar results in the detection of rare gene mutations (Huggett 2015). In 2018, the Hoermann group adopted ddPCR system to detect KIT D816V mutation with 0.01% sensitivity (Greiner 2018). To compare ddPCR with cdPCR, the chip based digital PCR system was used to detect KIT D816V mutation. Based on both the gblock oligo and the HMC 1.2 cell line dilution, the limit of detection is beyond 0.01%. Specifically, when the theoretical percentage is lower than 0.01%, the experimental percentage results are less accurate (Table 2). For example, at a 0.001% expected mutation value, the experimental result is 0.018%. The difference is that the percentage ratios at the 0.1% level are much smaller compared to the ratios at the 0.001% level. Discordance between the expected and experimental value within the 0.001% level may indicate a misrepresentation of mutation percentage, or the undetectable nature of the sample. In order to detect samples at the 0.001% level, an increased number of PCR wells, specifically on the order of 100,000 wells, are needed for a high-sensitive digital PCR. Since this chip only has 20,000 wells, the sensitivity detection at the 0.01% level indicates the presence of 1 positive well in every 10,000 wells. From these points, the cdPCR KIT D816V detection sensitivity or detection LOD is at 0.01%. This result is very similar to ddPCR limit of detection.

The specificity test of cdPCR was performed using normal donor DNA. Although normal donor DNAs do not carry the D816V mutation, there is one case that showed a very low detection for positive D816V mutation. Since it was well below the limit of detection at 0.01%, it was considered negative. The false detection of the mutation may be caused by a cdPCR reaction hypersensitivity or a digital PCR calculation error based upon Poisson distribution.

According to this study, digital PCR has excellent inter-run reproducibility. Both low and high positive samples have low standard deviation and CV% (< 30%). This reproducibility cannot be achieved using real-time PCR, which is around ½ log of precision.

Overall, the KIT D816V mutation detection using a 20,000 reaction well chip-based digital PCR had a very high sensitivity, linearity, and precision. Limit of detection of this assay is around 0.01%, which is similar to the droplet-based digital PCR system. This 0.01% LOD can be used as a tool for minimal residual disease (MRD) assays. To further extend LOD of cdPCR to 0.001% or lower, a higher density chip containing an increased number of wells to 100,000 or 1,000,000 wells is necessary.

Pardanani A, Tefferi A: A critical reappraisal of treatment response criteria in systemic mastocytosis and a proposal for revisions. Eur J Haematol 2010, 84:371–378.