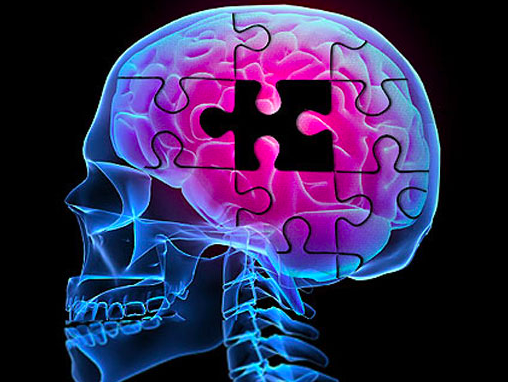 Alzheimer’s is a neurodegenerative disease characterized by the formation of extracellular amyloid-beta (abeta or AB) plaques and intracellular tau plaques. This experiment explores whether the presence of normal tau-441 protein augments AB-42 aggregation. The concentration at which each protein self-aggregated was identified by creating aggregation curves. A control and experimental aliquot of AB/buffer and AB/tau respectively were then scanned at regular intervals to determine the rate amount of aggregation in each. The conclusion is that tau moderately augments AB aggregation, possibly by stabilizing the developing plaque.

Alzheimer’s Disease is a neurodegenerative disease that progressively destroys regions of the brain, including those responsible for motor and memory skills. It is the leading cause of dementia among adults above sixty years old and the sixth leading cause of death in the United States. Scientists are investigating Alzheimer’s underlying molecular mechanisms to produce effective treatments. Of particular interest are the pathways of tau and AB protein, each of which contributes to the brain’s overall degeneration.

This experiment simulates direct tau-AB interaction prior to apoptosis, or programmed cell death. In vivo, such an interaction that could result after cytotoxic (“toxic to living cells”) AB oligomers puncture through the cell membrane and allow cytoplasmic exchange across the extracellular matrix. The aggregation rate of tau-induced AB is compared to that of AB in a control aliquot.

Alzheimer’s Disease is characterized by the formation of intracellular tau protein neurofibrillary tangles (NFTs) and extracellular amyloid-beta (AB) plaques. Both are “clumps” of misfolded protein. The formation pathway of each is described as follows.

AB monomers are formed outside of the cell from the cleavage of Amyloid precursor protein (APP). AB monomers may join together as oligomers. An oligomer is a polymer that has comparatively few repeating units. It can punch holes in the cell membranes of neurons5 and lead to synaptic failure. AB oligomers are the precursor to AB fibrils, which form aggregated AB plaques. Traditional research in Alzheimer’s has been largely based on the premise that AB plaques are responsible for dementia in clinical patients. Some studies, however, show that there is a poor correlation between the two. Some speculate that AB plaques may even protect the brain by limiting the existence of cytotoxic AB oligomers, which can punch holes in the cell membrane.5 Put another way, aggregated AB is more toxic in oligomeric form than in fibrillar form.

Tau is a microtubule-stabilizing protein. Tau NFTs are thought to form as a result of hyperphosphorylation, one of the signaling mechanisms used by the cell to regulate mitosis. The aggregation of tau fibrils within neuronal bodies eventually bursts the cell membrane. An extracellular “ghost tangle” remains, attached to a plaque with tau protein fragments. The tau hypothesis states that tau, rather than AB, is responsible for the onset of Alzheimer’s as NFTs consume normal tau and spread to other neurons. Tau tangles may appear twenty years in advance of clinical symptoms.

In summary, tau NFTs are intracellular and created by hyperphosphorylation. AB plaques are extracellular and created by aggregation. The puncturing of the cell membrane due to AB oligomers provides a means for NFTs and plaques to interact directly. Past in vitro experiments have shown that direct interaction between AB and tau induces tau aggregation and hyperphosphorylation and AB disassembly.

This experiment investigates how the presence of tau affects AB aggregation by comparing aggregation rates in an experimental tau-AB aliquot, a control AB aliquot, and positive and negative controls. It is hypothesized that the addition of tau will increase AB aggregation as measured through fluorescence microscopy.

A trial run was first performed on the plate reader to ensure it was functioning properly using 50 µL aliquots of stock fluorescent dye. The microplate reader observed negligible signals as expected due to the lack of an analyte.

The Proteostat Detection Reagent functions by binding to a protein or other sample. A microplate reader can then excite the analyte at a specific wavelength causing it to fluoresce. The light emitted from the analyte is collected and measured by the microplate reader to identify the amount of aggregation present. A stock of 200 µM loading solution was created with Detection Reagent and 1X buffer to be aliquoted as needed.

The positive and negative controls provided in the Proteostat aggregation assay kit were scanned at stepwise concentrations to create a base aggregation curve, in which fluorescence increases with protein aggregation. Ten 40 µM aliquots of each control were created and serially diluted to achieve a range of aliquots from 40 µM to 0.078 µM. While the negative control expressed negligible aggregation, the positive control curve was used as a quantitative reference for tau and AB solutions. 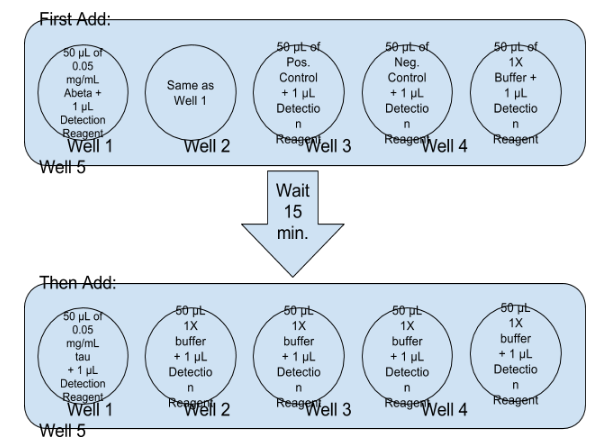 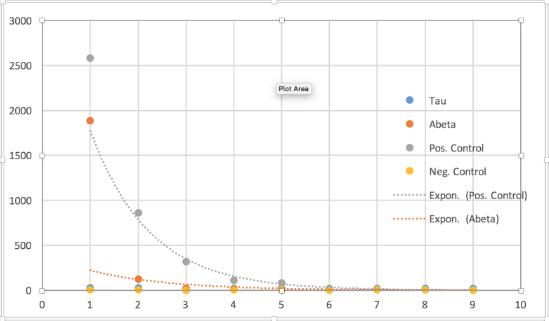 Note: Concentration starts at 2 µM in Well 1 and decreases by a factor of 2 for each well 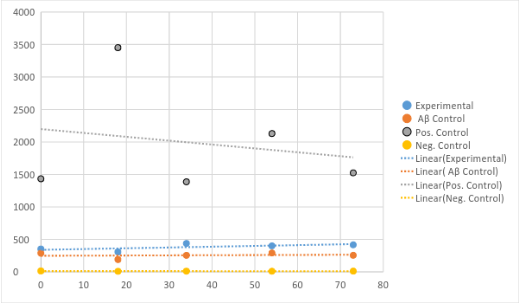 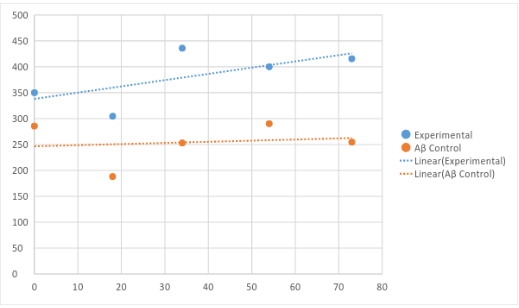 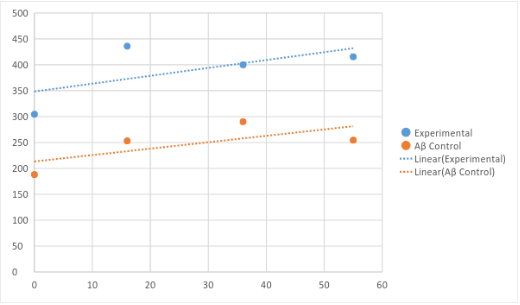 This experiment was only performed once due to limited materials, making the stated analysis explicitly preliminary. Additional trials must be conducted to determine if the results are statistically significant and replicable.

Figure 1 denotes the change in aggregation as concentration decreases for AB. Between 0.05 and 0.025 mg/mL the RFU reading falls from 596 to 172, a ratio of 3.46—the largest contrast compared to other consecutive RFU readings. For the purposes of this experiment, 0.05 mg/mL was adopted as the concentration at which AB self-aggregates.

Interestingly, both the experimental and AB control aliquots remained well below the 596-RFU benchmark for AB self-aggregation. Possible explanations are that the AB dissociated during incubation or that the benchmark was not reflective of the true critical concentration. Interestingly, the positive control aliquot in Figure 4 exhibited extreme variation, jumping from 1432.5 to 3452 to 1385 RFUs in the first three points. The most plausible explanation is that excess, unaggregated lyzozyme was present.

The second data point in Figure 5 takes place shortly after the respective addition of tau and buffer to the experimental and control aliquots. A dip is present due to temporary dissociation of the AB. At this point the tau’s presence will have marginally elevated the experimental aliquot’s baseline reading. Ideally, an inert substance with the same molar mass as tau should have replaced buffer in the AB control aliquot to control for mass.

It is also possible that the tau helped to stabilize the AB after dissociation. AB fibrils are cylindrical in structure, but AB oligomers incorporate stacks of beta sheets. AB beta sheets are likely to contain residues such as Pro at the edges to minimize chances of self-aggregation.15 Tau helps to stabilize microtubules by binding to residues between heterodimers, proteins made up of two different polypeptide chains that have similar but unidentical subunits. Tau could also serve a similar anchor function for AB oligomers. The temporary dissociation of AB might have exposed adequate surface area for the tau to begin a disaggregation feedback loop. As the tau continued to aggregate and less undistorted tau remained, the feedback loop would have plateaued. Succeeding aggregation would then result from whatever AB remained, unless the aggregated tau and AB dissociate and repeat the cycle on a lesser scale.

The experimental aliquot’s measurements were shown to be consistently higher than that of the AB control aliquot (Figures 4, 5, 6). Yet the initial range of aggregation displayed by the experimental aliquot falls largely within the error bound for the AB control. Additional trials should have taken place to more accurately confirm how the two aggregation rates compare. Scanning was also conducted at uneven and infrequent increments, which decreased the likelihood of obtaining data that accurately reflected the changes in each aliquot.

Future studies are needed to determine the nature of in vivo interaction between AB and tau preceding plaque and tangle formation, as well as the conformational changes induced in both proteins. Hyperphosphorylation of tau occurs shortly before apoptosis, further highlighting the need to consider interactions between different versions of AB and tau. Another potential study is to introduce tau to AB in vitro after different time periods and observe what conformational changes take place. Many drug companies are focused on inhibiting the cytotoxic AB fibrillization process as a potential treatment for Alzheimer’s. Tau could play a major role in the search for an effective inhibition strategy due to its central role in Alzheimer’s, indirect influence on AB plaque formation and ability to inhibit AB aggregation at the cost of self-aggregation.13 A setup involving in vivo analysis of the neuron after it has been punctured by AB oligomers could identify other candidates that promote AB and tau aggregation. There is also the question of whether tau functions as a stabilizing molecule for AB at any point in its pathology, and how such a role contributes to the overall onset of Alzheimer’s. One might also investigate whether tau’s ability to stabilize AB can lead to cycles of AB aggregation and disassembly.

I would like to thank Dr. John Coller and Dr. Vanita of the Stanford Functional Genomics Facility and Dr. Kashif Ahmad of Northwestern Health Sciences University for their invaluable help in planning and conducting the experiment. My gratitude also goes to Ms. Jennifer Norman and Ms. Barbara Monks of Enzo Life Sciences for their generous support and guidance. I am also grateful to Johns Hopkins University for giving me the opportunity to conduct this experiment as part of its Cogito Research Awards program. Finally, I would like to thank my family for their wholehearted encouragement throughout the duration of this project.

Bio Statement
Brent is a rising senior at Gunn High School in Palo Alto, California. He enjoys running, writing, and playing the clarinet. His scientific interests are centered around neuroscience and extraterrestrial life.