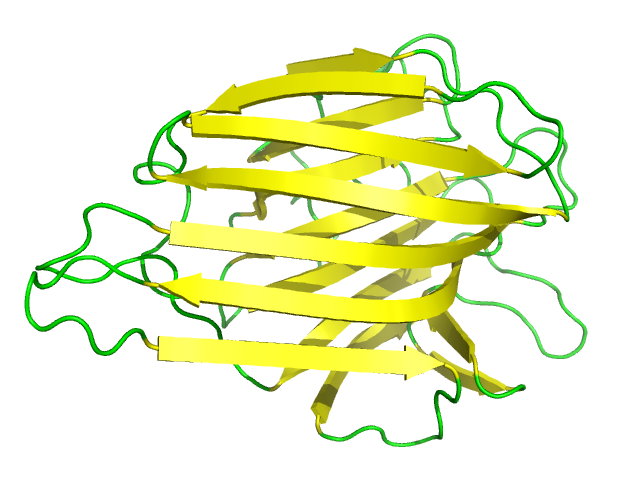 Thumbnail image: Structure of Concanavalin A

This research is focused on finding an effective inhibitor of human Meprin A, which may have therapeutic potential. Meprin A is known to be inhibited by ethylene diamine tetraacetate (EDTA) and actinonine1, confirming that substances that bind to the active site or to zinc are candidate inhibitors. Meprin also has numerous sugar molecules along its protein backbone2, leading to the proposition that chemicals binding to sugars may inhibit Meprin. Here it is shown that lectins (sugar-binding proteins) from Sambucus bark and red kidney beans do not inhibit Meprin, but Concanavalin A reduced Meprin activity by half.  To test compounds that display better safety profiles in animal toxicity tests than Concanavalin A, we choose three additional compounds to test, including E-64 (L-transepoxysuccinyl – leucylamido- [4 -guanidino] butane),  dichloro-iso-coumarin and Brefeldin.  Of these 3 compounds tested only Brefeldin achieved 50% or above inhibition of Meprin under the test conditions, and deserves further testing in animal disease models were meprin overexpression is suspected as a contributing factor. A suitable model to test this would be in rats that have experimental diabetes and renal damage. In this model it has been shown that the levels of meprin are almost three-fold higher in the kidneys, and it is thought that this overexpression of meprin contributes to the nephrotoxicity seen in these diabetic animals3.

The metalloprotease Meprin A, is a large protein that is formed by dimeric subunits binding together to form large complexes (see Figure 1).  It attaches to cell membranes at its carboxy-terminus and its MAM subunit contains multiple mannose sugar residues (Figure 1).  Homomeric Meprin A is only composed of Meprin alpha subunits in contrast to other forms of meprin such as heteromeric Meprin A, which is composed of Meprin alpha and Meprin beta subunits, and Meprin B which is composed only of Meprin beta subunits. Unlike heteromeric Meprin A, homomeric Meprin A is released from the cell and is found in the body fluids, as well as in urine and the intestines.

Meprin A is produced in the kidney, intestinal lining, and white blood cells. Meprin A degrades cartilage and gelatin, and has been found to play a role in diseases such as inflammatory bowel disease, urinary tract infections and acute renal failure1,3. Therefore an effective inhibitor for Meprin A might have therapeutic potential.

The rationale for testing these compounds was as follows: two of the compounds (EDTA and actinonine) are known inhibitors of Meprin and served as positive controls. Three sugar-binding lectins were tested including Concanavalin A, Red Kidney bean lectin and Sambucus bark lectin inspired by the 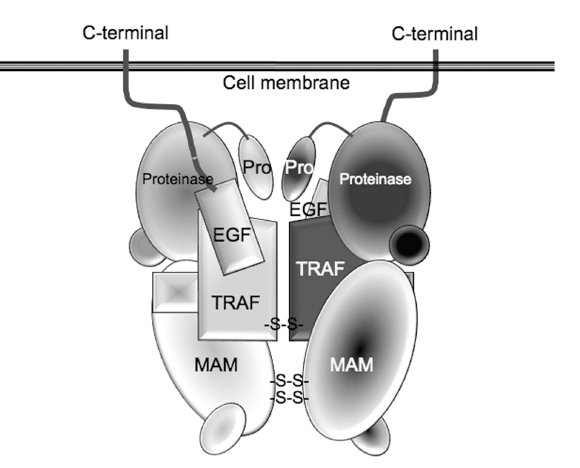 Diagram 1   The Meprin A Complex.    Shown is the dimer structure of two Meprin subunits binding to the cell membrane at the C-terminal of the subunit.  The relevant subunits to the current study include the proteinase subunit which is the catalytic site of the enzyme and the MAM subunit which contains lectin-binding sites.

thought that they might restrict Meprin A activity by binding to mannose residues. Dichloro-iso-coumarin and L-transepoxysuccinyl – leucylamido- [4 – guanidino] butane (E 64) were tested due to previous studies demonstrating these compounds inhibiting serine and cysteine proteases, respectively45. Brefeldin A, an antibiotic which is isolated from yeast and is known to cause a disruption of intracellular microfilaments thereby impairing enzyme secretion,6 was tested to see if it could also inhibit Meprin enzymatic activity.

The following is a list of chemicals, reagents and enzymes that were utilized in the enzyme assays reported in this study. The vendors who supplied the materials are also listed.

The homomeric mouse Meprin A was provided by Timothy Keiffer (Penn State Hershey Medical Center). The enzyme was produced, harvested, and purified from human embryonic kidney (HEK 293) cells. The stock latent enzyme was stored at -20° C until needed. At the start of each enzyme assay, Meprin was activated by trypsin, which cleaves off a peptide at the amino-terminal end of the enzyme molecule leading to full activation¹.

The procedure for assaying Meprin A relies on the release of azo dye bound to casein7. First, a small amount (25 uL) of pH 8.5 ethanolamine buffer is put into Eppendorf tubes to facilitate the mixing of later additions. A constant amount of activated Meprin A is then added to the Eppendorf tube. More buffer or test material is then added to bring the volume to 125 uL. Then 125 uL of azocasein substrate is added. The reaction mixtures are incubated for 1 hour at 37°C. Next, 1000 uL of 5% trichloroacetic acid is added to precipitate the protein. The reaction mixtures are then centrifuged for 5 min at 5000 rpm to sediment the protein. The clear fluid is then put into cuvettes. The absorbency of the clear fluid at 340nm is measured using a spectrophotometer.

The procedure for detecting inhibition of Meprin A activity includes a series that consists of a blank with no enzyme or test material, a positive control with enzyme but no test material, and varying amounts of potential inhibitor with enzyme. Meprin activity is determined by measuring the release of azo dye from azocasein. The chemicals tested included: actinonine, EDTA, concanavalin A, dichloro-iso-coumarin, L-transepoxysuccinyl – leucylamido- [4 – guanidino] butane (E64), dicyclohexylcarbodiimide, Sambucus bark lectin, red kidney bean lectin, and brefeldin a. The data are then graphed and the inhibitory responses interpreted.

A panel of chemicals was tested for their ability to inhibit Meprin A’s digestion of the protein, azocasein. To confirm the reliability of the experimental design, two known inhibitors of Meprin A, actinonine and EDTA, were tested for inhibitory activity. Indeed, 5 uM actinonine and 25uMEDTA reduced release of the azocasein dye by 50% as shown in Figures 1 and 2 below. 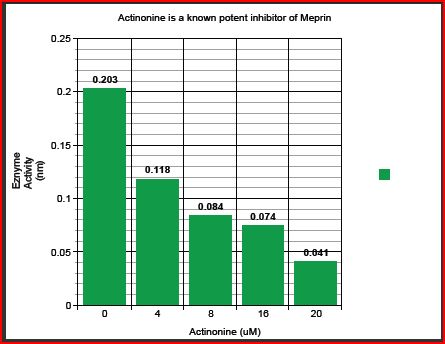 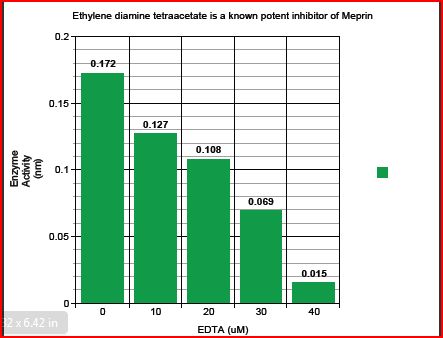 It has been reported in the literature that mannan-binding protein inhibits Meprin activity2. In the present study we tested three different sugar binding proteins including Concanavalin A, Sambucus Bark Lectin, and Red Kidney Bean phaseolin lectin. Of these, only Concanavalin A at 20uM resulted in a 50% reduction of digestion of azocasein by Meprin A  and this data is shown in Figures 3, 4, and 5 below. 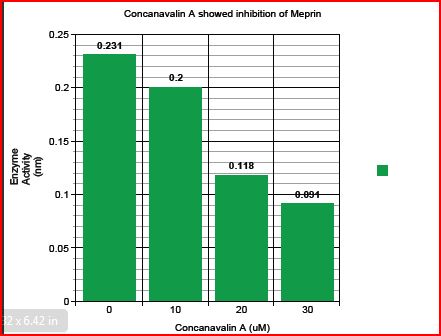 Figure 3: The lectin, Concanavalin A, is an effective inhibitor of Meprin 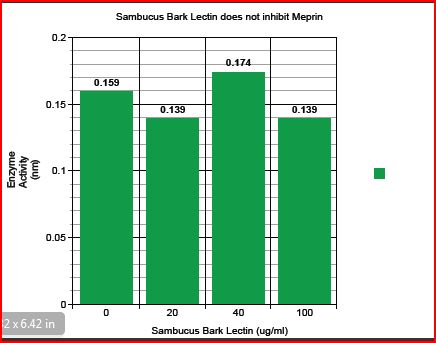 Figure 4: The lectin from Sambucus bark is not an effective inhibitor of Meprin 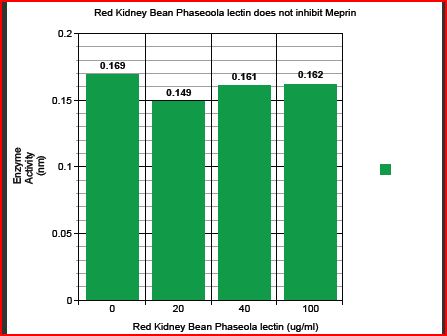 Figure 5:  The lectin from red kidney beans is not an effective inhibitor of Meprin

From the above enzyme assays, we were able to identify that Concanavalin A was a novel inhibitor of Meprin. However, this molecule has shown toxic effects in animal experiments that would limit its usefulness as a therapeutic agent8.  In an attempt to identify other novel inhibitors of Meprin activity that may have therapeutic potential, other protease inhibitors that had better safety profiles in animal toxicity studies8 were tested including dichloro-iso-coumarin,  E64 and brefeldin.

The first two compounds tested, dichloro-iso-coumarin and E64 showed limited inhibition of Meprin A activity even at very high concentrations (465uM and above) as shown in Figures 6 and 7. 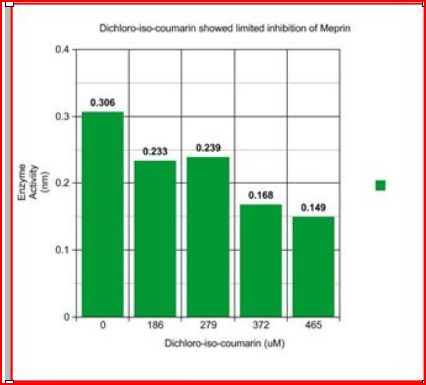 Brefeldin A, a known inhibitor of Meprin secretion6, was confirmed to inhibit Meprin A proteolytic activity at 80uM as seen in Figure 9 below. 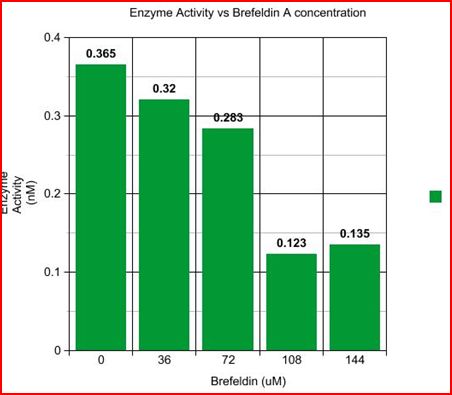 Three lectins having different sugar-binding preferences were tested for their ability to inhibit the enzyme, Meprin A. Concanavalin selectively bind to mannan residues, while Sambucus Bark lectin binds to N-acetyl-D-glucosamine and Red Kidney Bean Phaseolin lectin binds to glycosyl side chains910. Indeed, mannose residues are more abundant on the meprin backbone than N-acetyl-D-glucosamine and galactose residues. It would appear that attachment of lectins to the mannose residues on Meprin molecules impedes proteolysis by altering access of the azocasein substrate to the active site. It is noteworthy that inhibition of meprin’s proteolytic activity tapered off as concanavalin A concentration increased, consistent with the proposition that the large molecule is meshing rather than inhibiting the enzyme. Dichloro-iso-coumarin and E64 are serine and cysteine proteases, respectively4,5, confirming the general specificity of these inhibitors. Brefeldin causes a disruption of intracellular microfilaments6 and thereby impairs secretion of the pro-enzyme. It is not clear how this related to inhibition of proteolysis that we demonstrated in the present study.

Experimental errors include the tendency of Meprin to deteriorate during storage at 5° C thus varying its control activity. Further experiments would concentrate on testing the specificity of the chemicals used in this study to act on other specific zinc metalloproteases. In addition, tests on mice would have to be conducted to study the therapeutic potential and hazards of the chemicals, especially brefeldin A.  As mentioned earlier, a suitable model to test this would be in diabetic rats where levels of meprin are significantly elevated in the kidneys, which is thought to contribute to renal failure seen in these animals3.