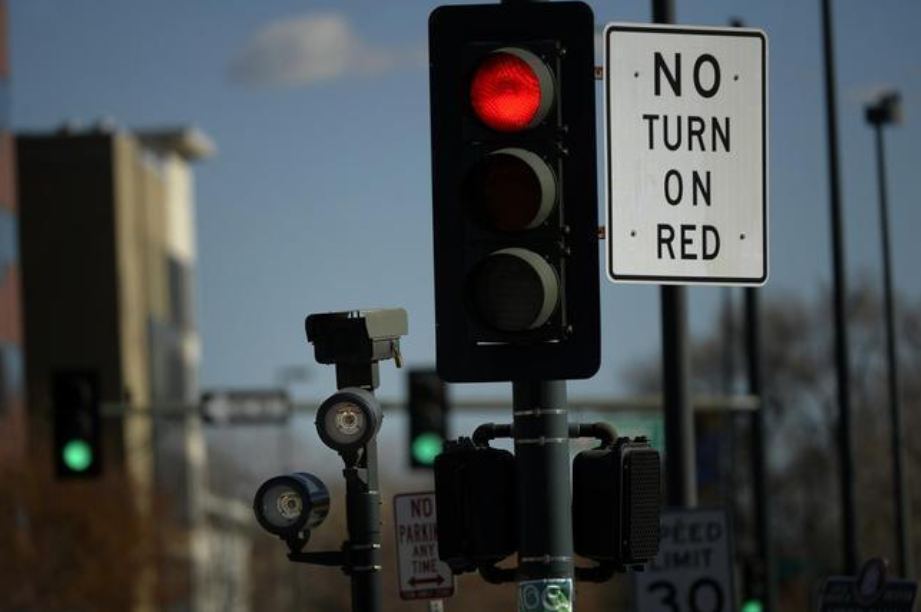 Traffic enforcement cameras, also known as red light cameras or road safety cameras, are devices installed on roads (particularly at intersections) or in enforcement vehicles to detect traffic regulation violations, such as speeding and red light violations. They are usually linked to an automated ticketing system that works in tandem with the latest automatic number plate recognition system.

For this research paper, we used data science to evaluate the factors causing traffic regulation violations by using Spearman rank-order correlation, so that traffic enforcement cameras can be placed appropriately thus ensuring more focused efforts for crime management and control.

Data science is an interdisciplinary field concerning processes and systems. It employs techniques and theories drawn from many fields including mathematics, statistics, operations research, information science, and computer science to extract insights from data.

My objective was to utilize data science to analyze crime & traffic patterns and develop innovative solutions for managing them. In this project, we asked the following questions:

We will arrive at the answers to these questions by employing different methods and tools of data science on real world data that is relevant and accessible.

To carry out this activity, we will use a collection of data from the Chicago Police Department regarding the occurrence of traffic violations and various crimes throughout the city of Chicago.

We will transfer this data to Microsoft Excel (as depicted in Figures 3 and 4) so that we can then use the statistical software, ‘R’, to process our data, derive insights and arrive at conclusions that answer the questions we have proposed to the extent possible.

We have data for the red light violations in the City of Chicago from July 2014 to August 2016 (https://data.cityofchicago.org/Transportation/Red-Light-Camera-Violations/spqx-js37) as shown in Figure 1. The key elements in this data set are: 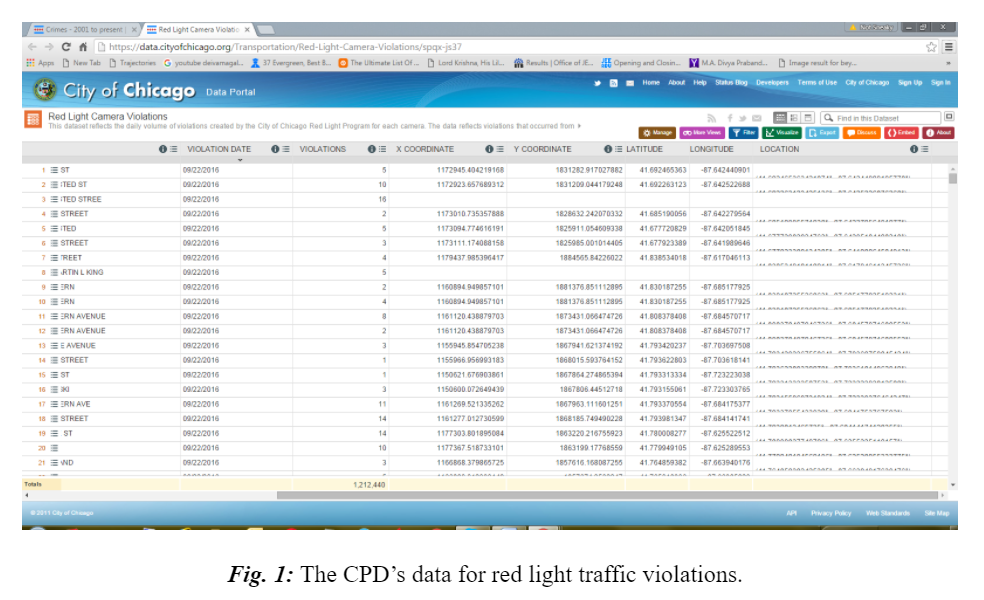 We also have crime data for the City of Chicago for the years of 2014 and 2015 (https://data.cityofchicago.org/Public-Safety/Crimes-2001-to-present/ijzp-q8t2) as shown in Figure 2. The key elements in this data set are: 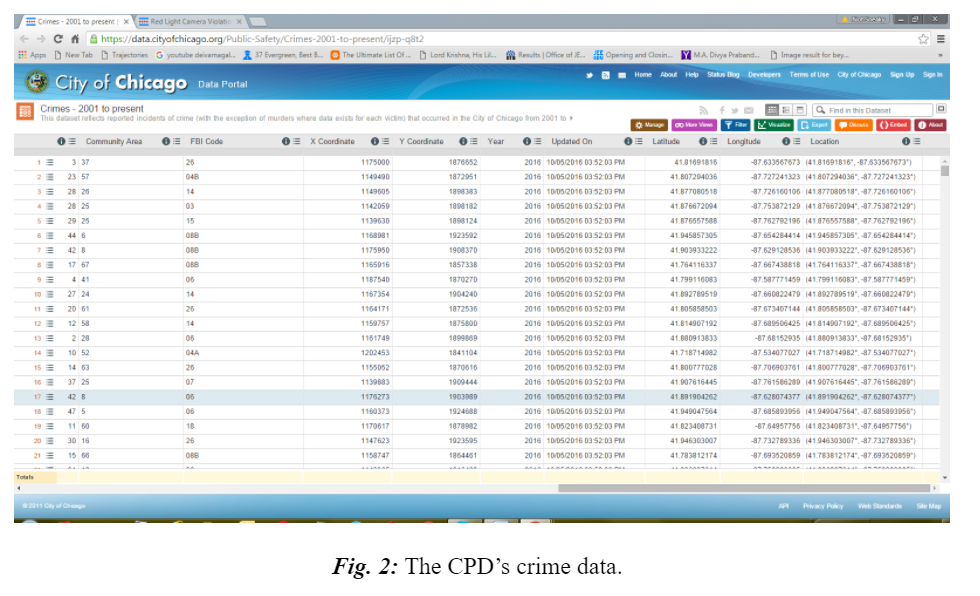 The key linkage between the two files was location by latitude and longitude which we mapped into zip codes by using the rgdal library in ‘R’.  Since the year of 2015 is common to the time frames of both data sets, we focused on the red light violations and crimes that occurred only in the year of 2015. So to make the data more convenient to analyze, we first removed all the records for red light violations in 2014 and 2016, and 90,368 records remained. Then, we removed crime data records from 2014 and 2016, and about 260,000 records remained. Next, we grouped the red light violations and crimes by zip code and removed the records that did not have latitude and longitude. The final, processed file had 78 zip codes in the Greater Chicago Metropolitan Area, along with the crime and traffic camera violation statistics for the year 2015. For correlation analysis, we also removed the records for the zip codes that did not have any traffic cameras. This left a total of 48 zip codes that we used for correlation analysis. 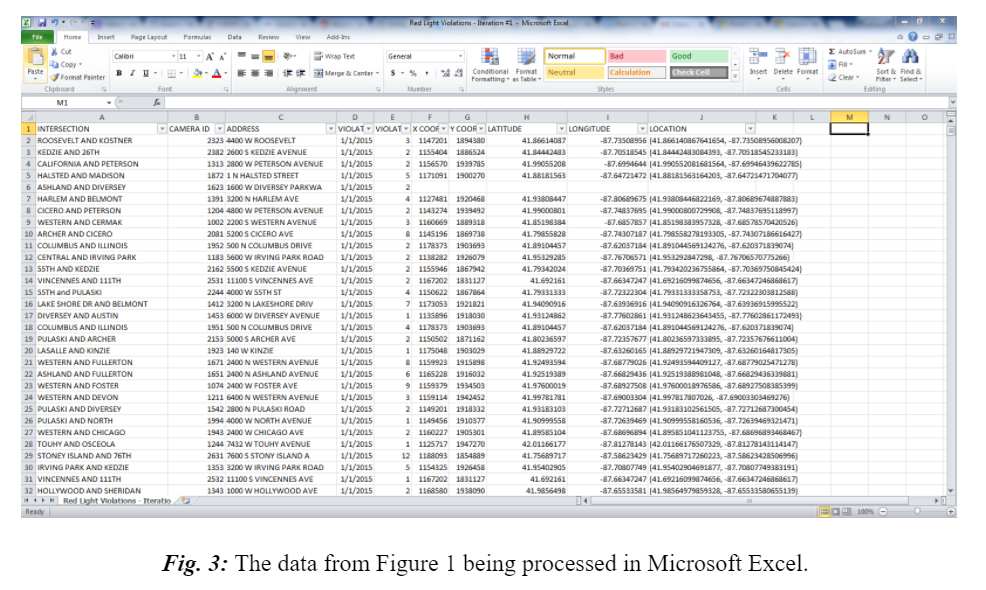 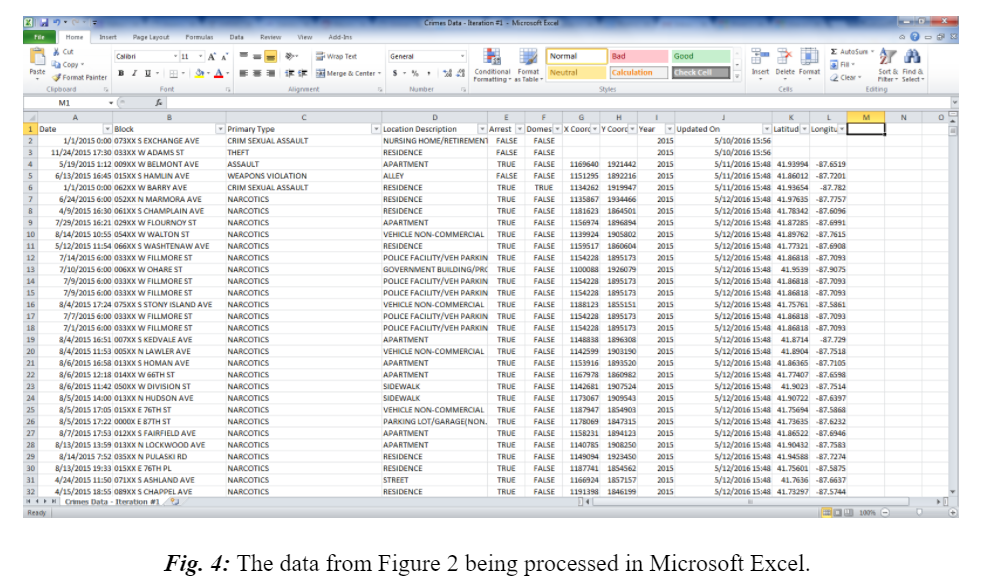 We analyzed the data in ‘R’ as in Figure 5. After filtering out the data we didn’t require, we calculated the Spearman rank-order correlation coefficient between the red light traffic violations and various types of crimes in different zip codes in Chicago. 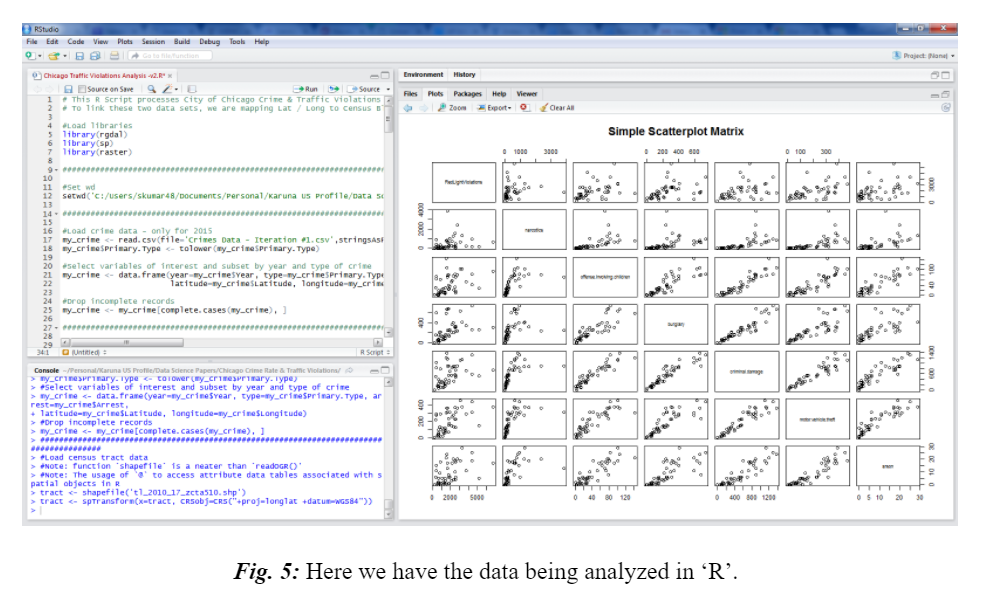 We can therefore see that areas having higher prevalence of motor vehicle theft are most prone to red light traffic violations, which makes sense because thieves would tend to drive stolen vehicles with abnormal levels of urgency. Then at 0.57, we have burglary which also seems legitimate. So, we have answered the first two of our questions; traffic violations and crime are related, and they are related by the derived coefficients. To answer our third question, we went back to our excel document. We then filtered out the zip codes with traffic enforcement cameras installed. We saw that there were 30 remaining records of zip codes where there are no traffic enforcement cameras. When we look through the data, we see that some of these zip codes with no traffic enforcement cameras, for example 60615 and 60653, actually have very high numbers of motor vehicle theft and burglary (as well as offense involving children) which we can see in Figure 6. This brought us to the conclusion, that the Chicago Police Department should install more traffic enforcement cameras in zip codes like these where the indicating factors seem very strong, to ensure more effective efforts in traffic management & control. 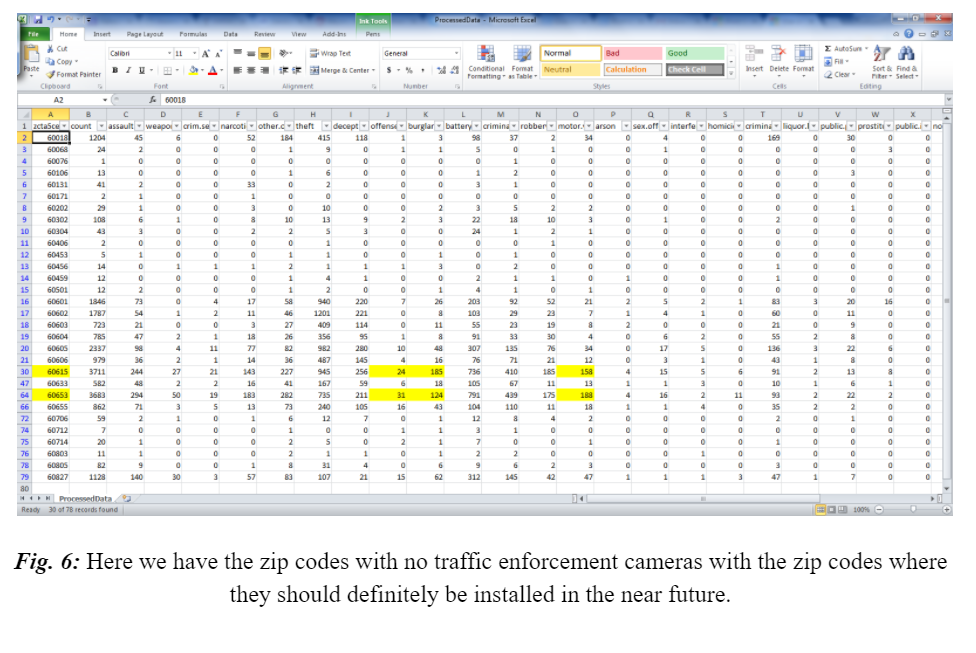 In data science, insights are the understandings that we gain from the analytical method that we carry out. So, what did the data tell us? We discovered, after much data processing, that certain categories of crimes were more indicative of the probability of the occurrence of red light traffic violations in an area. Then, after further processing and analyzing, we discovered that there were particular zip codes where these types of crimes were significantly frequent but there were no traffic enforcement cameras yet installed.

So from the insights we have gained, we can reach the inference that the Chicago Police Department should pay more attention to areas in which motor vehicle theft, burglary, offense involving children, arson, criminal damage, sex offense, and narcotics, in that order, are most common so that they can focus their attempts to prevent traffic violations appropriately. Two examples of areas where traffic enforcement cameras could efficaciously be installed are the zip codes of 60615 and 60653.

Recommendations for Further Work in the Future

If we were to repeat this project, it would be a good idea to use smaller sections of cities as the units of the location variable as this would yield more refined insights from the data. The zip codes are very coarse resulting in the loss of context. Using more contained and specific divisions of Chicago definitely would have given much higher correlation coefficients. So, if carrying out this project in the future, I would recommend using blocks or intersections instead, that is, if the required data exists. I would also suggest considering more variables such as population density, income levels, or demographics. 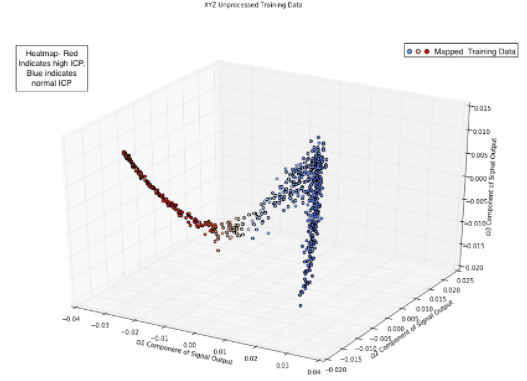 A Prudent and Democratic Approach to Regulating CRISPR/Cas 9