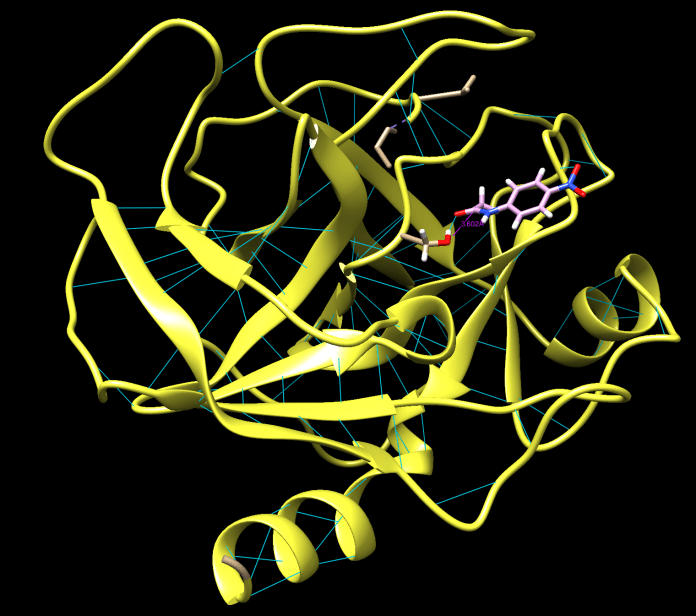 Proteases, enzymes that hydrolyze peptide bonds, have tremendous implications ranging from the treatment of diseases to chemoselective bond cleavage in chemical synthesis. The kinetics of proteases can be monitored spectroscopically using nitroanilide substrates, many of which are structurally complex and often require long, multi-step syntheses. This study sought to determine the rate of hydrolysis by various serine proteases—nattokinase, trypsin, and pepsin—on two highly simplified 4-nitroanilide colorimetric substrates—4-nitroacetanilide and 4-nitrobenzanilide—via UV-visible (UV-vis) spectroscopy. Each substrate was chemically synthesized in one step via acylation of 4-nitroaniline. Solutions of both substrates were prepared, incubated with buffered enzyme solutions, and enzymatic cleavage of the amide bond was spectroscopically monitored on time-course. After experimentation, it was determined that nattokinase and trypsin were able to hydrolyze the amide bond of 4-nitroacetanilide at 25e-10 moles per hour and 4e-10 moles per hour, respectively, while the results for pepsin were inconclusive as 4-nitroacetanilide is unstable in acidic conditions. None of the proteases were able to hydrolyze the amide bond in 4-nitrobenzanilide. Computational studies suggest that this is a result of differences in amide reactivity between the two substrates rather than differences in binding affinity to each protease. We hope our results will provide insight into the hydrolytic capabilities of serine proteases.

Proteases are an important class of enzymes that hydrolyze peptide bonds; we decided to focus on serine proteases because they constitute over 1/3 of all known proteolytic enzymes. Serine proteases have a catalytic triad consisting of a serine nucleophile, histidine base, and aspartate acid.1,2 Nattokinase is a biologically active serine protease currently being investigated for the treatment of cardiovascular diseases by hydrolyzing fibrin.3 Fibrin is a protein responsible for the formation of fibrous meshes found on atherosclerotic plates. These fibrous meshes are further calcified, becoming an advanced plaque that covers a necrotic core, which is vulnerable to cap rupture—forming blood clots and resulting in thrombosis.4 By hydrolyzing fibrin, nattokinase has been shown to delay thrombus formation with near-full inhibition at 75mg/kg 2. In this way, nattokinase is a natural blood thinner and can be used to treat cardiovascular disease. Pepsin is a serine protease that breaks down proteins into smaller peptides found in the stomach, where it helps digest the proteins in food and has applications in laryngeal diseases.5 Trypsin is also a serine protease produced in the pancreas responsible for the metabolism of peptide bonds in the small intestine.6 Given the biological significance of trypsin, it is associated with the treatment of many diseases, such as immunoreactive serum trypsin in pancreatic diseases.7 The ability to quantify the rate of hydrolysis by these enzymes is essential to understanding their catalytic ability.

4-nitroanilide substrates are commonly used as protease substrates because the release of 4-nitroaniline is easily tracked on a spectrophotometer. Additionally, 4-nitroaniline is a relatively cheap and safe reagent to use. 4-nitroanilide substrates containing peptide chains, such as L-Alanine 4-nitroanilide hydrochloride and N-<#ALPHA>-Benzoyl-L-arginine 4-nitroanilide hydrochloride (Figure 1A), are commercially available from Sigma-Aldrich and other suppliers, where the peptide chain functions as the enzymatic recognition site. Enzymatic cleavage of the 4-nitroaniline amide bond releases 4-nitroaniline, which can be tracked spectroscopically at 380 nanometers (nm).8 However, many of these compounds require multi-step syntheses, which can prove to be time-consuming and uneconomical to produce.9, 10 By simplifying the syntheses of these colorimetric substrates, the function of the compound still remains the same, but both time and resources are conserved in their preparation. In this study, we reported the hydrolysis kinetics of three serine proteases using two highly simplified 4-nitroanilide colorimetric substrates. A general experimental overview is discussed (Figure 1B). Subsequent docking experiments revealed that differences in enzymatic hydrolysis of the amide bond in our substrates is most likely a function of differences in native reactivity rather than differences in binding to the enzymatic active site.11

4-nitroacetanilide was synthesized via acetylation of 4-nitroaniline. 4-nitroaniline (1g, 1 eq., 7.2 mmol) was added to a vacuum-dried round-bottom flask equipped with a stir bar, along with 15 eq. acetic anhydride and 10 mL acetonitrile. The round-bottom flask was septum-sealed and stirred for 24 hours and monitored to completion via thin-layer chromatography (TLC). Unreacted acetic anhydride was quenched with methanol and the crude material was concentrated in a rotary evaporator. The product was extracted 5 times with ethyl acetate and aqueous sodium carbonate. The resulting organic layers were dried over anhydrous sodium sulfate and concentrated in vacuo to yield yellow crystals of 4-nitroacetanilide in 89% yield. Experimental yield was determined by dividing the grams of product recovered by the theoretical yield. The reaction schematic is shown (Figure 2).

4-nitrobenzanilide was synthesized via reaction between benzoyl chloride and 4-nitroaniline. 4-nitroaniline (1.0g, 1 eq., 7.2 mmol) was dissolved in methylene chloride and added to a vacuum-dried round-bottom flask equipped with a stir bar, along with 1 eq. triethylamine. The round-bottom flask was septum-sealed and stirred until 4-nitroaniline was fully dissolved. Then, 1.2 eq. benzoyl chloride was injected through the septum and into the reaction mixture. A precipitant was observed after 3 minutes and the reaction was monitored to completion via TLC. Unreacted benzoyl chloride was quenched with water and the crude product was concentrated in vacuo. The product was extracted 5 times with ethyl acetate and aqueous sodium carbonate. The resulting organic layers were dried over anhydrous magnesium sulfate and concentrated in vacuo to yield yellow crystals of 4-nitrobenzanilide in 99% yield. The general scheme of the reaction is discussed (Figure 3).

Both compounds were characterized by UV-visible spectroscopy (BioRad SmartSpec 3000 spectrophotometer) and FTIR (Thermo Scientific iS5 Nicolet FTIR spectrometer, iD5 ATR assembly). Full characterization of 4-nitroacetanilide and 4-nitrobenzanilide can be found in the online supplemental information Figure 1.

Preparation of Standard and Testing Solutions

1.0 mM stock solutions of both 4-nitroacetanilide and 4-nitrobenzanilide were prepared in 95% deionized water and 5% DMSO. Testing solutions at various concentrations—0.1 mM, 0.2 mM, 0.5 mM, and 1 mM—were prepared from the stock solutions. Enzyme buffers were prepared with 15 mM trisaminomethane and 100 mM sodium chloride in deionized water. Separate substrate and enzyme solutions were also prepared as controls to account for enzyme and substrate degradation over time. For each enzyme (nattokinase trypsin, pepsin), the solution was adjusted to 0.5 mg per mL of buffer. No further pH adjustments were needed for nattokinase or trypsin as the buffer was already at a pH of 8; however, for pepsin, the buffer was adjusted to a pH of 1.5 with 1 M HCl since pepsin functions best in acidic environments. All samples were parafilmed and placed in a large shelved incubator and kept at a constant temperature of 40°C unless otherwise specified.

The maximum absorbances for 4-nitroaniline, 4-nitroacetanilide, and 4-nitrobenzanilide were determined to be at 380, 320, and 325 nm, respectively. Solutions at various concentrations—0.1 mM, 0.2 mM, 0.5 mM, and 1 mM—were prepared to create Beer’s Law graphs for the three compounds. Beer’s Laws graphs were used to derive extinction coefficients, which were necessary to calculate the rate of enzymatic hydrolysis. Full UV-vis spectra and extinction coefficients for each compound at 320, 325, and 380 nm were collected and can be found in the online supplemental information Figures 2, 3, 4, and 5.

A BioRad SmartSpec 3000 spectrophotometer was used to collect all UV-vis data.

After the substrate and enzyme solutions were prepared, one mL of the stock substrate solution and one mL of the buffered enzyme solution were added to a cuvette. Cuvettes were placed into the spectrophotometer and absorbances were collected at 320, 325, and 380 nanometers. Spectra was collected before incubation and after various lengths of incubation. A full UV-vis spectrum* of nattokinase incubated with 4-nitroacetanilide at various time points was recorded (Figure 4). A photograph of our experimental cuvettes is shown (Figure 5).

*Full UV-vis spectra were not recorded for any other experiments.

Geometrical optimizations were done in ORCA using the 6-31g(d) basis yet, optimized structures were docked via SwissDock, and all molecular docking was visualized in Chimera in order to identify potential differences in binding affinity—giving predictive binding affinities of various substrates with respective enzymes in silico. The PDB codes for nattokinase, trypsin, and pepsin are 4DWW, 4J2Y, and 3UTL, respectively. The binding pocket interactions between 4-nitroacetanilide and trypsin are shown (Figure 6). The binding affinities of each docking experiment are shown (Table 1). Other binding pocket interactions can be found in the online supplemental information.12

In conclusion, nattokinase demonstrated the highest rate of hydrolysis on 4-nitroacetanilide. Trypsin was also able to successfully hydrolyze the amide bond in 4-nitroacetanilide, but at a slower rate compared to nattokinase. We hypothesize nattokinase demonstrated a rate of hydrolysis sixfold to that of trypsin because nattokinase has lower substrate specificity. Results for pepsin are inconclusive due to the instability of 4-nitroacetanilide in acidic conditions. In acidic conditions, the carbonyl oxygen of 4-nitroacetanilide is protonated, which causes the carbonyl carbon to have a partial positive charge. A water molecule subsequently attacks the carbonyl carbon, breaking the amide bond, and releasing 4-nitroaniline. Therefore, we are unable to accurately quantify the hydrolysis kinetics of pepsin. However, none of the enzymes were able to hydrolyze the amide bond in 4-nitrobenzanilide because more energy is required to break the conjugation of the benzoate. Conjugation lowers the overall energy of the molecule and increases stability, thus more energy is required to break the amide bond of 4-nitrobenzanilide compared to that of 4-nitroacetanilide. Our research demonstrated the use of two simple 4-nitroanilide substrates to quantify the hydrolysis kinetics of two serine proteases. We showed that expensive and complex amino acid-based substrates are not necessary to gain insight towards the activity of enzymes. We also discovered limitations in the use of serine proteases to break conjugated amide systems. Based on the results of our enzyme hydrolysis data, we plan on extending our work to quantifying the effectiveness of protease inhibitors. We also plan to design and synthesize other 4-nitroanilide colorimetric substrates to determine the hydrolysis kinetics and substrate specificities of various enzymes, in an effort to better understand their biological mechanisms. Lastly, this study demonstrated the feasibility of using biological catalysts to deacylate aniline, and in the future, this could be employed for the chemoselective deacylation of amide containing compounds. We envision an increase in the use of biocatalytic processes as a means towards the sustainable synthesis of complex molecules. The application of enzymes in biocatalytic chemical reactions will unequivocally improve the efficiency and selectivity of otherwise difficult endeavors. 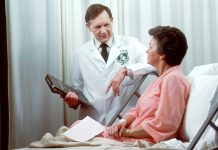